With just two weeks of play left, it was all to play for in Week Seven of the LEC Spring Split.

The penultimate weekend of normal LEC action, with some major games in the playoffs taking place. Could Excel continue to push, would MAD break their losing streak, and could Fnatic close the gap on Rogue? With matches between G2 and Misfits as well, the top four spots are getting heated. With just six spots to play for, it already looks like either Vitality or MAD is going to miss out but which one will it be? First blood went the way of Excel, before MAD picked up one in return on the bot side. However, MAD had to overextend to claim it, as they lost three more kills in return. Excel went back topside for yet another kill as they moved to 1.5k ahead as the clock struck 10-minutes. They continued to dominate the fights, with the highlight being right as Baron spawned. Excel was able to knock down three members of MAD as they secured a Baron. Excel moved their lead to 7k with the Baron, as MAD looked out of answers with just 25-minutes on the clock. They reset after Baron wore off as, but they managed to dominate MAD. The loss means MAD is winless in five, while MAD looks to make a late rush for the playoffs. The first two kills went the way of Astralis, however, xMatty (BDS) was able to flip the fight, picking up three kills at the end of the fight. Despite the first blood, BDS was 1.5k ahead, with four kills secured by xMatty on the Jinx. BDS continued the early lead into the 15-minute mark, carving out a 4k lead. With Baron on the Rift, Astralis capitalized on BDS being with major CDs to take a fight. Astralis took down three members of BDS but they backed away from the Baron. BDS took a fight in the bot-side river before turning it into a Baron as Astralis moved on to the back foot. With Baron in play, Astralis pulled the trigger and defended their base. They took down four members of BDS and saved their base. With a second Baron on the table, Astralis claimed it but BDS won the fight and took the victory off the back of it. 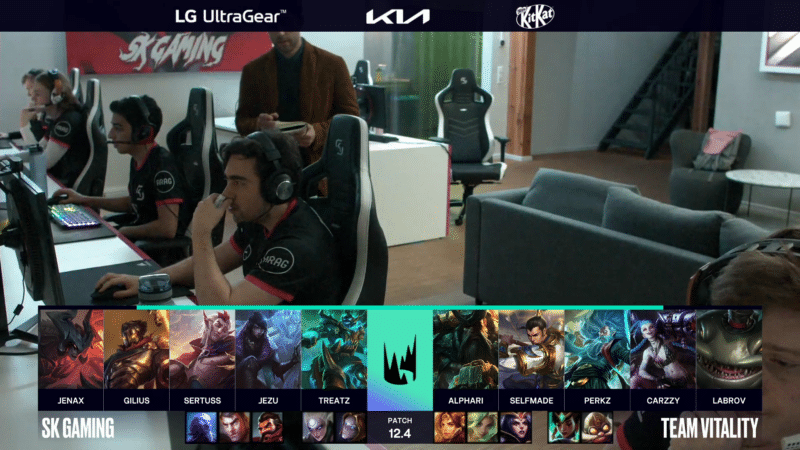 It was first blood secured for Vitality in their crunch matchup with SK. SK found a way back with two more kills but Vitality maintained a 1k lead. SK continued with their team fight wins, picking up a 3-for-nothing and leveling up the gold lead. Once again, SK forced another engagement in the mid-lane, with Vitality completely blindsided by it. Despite so many members of Vitality going low, SK is only able to secure the one kill. Vitality started to find their way back into the game, claiming a Soul Drake while moving to 4k ahead. SK continued to make desperation plays across the map. With the Baron secured, Vitality were able to open up the SK base, securing two inhibitors as they ran away with the lead.

SK picked up a huge team fight win, chasing out all the members of Vitality and knocking down four of them. Sadly for SK, with Alphari left alive, the Super Minions were able to secure victory for Vitality. The battle of the top of the LEC saw Rogue claim a first blood but Fnatic take two fights to win the early duel. The early game stayed close, though Fnatic did manage to carve out a 2k lead. Another close fight but once again it was Fnatic that came out on top, as they pushed Rogue back into their base. Fnatic increased their lead to 5k. As we move into the mid-game, the match has calmed down ahead of the Soul Drake spawning for Fnatic. They remain in a 7k lead as they looked to force plays out of Rogue.

Fnatic is patient around the Soul Drake but when they do finally pull the trigger they ace'd Rogue before moving for the base. They decide to ignore the Baron as they claimed the victory and closed the gap to Rogue to just one game. The win secured playoffs for Fnatic. G2 picked up the first blood and secured a 1k lead early on. They continued to dominate the Rift heading into the 10-minute mark. Picking up five kills and securing a 4.5k lead. Their dominance continued into the mid-game, with Misfits lacking any sort of response to what G2 was putting out. With only 17-minutes on the clock, G2 had secured a 14k lead, with the bot-lane inhibitor of Misfits already gone. G2 then took the mid-lane inhibitor as they looked to end it. Misfits was able to defend their base, but with so much lost already, it looked like the game was over. The very next fight was once again all Misfits as they pulled out the ace and claimed a Baron. From 14k behind, Misfits found themselves within 5k of G2.

G2 looked to have won it, despite Misfits looking all but out of it. Somehow, with a Nexus exposed, G2 wasn't able to take it down, with Misfits once again able to defend it. Somehow, Misfits continued to win fights, the gold lead was gone by the 30-minute mark as G2 lost all their advantage. Misfits secured Baron, as they now started to push the G2 base and look for the win. Misfits were unable to knock down the G2 base as the two sides go blow-for-blow around the Dragon pit. With Baron back on the map (36-minutes) the gold was even and the game hung in the balance. G2 secured the Baron, with Misfits desperately trying to force them into a fight. They find three members, as it looks like Misfits had found a way to win it. From a 12k gold deficit to a victory.