The LEC action keeps on going in week three, with Fnatic having lost to Rogue on day one. They faced an old foe in G2 Esports on day two.

The first two weeks of the LEC saw some great action. After Vitality struggled in week one, they hit back last week with a 2-0 victory and started this week off with a win on day one. At the top of the table, Rogue became the only unbeaten side, as they looked to create daylight between themselves and Fnatic. At the bottom of the LEC, a four-horse race was hotting up, as Astralis continued to lose. BDS picked up a big day one victory, as they looked to overtake Excel. 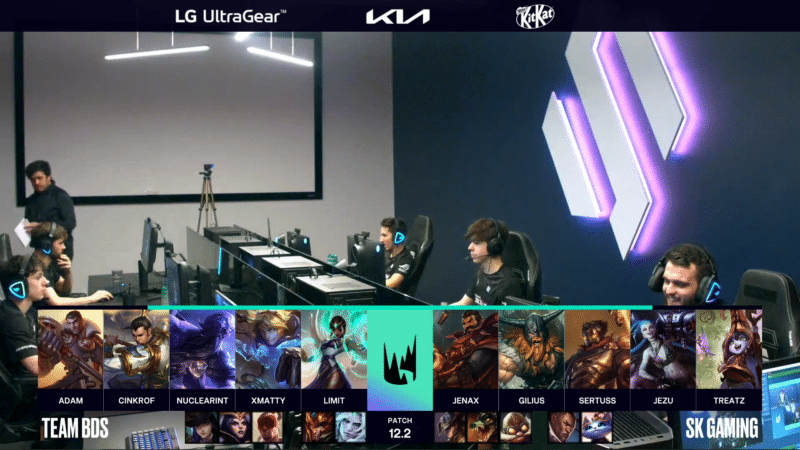 In a bottom-of-the-table clash, it was BDS that came ahead early with a top-lane dive. BDS quickly ballooned their lead to 2k, despite trading a fight 1-for-1. SK Gaming just doesn't have map control compared to BDS. BDS continued to pick up advantages, with SK falling further behind. SK tried their best to stop BDS from securing the Soul Drake. Sadly for SK, they lacked the follow-through to make it stick. BDS was then able to turn that into a Baron as SK looked out for the count. BDS charged through the SK base like a hot knife through butter. The win put BDS onto 3-4 as they get off to a solid start to life in the LEC. 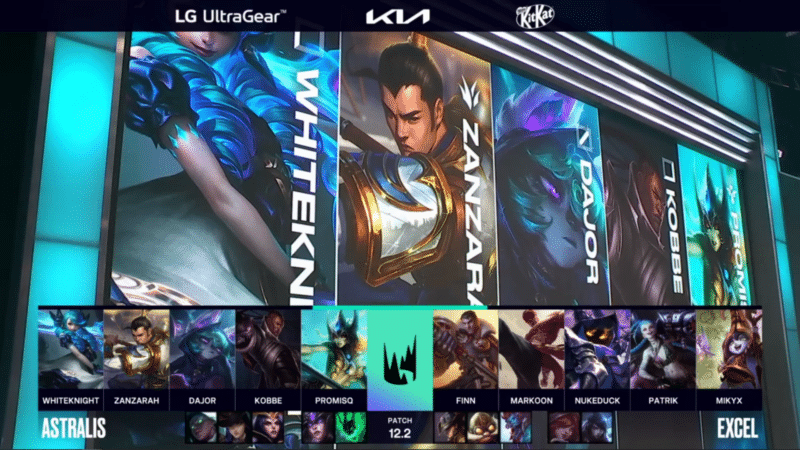 Excel got off to the perfect start, picking up a double kill in a cross-map play. Astralis did manage to fire back moments later, with XL 1k ahead. Excel moved to 3.5k ahead by the 19-minute mark, as they choked Astralis off the map. Despite their best attempts in the mid-game, Astralis were unable to get onto the map in any significant way. Excel was 4k ahead at 25-minutes as they looked to force a Baron. Excel made the ultimate mistake, forcing the Baron, and they lost the 50/50. They won the fight post-Baron, but Astralis had reduced the gold lead to just 2k. A 1-for-1 trade in a 5v5 fight almost ended in disaster for XL after Patrik got pinned. Ultimately, it's even and XL remained 5k ahead.

XL managed to hold on and picked up a massive win as they look to move away from the bottom teams in the LEC. As for Astralis, they moved to 0-7 with just three games left in the first round-robin of Spring Split. 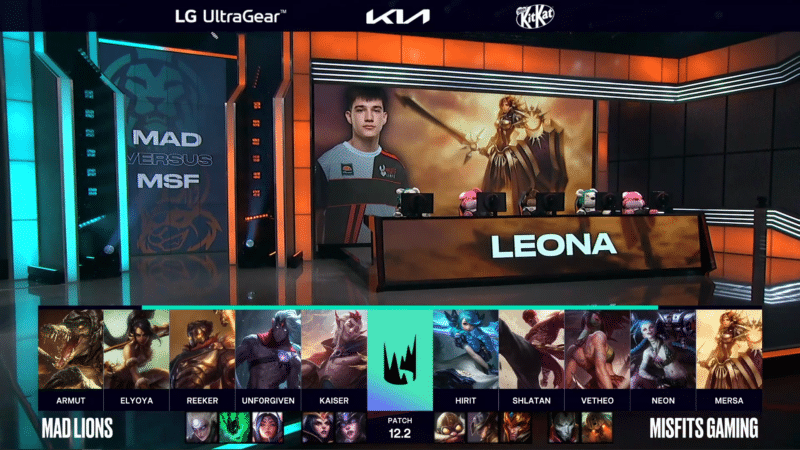 The game began with a massive first blood was secured by Misfits, as they came out victorious in the bot lane 2v2. Misfits were able to maintain the lead they picked up, moving to 1k ahead. MAD made an error while trying to force out a play of Misfits. MAD picked up two kills but gave over 2 of their own as Misfits secured the Rift Herald. Misfits continued to make plays across the map as they maintained the pressure with a 3k lead. While MAD was chasing down a stray member of Misfits, they instead forced a Baron. MAD arrived but moments too late as Misfits secured the Baron.

With that, they took down three members of MAD as they broke down the inhibitor tower. Misfits were unstoppable in the end, as they moved to the same record as MAD. It's a result that MAD wouldn't have expected, and it certainly shakes up the top half of the LEC. 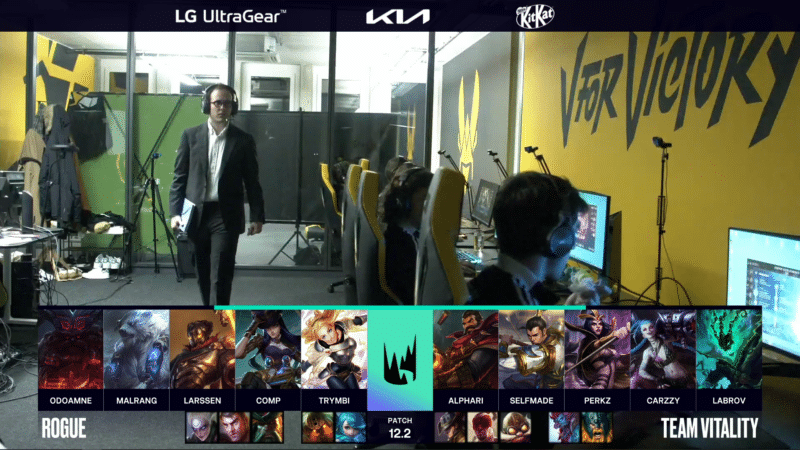 First blood was picked up for Rogue as they looked to stake a claim to the LEC title in week three. Rogue managed to pick up two more kills, however, Vitality did manage to get onto the board with just 600g separating them. The lead did grow to 2k before Vitality managed to get back into the game, closing the gold lead back to 500g. With Baron now live on the map, the gold was still just a few hundred apart. Rogue managed to get two big picks onto members of Vitality as they instantly moved to Baron. It was easily secured as a win condition opened up for Rogue. While Rogue was unable to secure an Inhibitor with the Baron, Perkz was able to almost secure one for Vitality. Rogue fumbled the play as they failed to capitalize on the Baron.

Rogue did manage to secure an inhibitor in their second push, as they continued to push to get a second. They were able to secure a second Baron, despite Vitality attempting to stop it. Rogue headed to the top lane and end the game. A decisive win for Rogue as they move to 7-0, and halt Vitality's advance up the LEC table. 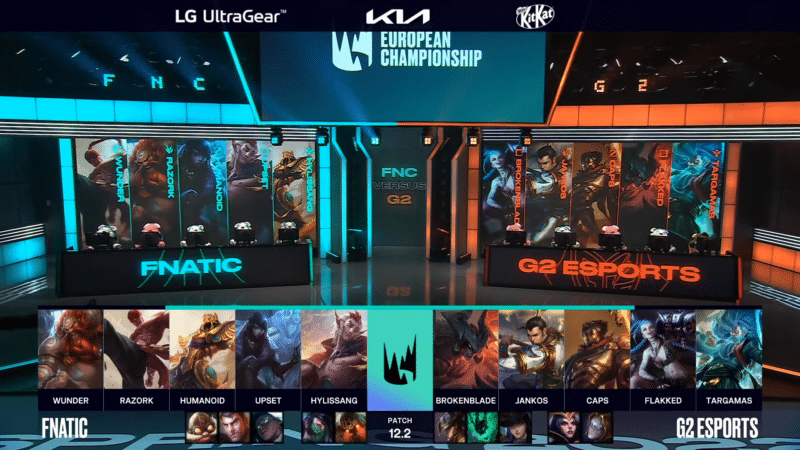 First blood went over to G2 Esports, though the kill was traded back to Fnatic at the end of the play. Two kills over to Fnatic next, as they execute a lovely play in the mid-lane, moving them 1.3k ahead. A quiet early game, but Fnatic took a 2k lead into the 15-minute mark, as they have control on every lane. When it mattered, G2 came alive in the first major team fight, picking up two kills. Despite this, Fnatic remained in the lead as they continued to gain momentum across the Rift. Fnatic got a top lane tower, but G2 was able to punish them on the retreat. They attempted to start the Baron, but Fnatic was able to stop them.

G2 picked up another pick team fight win, as they neutralized the gold. G2 won the next fight as well, picking up two more kills as they came online in the game. Baron secured, and with the Soul Drake spawning for Fnatic, G2 was able to secure it. Fnatic make a huge Baron steal from under the noses of G2, but they couldn't get out in time. G2 aced them in the fight, and they turned that into a win. That win saw G2 move to equal placing in the table with Fnatic, after a Fnatic 0-2 week.