The LEC returns for day two of the week one Super Week action.

Day one didn’t rock the boat too much, though the game one victory of MAD Lions against Vitality is easily the biggest shock. Providing you, like us, predicted Vitality as your top picks for Spring 2022. The final game of the day between Fnatic and Vitality was the one to watch, even picked as the “Game of the Week” by the LEC. Misfits first blood. In one of the most active early games of the weekend, Misfits were able to get first blood. Rogue, however, got back into the game almost immediately, picking up three kills. Things calmed down towards the 10-minute mark, with the kill lead in Rogue’s favor, 5-3. After the crazy first 10-minutes, the second saw just one kill each. Though during this time Rogue did manage to inflate their lead to 2.5k, the match remained tightly poised. From that point on, Rogue was able to stay ahead in the match and secure their second victory of the weekend. Excel picked up an early first blood, but the game was perfectly balanced for almost its entirety. Despite that, Excel looked the most like in the early to mid-game, however, BDS pulled ahead around the 35-minute Baron buff. Shortly after picking up the Baron, they got two massive picks on Excel as they crumbled. BDS picked up a massive first win of their LEC debut campaign, with Excel left licking their wounds. 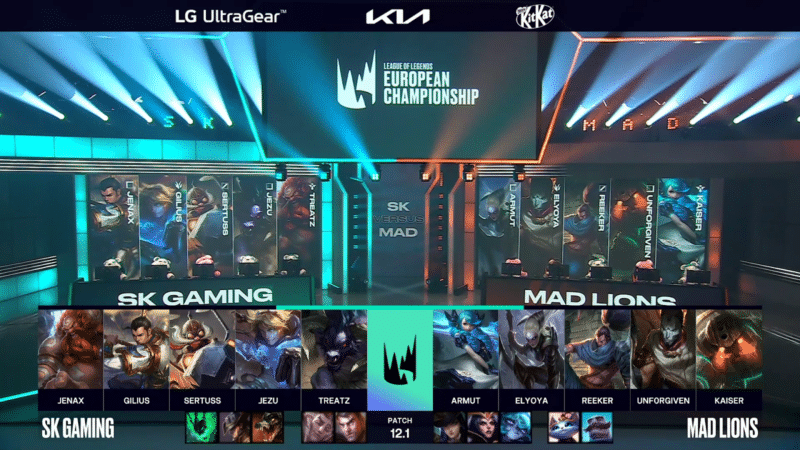 It was MAD Lions who, as expected, took an early lead in the game. With 13-minutes on the clock, they’d carved out a 2k lead for themselves, with SK clinging on. SK started to get back into the game, picking up three Drakes to no reply from MAD. SK kept up that pressure, turning it into a fourth Drake and starting to carve out a 4k lead. The back-and-forth continued late in the game, with MAD coming back into it after securing a Baron. SK looked to be on the ropes as the match looked destined to be decided by one big play. Finally, after 54-minutes on the clock, SK pulled off a massive shock to shut down MAD. G2 started the game off well and managed to take the early lead throughout the early game. With 14-minutes on the clock, they’d already amassed a 3k lead. While G2 continued to maintain a massive lead, Astralis continued to poke away and steal away gold. Astralis risked their entire game on a play, but G2 spotted it out as they secured the Baron and neutralized Astralis. The game looked like it was getting off to a good start for Vitality as they caught out Wunder under his tower. However, Wunder managed to outplay them all to collect two kills, and one assist for himself, with Humanoid coming in to clean up. Despite that awful start, Vitality managed to claw their way back into the lead over the next 5-minutes and moved to 2k ahead. Vitality had a handle on the game until the mid-20 minute mark when Fnatic managed to win a big fight, and claim a Baron. Vitality was still in a gold lead, but it had shrunk massively. Another massive team fight victory for Fnatic and it was game over for Vitality. The LEC “Super Team” is unable to find a victory in their first two days of the LEC, as attention turns to Sunday.