With the playoffs in sight, it's time for teams to make their mark on the Spring Split.

Rogue had a week to forget in week five. They'll need to refocus and get some more wins on the board, with G2 and Fnatic just one victory behind them. Playoffs spots are starting to heat up, with Misfits sitting in fourth with Excel one win behind them in fifth. The battle for the sixth spot is where most people's attention will turn, with MAD and Vitality both desperate to qualify. 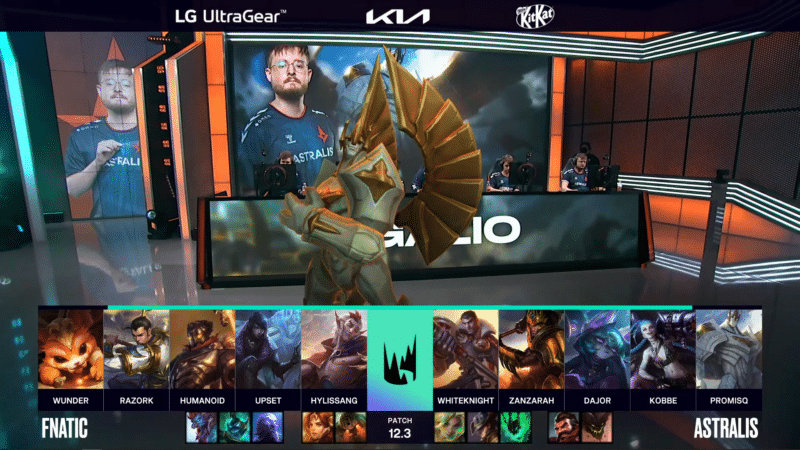 After a 30-minute delay due to a technical issue, it was Astralis who picked up the first blood. It was turned into a second soon after, as Astralis took an early lead. Astralis looked to be carving out a lead before Fnatic picked up three kills within seconds. The play at the mid-lane tower push saw Fnatic take a 1k lead. Astralis tried for a Hail Mary play on the bot side but Fnatic was able to come out on top once again. By the 16-minute mark, Fnatic had a 3k lead. We got our first 5v5 at the 21-minute mark, with Astralis coming out on top with a 2-for-1 advantage. The next fight is over the Baron and it's once again all Astralis. All five members of Fnatic are taken out as Astralis secured an easy Baron.

Astralis were able to secure the Soul Drake as they brought the gold even. The second Baron spawned and it was Astralis once again who claimed it, with Fnatic being pushed off the objective. Elder was next and despite Astralis picking up two early picks, they split their priority as Fnatic came away with a one-kill advantage.  Both teams respawned as Fnatic picked up the Elder Drake but Astralis picked them off after the fight as they secured another shock win. 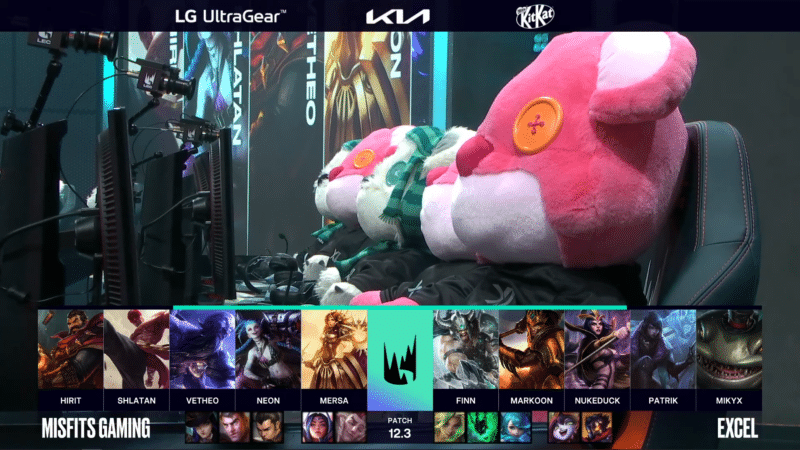 Misfits pick up scrappy first blood, with a second kill picked up and two for Excel in return. It's an active early game, with the scores at 4-3 in favor of Misfits at the 8-minute mark. The endless combat hadn't abated by the 12th-minute, though Misfits remained just shy of 2k ahead with a Rift Herald still to use. Misfits continued to extend their lead, claiming a second Drake and moving 4k ahead. Excel finally found a big fight victory, taking a 1-for-3 team fight win. Sadly for Excel, there's nothing to play for on the map.

It was short-lived, however, with Misfits winning in the next fight. Misfits claimed the Baron, as they increased their lead to 6k. Despite being 6k behind, Excel still does enough damage in a fight to half Misfits. The game continued into the 30-minute mark with Baron back in play. Misfits did manage to claim the Baron as they looked to pressure the Excel base. Misfits were able to end it, as they moved to joint points with Fnatic. 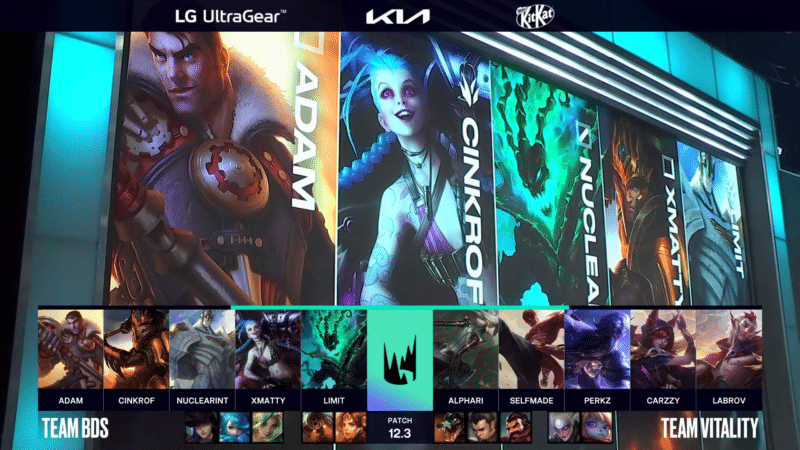 First blood was secured by BDS in this crucial match for them, as they looked to make a late run to playoffs. BDS maintained the 1.5k lead into the mid-game. It's a slow and methodical game being played by both, despite BDS maintained their slim 1k lead. With just seven kills picked up by the 30-minute mark and with Baron on the map, it looked like the game would end in one single objective fight. Vitality wins the fight around the Soul Drake, despite BDS claiming it. The gold lead had flipped to Vitality as they looked to end having claimed the Baron.

Elder Drake is the next major objective, and Vitality once again wins the fight 4-for-1, though they don't claim the Elder. After failing to take down the bot lane inhibitor, Vitality went back to claim the Elder. The Elder buff is enough of a threat for Vitality to force into the BDS base and claim a victory. BDS were unable to make their early game lead count, as their playoff hopes fade. 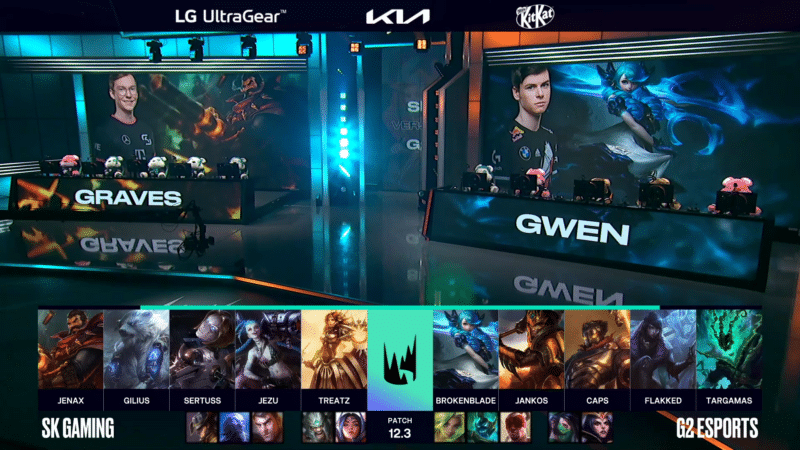 An important first blood for SK as they try to spring another upset today. While G2 found kills shortly after, SK maintained their slight lead. SK finally got the big fight win they needed, acing G2 on the spawning of the fourth Drake. They turned that into a Baron as SK finally move into a commanding position. SK was not able to penetrate the G2 base with Baron, however, it did give them more control on the map and set them up for a third Drake. Into the 30-minute mark, G2 was struggling to get into the game with the second Baron spawning. SK claimed a Soul Drake as G2 focused on Baron pressure. With SK risking a 50/50 it's stolen by G2 as SK allows a Baron to be flipped.

Moving close to the 40-minute mark, SK claim an Elder while G2 attempted to win the game while SK was distracted. SK was able to defend the base and with Elder buff activated SK was able to win the game. G2 probably had a moment in the end to win it, had caPs just hit the blast cone to delay the recalls. G2 fails to capitalize on Fnatic's loss, and Rogue remains top. The win saw SK climb the table as they make a late dash for the playoffs. 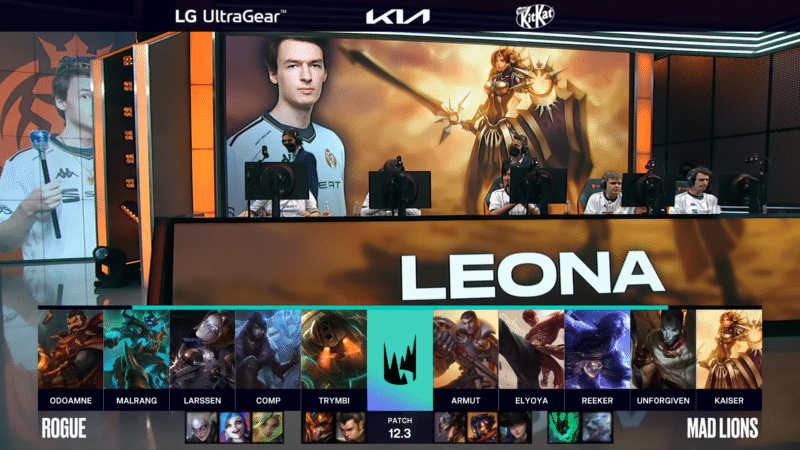 In a match that MAD needed to win early, they gave over first blood to Rogue as they faced an uphill battle. MAD got on the board a few minutes later, though it cost them four members heading bot-side to secure it. Rogue claim the first team fight victory around the Rift Herald, as Rogue moved to a 500g lead. The next fight went the way of MAD, as they won a fight 2-for-3, though the advantage remained on Rogue's side. MAD continued to force plays across the map but they fail to gain anything significant from them. The third Drake is when Rogue decided to stop MAD, picking off two members and claiming their first Drake. Rogue moved towards the Baron with three members of MAD left alive. With Baron and a 7k lead, Rogue slowly pulled apart the MAD base and they looked to slowly close out the game.

From that point, Rogue was able to shut out MAD and claim the victory. After an 0-2 week last week, they find the win and move two wins ahead at the top of the LEC. As for MAD, the pressure continued to mount on their pursuit of a playoffs spot.