The LEC action keeps on going in week four. With only one team left unbeaten, can Rogue maintain their lead at the top?

We've had three great weeks of LEC action. Now we move into the penultimate week of the first round-robin, the LEC picture is starting to take shape. Rogue sits two wins ahead at the top of the table, while Astralis are cut adrift at the foot. With Fnatic dropping wins, and G2 Esports on the climb, things are hotting up. It's been a tough few weeks for Astralis but they got the game off to a perfect start. Picking up a double kill in the bot lane, Astralis stormed to a 1k lead within 4-minutes. A fight at the Rift Herald went the way of Astralis, it's a 3-for-2 trade in their favor. Astralis continued to dominate across the map, despite SK picking up a Rift Herald. By the 18-minute mark, Astralis were 3k ahead. The first major 5v5 kicks off at the 26-minute mark. With Astralis leading the game, SK were able to get a massive team fight and ace Astralis. They picked up the Baron as they took a 3k lead. SK won the next fight, as Astralis failed to take advantage of their early lead. Defeat keeps them rooted to the bottom of the LEC, while SK picked up their second win. 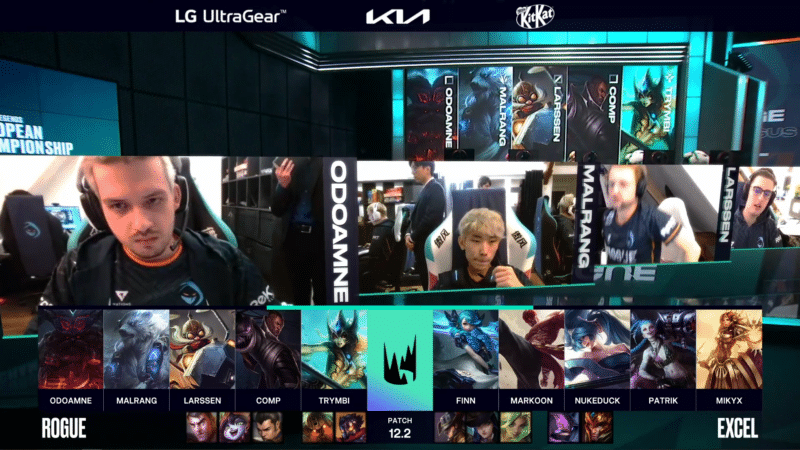 Excel tried to force an early play on the Rogue bot side of the map. While they did pick up a kill, first blood was handed over to Rogue. Rogue got into an early lead, despite Excel picking up the majority of the kills. As the game approached 20-minutes, Rogue were 3.5k ahead. They were able to force a fight as Baron spawned, knocking down four members of Excel and claiming a Drake. They turned that into a Baron as they breezed into a 8k lead. Rogue forced into the Excel base and the game was over. Excel couldn't stop the onslaught as Rogue maintained its unbeaten run. A big start for Misfits, picking up the first blood in a match that would give them breathing room between themselves and Vitality. Vitality were able to claw their way back into the match, moving into a 1k lead at 10-minutes. Vitality took that lead into the next 10-minutes, though only managing to increase it to 2k. With Baron on the map, a decisive 5v5 look imminent. Vitality flipped it, picking up an ace, a Baron and a 7k lead. With Baron, Vitality knocked down inhibitor turrets in two lanes, however, they aced Vitality as Misfits stay alive in the match. Vitality is able to continue the momentum and win the game, bringing their LEC record tied with Misfits. It's a disaster start for BDS, as Adam dies twice before a minion has been killed. Getting picked off at level one, then as he returned to the lane he died again. G2 turned that into a 1k lead by the 8-minute mark, as BDS struggled. They managed to stabilize into the mid-game, as they started to wrestle control back from G2. BDS tried to force a fight around the Baron but two members are destroyed on the engagement instantly. G2 were able to take down the Baron as they moved 5k ahead. As Baron faded, G2 moved to 8k ahead. Despite that, BDS were able to keep their base intact. G2 picked up a second Baron of the game as they looked to end. This time G2 do end, as they kept the pressure on Rogue at the top of the LEC. It's an important first blood for Fnatic. They get it early in the mid-lane as they look to recover from their week three 0-2. More kills went the way of Fnatic, most of them coming on the bottom side of the map. Those early kills put them 2k ahead. Fnatic maintained the lead into the mid-game, moving to 3k ahead. The match was perfectly poised around the Baron, with MAD attempting multiple times to sneak it away from Fnatic.

It was Fnatic who managed to take the Baron after Fnatic caught out Elyoya as they claimed the Baron. Fnatic were able to secure one inhibitor with Baron as they extended their lead to 6k. MAD almost got the fight they needed, despite Elyoya's best attempts, Fnatic was able to win it and secure victory. A big win for Fnatic as they get back to winning ways after a difficult week three.