If you’ve missed the games today, here is a recap of how the LCS Summer Split Week 5 Day 2 went. 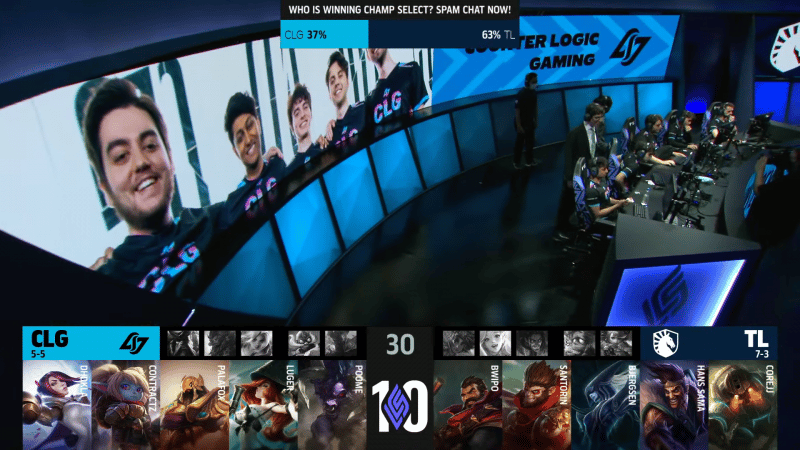 The first game of the day started with a lot of trading in all lanes and multiple summoners used, but there were no kills from the initial fighting. The first blood came from a Santorin gank in the bot lane as they punished the CLG duo for not having their flashes. TL also controlled the top lane which allowed them to take an uncontested first Herald and CLG traded the first drake for it. Still, the gold lead for TL was nearly 1.5k at 10 minutes. CLG found their first kill in a jungle/mid 2v2 from both teams. TL got the first tower in top lane before plates fell but CLG was able to answer with a kill on Bwipo, still the gold lead was extended to 2k. CLG controlled the mid game objective by taking the second Herald and they also took the second drake, even though TL contested it 5v5. But, TL flexed their teamfighting muscles at the third drake by getting two kills and delaying CLG’s soul attempt. Despite a 4k lead for TL, CLG forced a Baron and got 4-kills in the ensuing fight. They could not get the Baron but they were rewarded with the soul point.

Bwipo was very ahead of Dhokla as he took a solo inhibitor in the bottom lane, but on the other side CLG won a big 4v4 and they got the Baron after killing the enemy jungler. Before their soul point, CLG had nearly tied the gold difference. Even though it was a 5v5, TL chose not to contest and gave up the Ocean Soul. TL tried to fight before the siege, but Palafox found a solo kill on a flanking Bjergsen. Now 3.5k gold ahead, CLG pushed their advantage and engaged for one more time. They ended the game after acing TL. 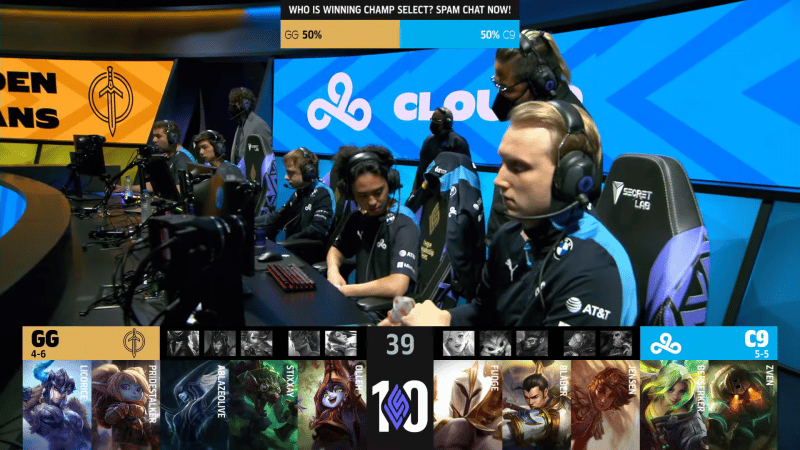 GG had a very aggressive early game with a 3-minute solo kill in the top lane for Licorice and a jungle gank blowing both summs from the C9 ADC. C9 still had enough bot pressure to get the first drake, but GG answered with another top side kill as they pushed their early lead to 1k. C9 started to Rift Herald from the deficit with GG contesting them, in the ensuing fight both teams got four kills each but with the reset map reset, Herald went to GG. GG used it to get the top tower and push their lead to over 2k. Even though C9 got their second drake in the mid game, GG used their top side advantage very well to extend their tower and kill lead and increased the gold difference to 6k at 20 minutes. With this kind of lead, GG was able to get an uncontested Baron as it spawned.

Even with the Baron buff, GG made a misstep in a jungle engage wasting their ults. They got chased down giving away two kills and the soul point to the C9 squad. GG then tried to siege after their Baron, and C9 found two more kills as Jensen had another great Taliyah play and the lead was pushed back to 3k. C9 then found three kills around the Baron which meant they got both Baron and Hextech Soul. Just before the buff ended, C9 found a team fight where they got four kills for zero, and had a 6k gold lead. With the respawn timers long enough, the fight win meant C9 ended the game. 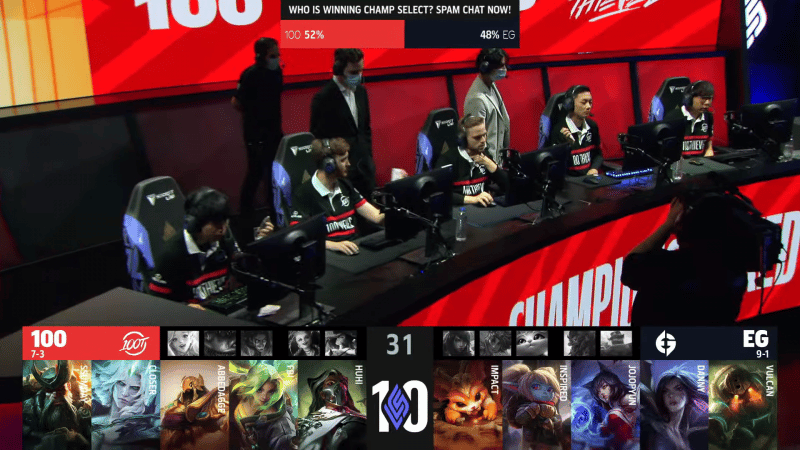 We did not see much early action in the clash of our two top teams. Both junglers mostly looked to cover lanes instead of ganking themselves, and neither of them were interested in an early drake. 100T opted to start the first Herald on spawn, but they decided to just concede when EG showed up with five people. Coming off their reset, EG also got the first Herald, but the gold was still even at this point. Despite a lot of close calls, neither team had found any kills when the plates fell. 100T found the first blood in the mid lane after a great engage from Abbedagge, which allowed them to get their first drake and establish a 1k gold lead. 100T then started the second Herald, and even though they couldn’t secure the objective, they got an ace as Abbedagge got a quadra kill. During mid game, 100T kept finding kills around the map and pushed the gold lead to 3k, but EG still got their second drake of the game. As we got closer to minute 30 game slowed down a lot again, with a 4k 100T gold lead who also had the scaling advantage.

We saw this scaling advantage during the fight in the top lane at the 30th minute as EG got a pick on Huhi but still lost the 4v5. 100T used this win to secure themselves a Baron and increase the gold difference to 8k. EG tried to prevent the siege by picking off Abbedagge, but 100T once again traded two kills back and tried to end by TPing in their mid laner. At this point, they were ahead 10k gold and EG’s two players had not respawned yet, which meant they easily ended the game. 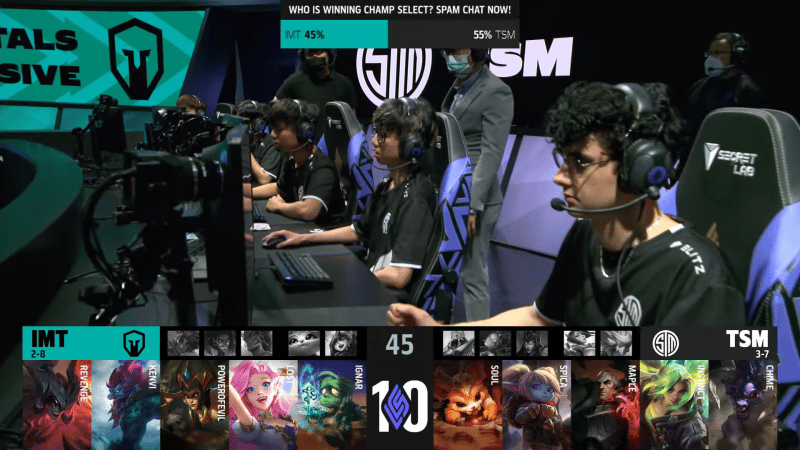 IMT continued with their more active early games this week as Kenvi ganked the bot lane level two after taking his red, and he managed to get the first blood for himself. But TSM answered fast with their own kill as they found one on the roaming IgNar. But even after an early focus towards bot lane from both teams, neither elected to take the drake. Eventually, TSM claimed that objective as they could not contest IMT who took the first Herald. IMT had a 2k gold lead when the plates fell as they took the first tower just before that, even though the kills were tied at 2-2. TSM then contested the second Herald which IMT started. They managed to steal the objective and decided to engage for a team fight. But Revenge’s Aatrox was very ahead as IMT traded three kills for zero and ballooned their lead to 4k. Using their vision control, IMT went for a Baron in a 5v5 and TSM was not in a position to contest.

MORE FROM ESTNN
LoL Patch 12.15 Best Junglers to Climb With

The siege from IMT was very effective with the buff and they got multiple towers in bot and mid lane. Just as their Baron ended, they also got the soul point and had over 9k gold lead with an open bot inhibitor. Around minute 28, IMT made a top side play with a teleport and after a 2-for-1 trade, they secured their second Baron of the game. TSM got caught taking vision before the soul drake and IMT got four more kills after a great engage. With double TPs still available, they went ahead and ended the game. 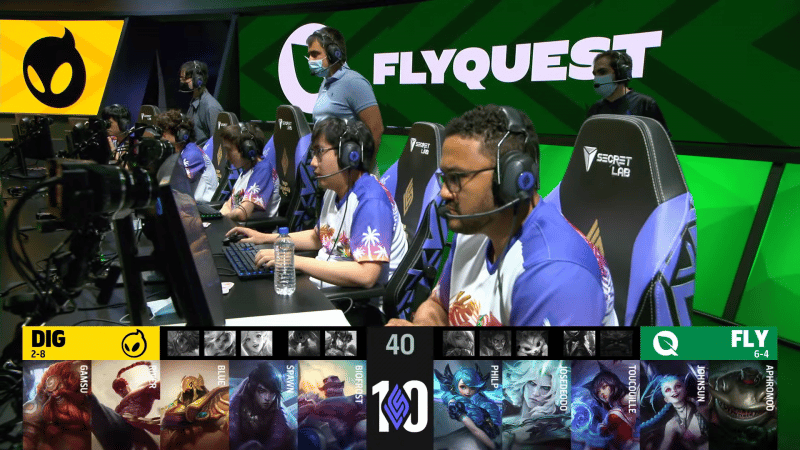 The game started after some delay as we had a technical pause due to some ping issues, and then one more pause at minute 4. There was no action in the game before the second pause.

After the issues were resolved, the game state was very slow. The first action we saw was an attempted top dive from FLY, but Gamsu managed to stay alive. However, they died a couple of minutes later when he got ganked again, and FLY used their man advantage to secure the first Herald. This was the first game of the day where we did not see a sub-10-minute first drake, but FLY still secured it using their bot pressure. While most of the early game was even, Dig got hold of a 1k lead after a bad invade attempt from FLY jungler and top laner. Unfortunately for them, it went away quickly as they got aced cleanly in the fight for the second Herald after a great engage from toucouille. Dig also could not contest the soul point for FLY as they were behind 3k gold and after Jose escaped the engage from Gamsu. While FLY was ahead in the game, Dig had a great call to sneak Baron without the enemy noticing and they were able to secure the objective, but that meant FLY got a free Ocean Soul.

The Baron buff period wasn’t too efficient for Dig, but it at least allowed them to decrease the gold difference to 1.5k. Just before the Elder spawned we saw FLY took a Baron of their own, once again uncontested. The fight happened at the Elder where we saw FLY get the objective after Dig over chased the enemy mid. With the powerful buff, FLY aced the enemy and ended the game.