North American League action is continuing with the Day 2 of the super week and here is a recap of the games.

If you’d like to have a general idea of where all teams stand before the super week, check out our LCS Power Rankings. The first game of the day saw GG looking for their first win against a weakened C9 with a couple of visa problems. Academy substitutions of C9 in the bot lane struggled early, giving away the first blood in the fourth minute and without pressure, GG took an early drake. However, C9 couldn’t punish at the top side as GG also took the first Herald and cracked the bot turret for a 13-minute 2k gold lead. We saw our first team fight at the fifteenth minute at the second Herald. The fight was a 2-for-1 for GG and they once again took the objective. C9 struggled with control of the map as they fell back 5k behind in gold, and as a result of this and a bad back timing from k1ng, GG got the first Baron without casualties.

C9 successfully tried to gank the side laner in the bottom lane as they were behind a lot but ended up with them being late to the second Baron. C9 tried to engage in the mid-lane just before the Soul point for GG, but they were behind 7.5k gold at this point so they lost two members to GG’s zero, which was enough for Guardians to end the game. Team Liquid started the game with a lot of proactivity, the minute seven we saw CoreJJ ganking top lane to get first blood, although Dig answered pretty quickly for a 1 for 1 trade. TL was focused on top lane early on as they dived Gamsu once again two minutes later and got an early 700 gold lead, but this meant two early drakes for Dig. A fight started in the bot lane when TL dropped the first Herald which resulted in three kills for TL and the first turret increasing their lead to 4k at the 14th minute. There were a couple of jungle skirmishes going TL’s way, despite Dig getting a kill or two, but it didn’t matter when TL got a 22-minute Baron after a good TP play in the top lane from Bjergsen. The Baron meant TL’s gold lead was now over 10k and using the buff they managed siege and get three inhibitors which led to their second dominant win in two days. Teams had some issues with the draft process, but all champions played in their expected lanes at the end.

The game between two title contenders started out hot, with Abbedagge getting a solo kill after Jojo’s failed dive attempt at minute three. We then saw a big 3v3 in the bot side river and EG got their first kill when Danny rotated early. The game stayed within 500 gold in the first minutes despite a mid-fight and EG’s first Herald and first drake take. EG won a team fight for the second Herald as we got close to the 20th minute and broke mid tower, giving them a 2k gold lead. Despite 100T’s attempt to hunt down players in the side lanes, EG had great control of the enemy's jungle which led them to get a 25-minute uncontested Baron. When EG was pushing the bot lane with the Baron 100T tried to flank by TPing behind, but they couldn’t kill Inspired and lost four players to EG’s zero.

Even when their Baron ended EG continued their siege at the top lane. Just after they surrendered their second inhibitor 100T found a great opportunity to engage and kill Danny. But they were behind 7.5k gold at this point and most of this lead was on Inspired who stayed alive. With his triple kill, EG aced 100T and finished the game. Despite the enchanter lane for the CLG, the bot lane had heavy trading, culminating in a three-minute all-in that went 1-for-1 but the first blood for TSM. Then a minute later supports roamed to the top river for the scuttle and despite Poome being late CLG managed two win the little skirmish and get an early 1k lead. CLG then attempted a dive once again in the top lane, but it ended badly and they gave Huni a shutdown. The first drake was taken very late, 12th minute by CLG and they had a 2k lead. However, they gave up the first Herald before that which TSM used to get mid turret with full plates and they got ahead by 300 gold. Around 15 minutes TSM got the second Herald but they lost the ensuing 4v4 without getting any kills and CLG got back in the lead by 3k.

Around 20 minutes CLG overstepped in the mid lane just a little and TSM took advantage by getting two kills. They wanted to do Baron but after some back and forth teleports, CLG with their enchanters out-sustained TSM and got the Baron plus a 2-for-1 kill trade. The game stalled after the Baron with a steady 4k gold lead for CLG until the 30th minute when CLG got their second Baron and two kills to make the lead 7.5k gold. After the Baron, CLG’s comp was too scaled for TSM to deal with. They engage one last time but they couldn’t get through CLG’s healing and lost the game. 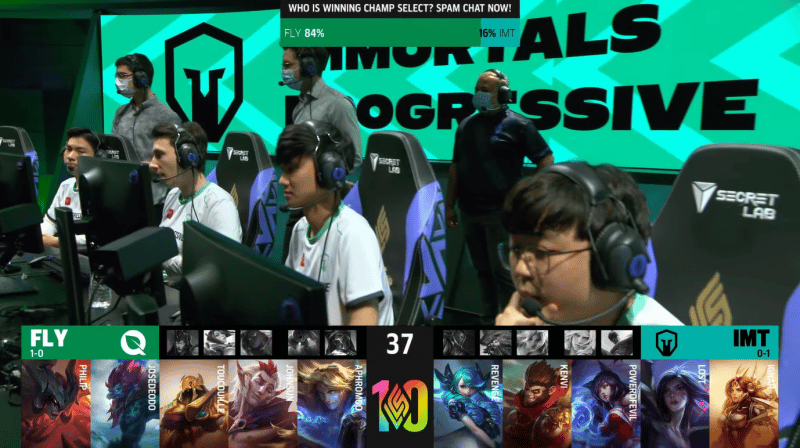 The last game of the day was delayed due to technical issues although there was no change in picks and bans.

We saw some early trading in both bot and top lane but no kills were found, and despite Kenvi having trouble getting scuttle crabs FLY was only behind 100 gold in the first eight minutes. The first Herald was the first team fight but because Johnsun was late to it IMT won the 5v4 and the Herald with Kenvi getting the first blood. The gold was almost even through the first 15 minutes with no turrets dropping. When the timer hit 20, we only saw one more fight that went 1-for-1 and the gold difference was only 50 for IMT and they also had the advantage of two early drakes. The fight for the third drake was huge. IMT got the Hextech Drake, but FLY got a triple kill after a great Aphromoo engage which then led to a Baron. The gold lead was 6k in FLY’s favor after the Baron buff ended at the 26th minute.

At minute 30 FLY started the Baron to bait a fight, and they got the first kill. But a massive TP from Revenge meant IMT got three kills back and they took the Baron themselves. Teams met at the Soul point drake for the IMT with the gold lead halved at 3k. IMT aces FLY without losing a member at the drake and got a 2k gold lead. Which didn’t matter at this point as the ace was enough to push the base and end the game.