The MSI break is over and the LCS Summer Split 2022 is starting with a super week.

With the changes of the Durability Update and the Patch 12.11, it seems like the pro meta will be a lot slower in the Summer. The first day of the super week showed us what can we expect in the coming weeks, with most games having late first bloods and players staying away from skirmishes and tower dives. Still, there were some exciting games played on the Rift. So let’s take a recap of what happened during the day, and if you’d like to read more about how the teams stack up against each other, you can learn more about it in our LCS Power Rankings. Unfortunately for the C9 side, they had to start their first game of the Summer split with their Academy bot lane due to some visa issues. The game itself started out slow, but C9 secured an early Ocean Drake in the sixth minute. Early aggression in the top side paid off and C9 secured the first blood. Despite that kill and a 1k gold lead for C9, EG managed to take the first Herald at minute ten. By minute 17, there still wasn’t much action in the game and the lead was still 1k with C9 taking the second Herald and their second drake, but EG traded these for the first tower. At minute 25 we still had only one kill and both teams were equal in gold and drakes.

But just a minute after there was a disaster in the top lane as Fudge on Fiora teleports in for an ace and a Baron making the gold lead 5k for C9. EG tied the gold, taking the second Baron of the game on the back of some great poke from Jojo’s Corki. EG took the Infernal Soul and their first gold lead in the game. EG finally got their second Baron and managed to close out the game utilizing the immense amount of poke in their comp. In the clash of these two teams looking to get a strong start to the Summer, we didn’t see too much action, except some heavy trading in bot lane. Once again, there was an early Drake take at minute six, this time from FlyQuest. FLY got the first Herald at the ten-minute mark and they had a 1k gold lead, most of it on their bot lane. First blood came in at the minute twelve when Ablazeolive got caught in his own jungle. While we had another slow game with one kill, FLY got to the Mountain Soul point early at the 16th minute with a 1.5k gold lead. At minute 23, teams fought for the Soul point and FLY managed to ace GG and get the Drake after a great engagement from the rookie Philip which also gave them enough pressure to take the first Baron.

GG mostly stayed passive as FLY sieged their base and took two inhibitors, ballooning the gold lead to a massive 9k. Just before their Baron buff ended, FLY engaged near the bot lane inhibitor onto GG, acing them end ending the game with a dominant performance. After having a great start in the Academy League, TSM decided to promote Choi ‘Mia’ Sang-in as their starting support for the opening week matches.

This game started out much faster than the previous two as we saw a 2v2 in mid-lane at the third minute with the first blood and the 2v1 trade going into the TSM’s favor. Spica then kept up his aggressive play with a top lane tower dive, even though it ended in a 1v1 trade of kills. Despite an early 2k gold lead for TSM, 100T got the first Herald. Teams once again traded objectives at minute 15, second Herald for 100T and second drake for TSM, the latter still having a 2.5k gold lead. There was a long two-minute fight at the 20-minute mark where we saw 100T getting an Hextech Drake but conceding the first Baron. But the goal lead stayed at 3.5k as TSM couldn’t extend it.

TSM’s over-aggression just when the second Baron spawned got punished by 100T as they lost 4 members and the Baron. When the buff ended at the 31st minute, 100T had a 3k gold lead and the Soul point. At minute 35, Tactical got caught contesting for the mid-lane push, which led to 100T getting four kills and pushing for a sudden end. 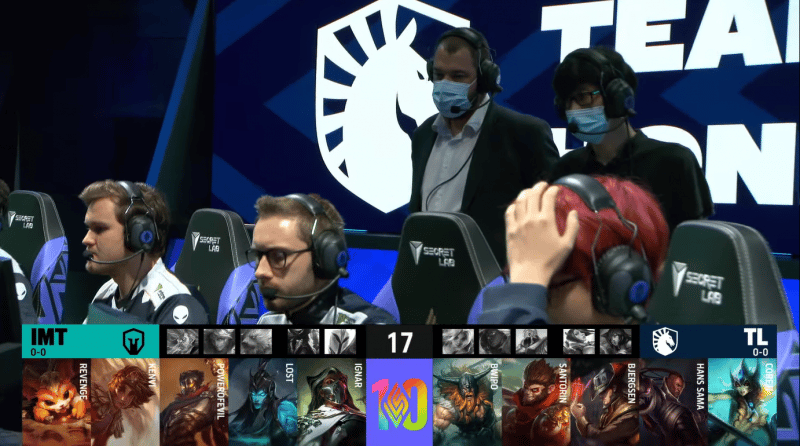 The game started out great for TL as Santorin punished the over-aggressive bot lane of the Immortals with an early gank thanks to his creative pathing. Two minutes after the first blood, TL once again went to bot lane with a Twisted Fate teleport, killing the enemy ADC a second time for a 1.5k gold lead. After a Herald crash and a Bwipo solo kill, TL extended the lead to 3k just when the plates fell off. TL snowballed their lead to 5k after taking the second Herald and getting multiple picks around the map. At the minute 20, every fight had been going in the favor of TL as they got the Baron and Immortals still didn’t have any kills. After the Baron buff ends, the gold lead was at 13k.

TL had the opportunity to go for the Soul point, but they decided to engage onto Immortals in their base at the 25th minute. With this large of a gold and power deficit, Immortals could not hold on. It was a perfect game for TL as they did not concede any kills, towers, drakes, or other objectives. While the last game of the day was expected to be slower due to the draft, we got a 4v4 scuttle crab fight during the third minute of the game. CLG traded three kills for zero, all on Palafox’s Azir, and they cemented a 2k gold lead out of the gate. With the mid prio that resulted from this exchange, CLG got the first Rift Herald, but Dignitas was at least able to get an early Mountain Drake. Despite the early advantage of CLG, the game slowed down considerably. Even with some more traded kills at the top lane gold lead stayed at 2k when plates fell off at minute 14. After a drawn-out team fight, CLG got four kills and a Baron extending the lead to 7k.

There was some downtime between the Baron buff's end and the Soul point spawn. CLG got the Hextech Soul comfortably and then moved for their second Baron of the game and at this point, the lead was 11k. Dig tried to make a last stand after they lost two inhibitors, but they got aced and CLG ended the game which was a comfortable one after they got the early three kills.

For more coverage on LCS or LEC, follow us on ESTNN.