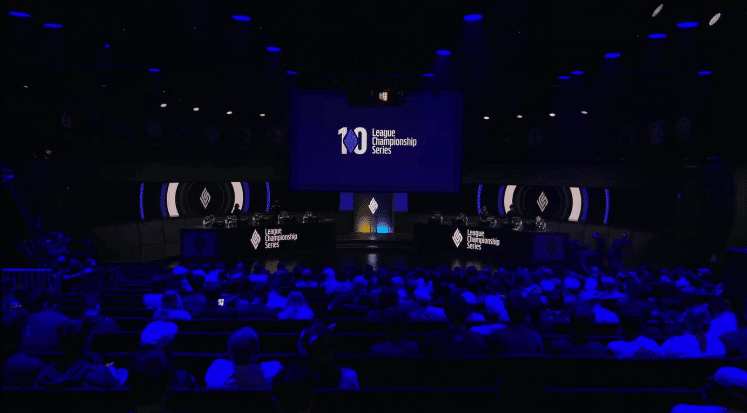 Playoffs are almost here as we have two more days of regular season LCS left.

You can check out more about the teams in the league with our LCS Power Rankings, updated weekly and ahead of Week 8!

As expected CLG was aggressive of the two teams in the early game. An early bot side invade and a mid lane dive gave Contractz two early kills. Still, 100T were able to keep up with them by taking the first Herald and punishing their overstepping across the map. Mid game team fights were on a knife’s edge as teams traded kills between each other. 100T came ahead in most of these skirmishes to put themselves 5k ahead. Eventually, they took the Baron and started sieging. With Luger mispositioning on defense, they found an opening and ended the game.

The Kalista vs Draven matchup in the bot lane promised a bloody game, and that’s what we got in the early game. The game had seven kills in five minutes with ADCs benefitting from this the most. After these early kills the game slowed down a lot, and TL was the team stacking the early drakes. TL also had much better movement around the map which meant they were faster to arrive to side lane fights. With the gold difference growing rapidly, TL got a Baron and the Soul which gave them enough power to finish the game.

Even though TSM was the team that drew the first blood with a top side dive, C9 established a 2.5k early lead after teams started rotating players to fight around objectives. While TSM tried to answer C9’s plays during the mid game, C9 and specifically Berserker’s Draven was too ahead as they got the Ocean Soul point and the Baron after an ace. TSM had a good attempt at turning the momentum around by catching out Berserker, but they could not get past Jensen who was having a dominating game on Anivia. The gold difference was far too gone at this point and TSM couldn’t stop C9 from closing the game out.

Immortals were the team that made the first move with a level two top dive, but a great outplay from Philip and some great pathing from Jose meant Fly answered the aggression very well. FLY continued to make plays around the map, but Immortals were able to answer with some of their own, they also took two early drakes and had the scaling advantage. But the scaling did not matter in the mid game as the top/jungle duo of FLY was miles ahead of their opponents and was able to force plays. The game ended after FLY turned an Immortals engage around with a Pentakill from Johnsun.

The last game of the day was very slow to start. Aside from both junglers invading each other and one or two ganks attempts, we did not see much action. With both teams drafting scaling and prioritizing objectives, there were no kills at 15. Once we got to the mid game, Dig was the side looking to make plays but the superior team fighting from EG was enough to turn these around and then get a Baron. Aside from their team fighting advantage with their 10k+ gold lead, EG also had Impact split pushing on Jax and drawing pressure. Dig couldn’t hold much under these circumstances and EG finished the game after their second Baron.

Notes of the day

A big overall win today for the whole LCS as it was nothing like yesterday and we saw a lot of early action. There seemed to be more willingness by the junglers to dive people in the early levels.

We also saw a lot of good macro and map movements from our winning teams. TL, C9 and FlyQuest were especially good at getting some early lead and then expanding it bit by bit by moving around the map and getting different objectives. While the driving force behind all three teams was their junglers they also had a lot of individual players stepping up.

C9 game had both Berserker and Jensen dominating, the latter did not use the Anivia passive even once. Philip once again had a good showing, even after getting dove level two, in his rookie split. Also, finally we saw a very good carry performance from Hans, which was a rarity in this Split even though he is playing fine overall. Two footnotes that should be mentioned are Solo, despite the loss, and Johnsun who got a Pentakill despite having a rough game.