Learn where to find Crackshot’s Cabin and Sgt. Winter’s Workshop in Chapter 3 Season 1.

Fortnite Winterfest 2021 has officially entered its sixth day of Quests, and we are rolling right along. We’ve recently covered how to complete all challenges thus far, including those involving the Yule log, Snowball Launcher, Toy Biplanes, icy feet and Chickens.  It’s been quite a journey, but there are still nine more that you’ll need to accomplish before January 6.

Today’s Quest requires you to dance for three seconds at two landmarks — Crackshot’s Cabin and Sgt. Winter’s Workshop. Keep reading to find out where you can find these locations to earn yourself another 18K XP. 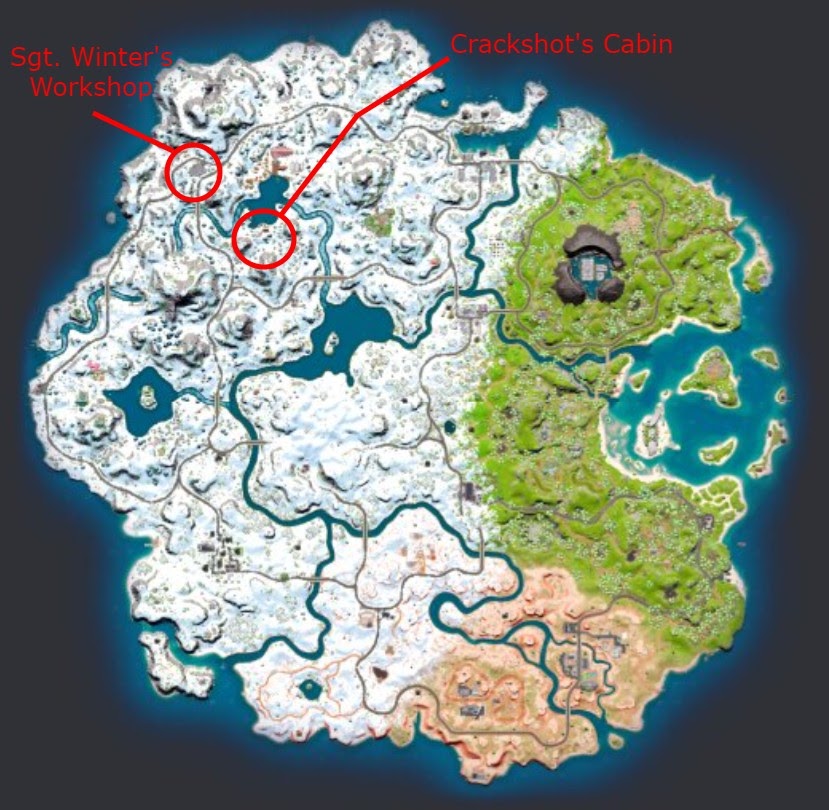 The two landmarks are not far from one another. First, we’ll look at Crackshot’s Cabin. This location sits across the water southwest of Logjam Lumberyard in the snow biome. As you can see on the map above, it’s an isolated landmark. You can expect to see other players here, but you’ll have enough time to dance for three seconds before someone eliminates you.

You can find Sgt. Winter’s Workshop west of Logjam Lumberyard. The same rules apply. Others will land here to either complete the Quest themselves or ruin your attempt to do so. Your best approach is to land and use a dancing Emote immediately before another player can send you back to the lobby.

Here is a quick refresher of where to find these two landmarks:

Competing this Quest might require at least two separate matches, but most should be able to in one game. Either way, dancing for three seconds at two landmarks fits into the easy category.

Be sure to check back with ESTNN for more guides and Fortnite updates!