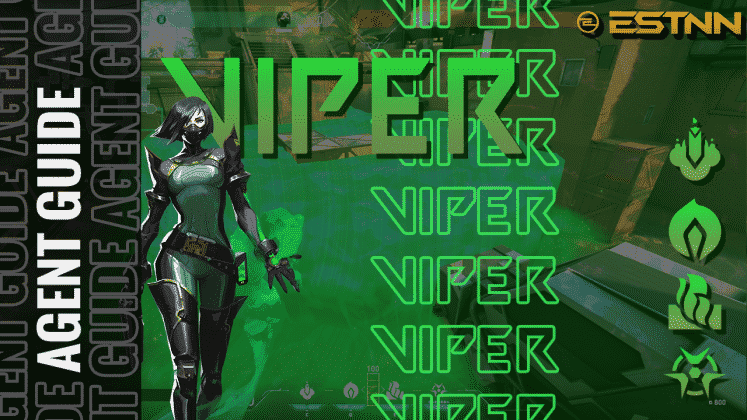 Valorant was announced with only a handful of agents, and Viper arguably kept the subreddit alive for many reasons.

Beyond the waifu fanart of Viper, she is actually one of the least played agents in Valorant. Her toolkit may not always be the most impactful, but this guide will provide the necessary information to choke out the enemy. To start off, one of the less redeeming qualities of Viper is that her toxic smoke abilities damage teammates. Playing in and around smokes is a large part of Valorant’s gameplay, and using Viper instead of Omen or Brimstone limits teammates.

Riot has continued to buff Viper since the closed beta, but make no mistake that a clever Viper is deadlier than an accurate one. Two of Viper’s abilities run on a fuel resource, forcing her to be clever in her ability use. Most agents only get one or two charges for their abilities, whereas Viper can pick up and place Toxic Screen and Poison Cloud as much as she likes. If one of these abilities is active, it will drain the fuel resource until the ability is deactivated, or Viper runs out of fuel. Both of these abilities, and her ultimate, inflict a status effect called Decay. Decay will drain an agent’s health as long as they stand in it until they hit 1 HP. Walking outside of the smoke will allow the agent to quite rapidly begin regaining health.

Viper’s first ability, Toxic Screen, is a passable wall ability that raises toxic gas to block vision. Viper will fire a line of emitters that can go through walls and can be picked up at any time. Toxic Screen can’t be angled or adjusted like Phoenix’s Blaze wall, but it does however do more damage. On top of that, being able to use the ability multiple times in a round is a major bonus. Toxic Screen is used to block enemy sightlines or to cut a team in half.

Poison Cloud is Viper’s second ability that runs off of the fuel resource. Viper throws the emitter, and when activated, Poison Cloud emits a ball of toxic gas. The gas emitted is about the same size as Brimstone and Omen’s smoke abilities, however, Poison Cloud deals damage. This ability is useful in a variety of ways beyond blocking sight and being reusable. The radius of Poison Cloud is unaffected by walls, spreading out equally in circumference regardless of position. The emitter doesn’t stick to objects or walls, which has led to pro players finding discrete ledges or solid objects to place the ability. Unlike the other two controller-type agents, Viper must throw her smoke, opening up room for human error.

Snake Bite, is a pool of acid that weakens any enemy that walks through it. Viper loads the vial into her wrist and launches it where she pleases. The vial breaks into a pool of acid upon impact, covering the area like a Molotov. In addition to doing damage, the acid will also inflict the “Fragile” status effect. The affected agent takes more damage for a short period, making Snake Bite a deterrent. Before this buff, enemy agents would run through the pool of acid, eating the damage and opting for aggression. However, the ability is still lackluster and annoying at best.

Viper’s ultimate ability is Viper’s Pit, a crowd control ability perfect for solo players. Viper spews a humongous cloud of toxic gas applying Decay to any agent inside of it. Any enemy inside of Viper’s Pit is highlighted in red for her to see and the gas lasts for as long as Viper remains in it. There is a short amount of time that Viper can be outside of Viper’s Pit and it will stay active before she must return. The ultimate is an incredible tool at zoning the enemy away from a planted spike. The major issue with the ultimate is that her teammates will take the same damage as enemies.

Viper has the potential to be an incredibly powerful agent. Although I mentioned she can place and pick up her abilities freely, she often struggles to retrieve them. Even if Viper happens to retrieve her emitters, re-placing them would telegraph her position. Activating Poison Cloud and Toxic gas will drain her fuel rapidly and takes 20 seconds for it to completely recharge. The hope is that Decay becomes a bit more aggressive, inflicting more damage, or slowing the recovery rate of health after leaving the ability.

Valorant, as a tactical shooter, feels solid, and a well-designed agent like Viper deserves her spot in the competitive scene. In other Valorant agent guides, I have talked about the unique value that each agent brings. Most players will overlook Viper for now, but with more buffs on the horizon and an intelligent agent design, expect good things.