Learn how to play Crystal Maiden in Dota 2 to be victorious in Diretide matches with the Battle Pass 2022.

Diretide has brought millions of Dota 2 players together in an all-new seasonal game mode. Players can find and attack Greevils on the Diretide map to collect Taffy. You can score the Taffy dropped by Greevils in your enemy wells.

Roshan, the ancient who sleeps at the center of the Diretide map will awaken to destroy the well with the most Taffy scored in it. There are 4 wells provided for each team to defend in Diretide mode. The first team to lose all 4 of their enemy wells will lose the Diretide match. Completing Diretide matches will provide bonus battle points and candies that can be traded for exquisite rewards.

There are several new skins, Personas, and Arcanas that can be unlocked by Battle Pass 2022 holders during the festive season. The Conduit of the Blue Heart Persona for Crystal Maiden, the Voidstorm Asylum Arcana for Razor, and the Claszian Apostasy Arcana for Faceless Void are among the biggest rewards that you can claim.

Take a look at these tactics that you can use to win more Diretide games with Crystal Maiden.

How to Play Crystal Maiden in Diretide 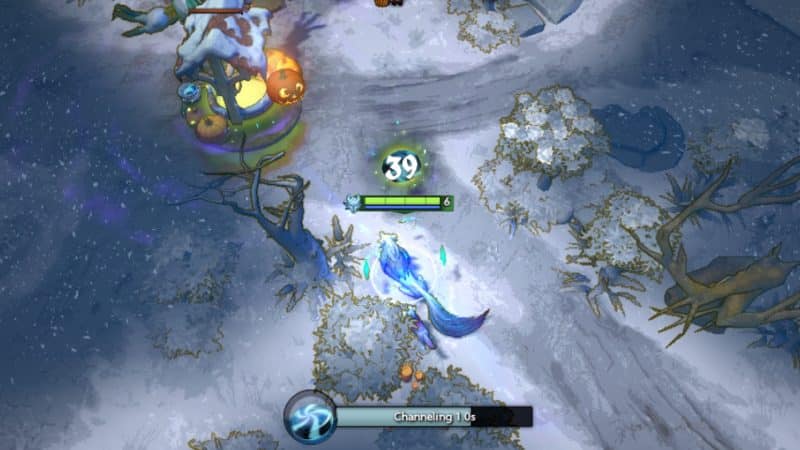 Crystal Maiden is an Intelligence hero who can send shivers down the spine of her enemies. The ranged hero can freeze her enemies in place and deal massive amounts of damage to an area around her to obliterate her opponents in battle.

You can choose Crystal Maiden in Diretide matches to be a solid support hero for your team. She can help the team regenerate mana and disable enemy heroes with her spells to gain an advantage. Crystal Maiden can cast her magical spells to slow enemies and attack Greevils in Diretide mode. Her abilities can be used to defend your wells against enemy heroes by interrupting them while they score Taffy.

Crystal Maiden has a base mana pool of 267. She gains 3.3 Intelligence per level, letting her nuke enemy heroes and Greevils constantly for Taffy and experience. The support hero can cast Crystal Nova to make her enemies crawl.

Crystal Nova can be used to slow the movement speed of her opponents by 50% and decrease their attack speed by 75. The active ability affects all enemy units in a 425 radius, including Taffy Guardians, Greevils, neutral creeps, and enemy heroes in Diretide games. These effects can last for up to 5 seconds and deals up to 260 damage in battle. 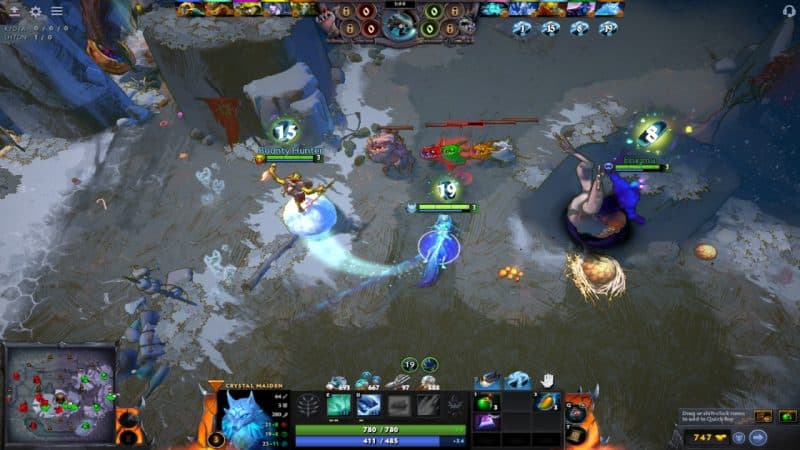 The Intelligence hero can use Crystal Nova against carry heroes to decrease their attack speed, making them less lethal during team fights. Rylai is a great choice to counter carry heroes like Troll Warlord, Legion Commander, and Alchemist, who can mitigate your allies with their melee attacks. Crystal Nova has a cooldown of 8 seconds and consumes 175 mana.

The support hero can hold enemy heroes in place using Frostbite in Diretide matches. Frostbite can deal 100 damage per second (DPS) and freeze enemy heroes to restrict their movement. It lasts for up to 3 seconds and has a cast range of 600.

You can easily interrupt enemy heroes while they try to score Taffy in your wells using Frostbite. Players can also use Frostbite on Taffy Guardians to freeze them while your team destroys them. Frostbite has a cooldown of 6 seconds and requires 155 mana to be used in the game.

Her ulti, Freezing Field, has a large area of effect that can be used to drive enemies back to their base. Enemy units caught inside Freezing Field take up to 250 DPS. Freezing Field has a radius of 810 and lasts for up to 10 seconds. Crystal Maiden’s ulti slows the movement speed of enemy units by 40% and decreases their attack speed by 60.

The ranged hero gains 20 bonus armor while channeling Freezing Field in battle. Her ulti has a cooldown of 100 seconds and consumes 600 mana to be used. You can increase the damage dealt by Freezing Field by 50 at level 20 through the Talent Tree. Players can cast Freezing Field near the wells to defend them against enemy heroes in Diretide mode.

Items to Buy for Crystal Maiden in Diretide 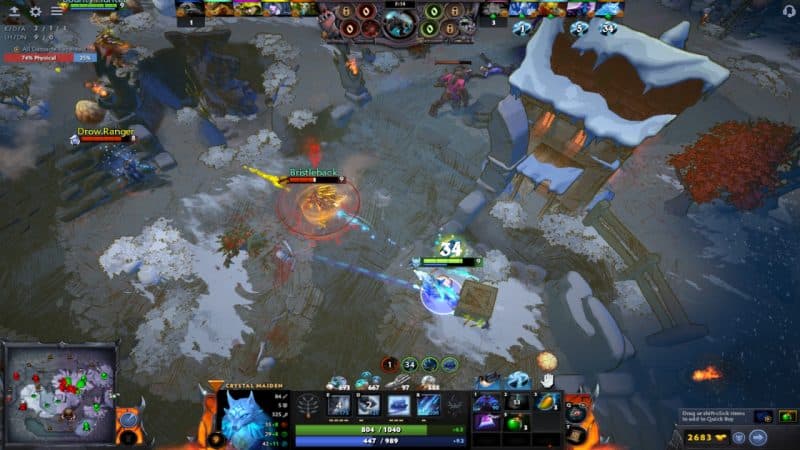 Crystal Maiden can activate Glimmer Cape to escape from enemy heroes. She can also use Glimmer Cape while channeling her ulti, Freezing Field, to stay hidden from the sight of her opponents. Glimmer Cape has a cooldown of 14 seconds and requires 90 mana.

Aether Lens provides 300 mana and 2.5 mana regeneration to Crystal Maiden. The item increases the cast range of her spells and her items by 225. The item costs 2275 gold in the game. You can upgrade Aether Lens to Octarine Core to reduce the cooldown of her abilities and items by 25%.

Casting Freezing Field with Aghanim’s Scepter can help your team kill enemies faster. Crystal Maiden can reserve her ulti to be used near her wells in Diretide mode to freeze enemies and let Taffy Guardians smash opponents while they are disabled by Freezing Field and Frostbite.

Linken’s Sphere can save the life of Crystal Maiden in battles. The item provides 16 Intelligence, 16 Strength, 16 Agility, 7 health regeneration, and 5 mana regeneration to the support hero. She can block most targeted spells once every 14 seconds with Linken’s Sphere in her inventory. 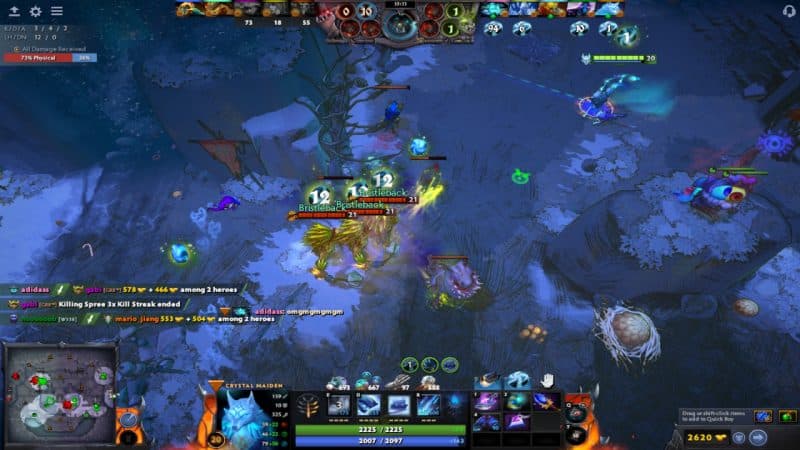 All of Crystal Maiden’s spells have their mana cost reduced by 25% for 6 seconds after using Arcane Blink. It also applies a 20% debuff amplification and 50% cast point reduction on the Crystal Maiden. Arcane Blink has a cooldown of 15 seconds.

Phantom Assassin is an unrelenting carry hero in Dota 2. She can blink in on enemy heroes and slow their movements to quickly deal critical hits with her blade. The melee hero can level up faster during Diretide matches and farm more gold to purchase her core items early in the game.

Crystal Maiden can nuke her opponents with Crystal Nova to reduce their movement speed and attack speed, letting Phantom Assassin close in on her kills. The support hero can use Frostbite to disable enemy heroes, giving Phantom Assassin adequate time to deal the final blow.

Phantom Assassin can use Stifling Dagger on Greevils to collect more Taffy in Diretide mode. Stifling Dagger deals an initial damage of 65 and 70% of her attack damage to enemy units. It has a cooldown of 6 seconds and requires 30 mana.

Allies playing Phantom Assassin can instantly attack enemy heroes by using Phantom Strike. She can blink on opponents affected by Frostbite to slay enemies before they can escape from the battle.

Blur provides up to 50% evasion to the Phantom Assassin, letting her strike enemies without taking significant damage from physical attacks. Her ulti, Coup De Grace, is a passive ability that provides a 15% chance to deal 450% critical damage to her enemies.

Chaos Knight is a durable tank hero in Dota 2. He can stun enemies and deal massive amounts of damage with his physical attacks. Crystal Maiden can help Chaos Knight cast more stuns during Diretide matches by increasing his mana regeneration rate.

The melee hero can use Chaos Bolt to stun enemies slowed by Crystal Maiden. Chaos Knight can use Reality Rift to bring enemies closer after being frozen by Frostbite. Reality Rift can weaken enemy heroes by decreasing their armor by 7. It has a cooldown of 6 seconds and requires 50 mana.

His ulti, Phantasm, can be used to summon multiple illusions to fight enemies in Diretide mode. Chaos Knight can create up to 3 illusions that can annihilate enemies caught in Freezing Field.