Find out how to play Bounty Hunter in Dota 2 to win more Diretide matches with the Battle Pass 2022.

People all over the world are celebrating the holiday season by playing Diretide games in Dota 2. Diretide is the new seasonal game mode that has been released with Part II of the Battle Pass 2022. Players can choose from over a hundred heroes to play with in Diretide mode.

You can attack Greevils on the Diretide map to collect Taffy and score them in enemy wells. Each team can defend 4 wells against enemy heroes and Roshan to win the Diretide match. Roshan will approach the well with the most Taffy scored in it to destroy it, once every few minutes in the game. The first team to get Roshan to destroy all 4 of their enemy wells will be victorious in Diretide mode.

Players can complete Weekly Quests and Cavern Crawl challenges to earn bonus battle points. You can use the battle points received from completing the Weekly Quests and Cavern Crawl challenges to unlock treasure chests with stunning new skins. The Wings of Imperium set for Mars, the Nefarious Fixations set for Lion, and the Tremors of the Tandem Storm set for Disruptor are among the hottest skins available as rewards for leveling up with the Battle Pass 2022.

Here’s an elaborate description of Bounty Hunter, his abilities, and the strategies you can use to win more matches in Diretide mode with the Agility hero.

How to Play Bounty Hunter in Diretide 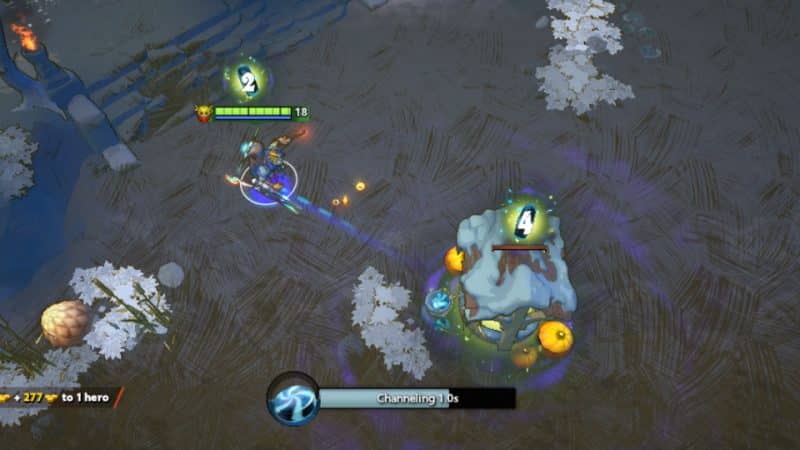 Bounty Hunter is a carry hero who can earn bonus gold for his kills and assists in Dota 2. He can turn invisible and roam the map undetected to find Greevils and enemy heroes in Diretide mode. The Agility hero can steal gold from his enemies with his physical attacks and provide True Sight of his opponents in battle.

The melee hero has an exceptional 8.5 base armor, letting him take reduced damage from all sources of incoming attacks. The increased armor can be used to fight enemy heroes to the death for bonus gold and experience early in the game.

Shuriken Toss has a cooldown of 5 seconds and consumes 80 mana in the game. You can gain an additional charge for Shuriken Toss at level 25 through the Talent Tree. Bounty Hunter has a projectile speed of 900, that can be resourceful while using Shuriken Toss throughout the game in Diretide mode.

Physical attacks gain a bonus attack damage of 180 by leveling up Jinada. Bounty Hunter can steal up to 36 gold from enemy heroes by maxing out Jinada in the game. Jinada can pierce spell immunity and has a low cooldown of 3 seconds. You can increase the bonus damage of Jinada by 40 at level 10.

Enemy units hit by Bounty Hunter while Shadow Walk is active will have their movement speed slowed by 40%. Shadow Walk will also slow the attack speed of enemies by 40 for up to 4 seconds. It has a cooldown of 15 seconds and consumes 65 mana to be used.

The reduced cooldown of Shadow Walk allows him to remain invisible for extended durations during Diretide matches. Bounty Hunter can use Shadow Walk to find Greevils on the Diretide map and signal allies to collect more Taffy that can be scored in enemy wells to win the game in Diretide mode. 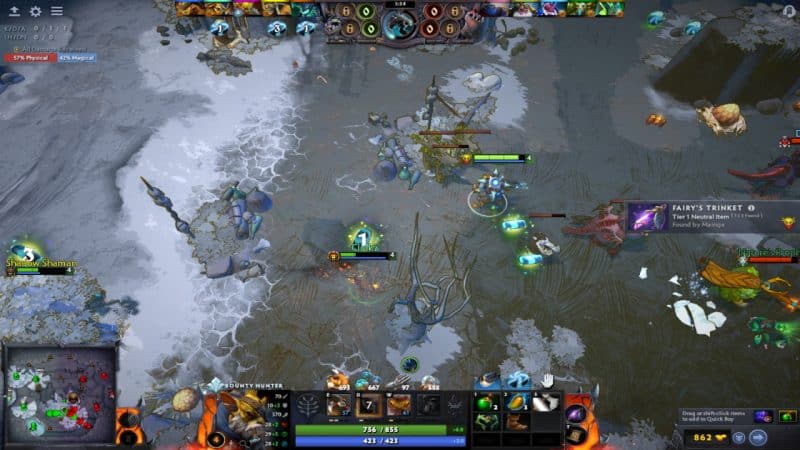 His ulti, Track, can be used on enemy heroes to gain True Sight of opponents. Track also reveals the amount of gold that the enemy heroes are carrying with them. Enemy units who are being tracked take up to 200% critical damage from Bounty Hunter.

Gondar gains 24% bonus movement speed while around tracked units in the game. If an enemy hero dies while being tracked, it will provide 320 bonus gold to the Bounty Hunter and 120 gold to his allies. Track lasts for up to 30 seconds and has a cast range of 1000. It has a cooldown of 4 seconds and requires 60 mana in the game.

Items to Buy for Bounty Hunter in Diretide 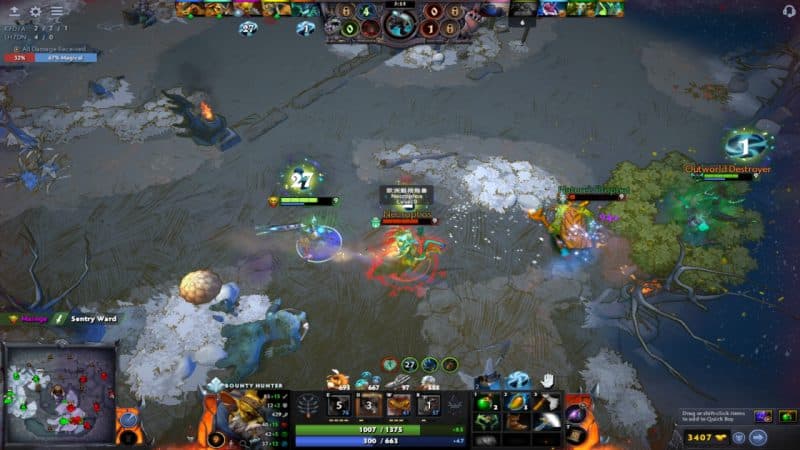 The melee hero can slow the movement speed of enemy units by 100% for 0.8 seconds by equipping Echo Sabre in his inventory. Echo Sabre has a cooldown of 6 seconds. You can use Shuriken Toss after hitting enemies with Echo Sabre to stun them, stopping them from scoring Taffy in your wells.

Battle Fury can be bought for 4100 gold in the game. It grants 60 attack damage, 7.5 health regeneration, and 2.75 mana regeneration to the Bounty Hunter. Gondar gains the passive ability, Cleave, by purchasing Battle Fury.

Cleave lets hits from Bounty Hunter deal a portion of the attack damage to enemy units in front of him in a radius of 650. Battle Fury can turn Bounty Hunter into a farming fanatic, letting him kill more neutral creeps and Greevils in Diretide mode.

Daedalus grants 88 attack damage to Bounty Hunter. His attacks have a 30% chance to deal 225% critical damage per hit. The item can be bought for 5150 gold in the game. You can use the bonus attack damage from Jinada to deal devastating amounts of damage to enemy units after using Track on them in Diretide mode.

Abyssal Blade provides 250 health, 25 attack damage, 10 Strength, and 10 health regeneration to the Agility hero. Bounty Hunter has a 60% chance to block 70 damage by equipping Abyssal Blade. The item lets the melee hero gain a 25% chance to bash heroes. Enemy units bashed by Bounty Hunter will be stunned for 1.5 seconds and take 120 bonus damage.

Axe can be an amazing ally for Bounty Hunter in Diretide mode. The Strength hero can force his enemies to attack him while Bounty Hunter uses his skills to kill his opponents. Axe can tank incoming attacks and spells from enemies and provide his team with perks that can help his allies move closer to weakened heroes.

Bounty Hunter can cast Track to provide vision of enemy heroes. You can signal Axe for a team fight once an enemy hero has been spotted and tracked. Axe can blink into position by using Blink Dagger and use Berserker’s Call to distract enemy heroes.

Allies can use Battle Hunger while playing Axe to reduce the movement speed of enemies by 35%. Battle Hunger deals 25 damage per second (DPS) for up to 12 seconds or till the enemy lands a last hit. It has a low cooldown of 5 seconds and consumes 80 mana, letting allies nuke enemy heroes with Battle Hunger in Diretide games.

Axe can return damage to Greevils, Taffy Guardians, and enemy heroes by leveling up Counter Helix. Enemy attacks have a 20% chance to deal 180 Pure damage to all enemy units in a 275 radius. Bounty Hunter can track enemies while they are attacking Axe to gain bonus gold for assists from easy kills.

Mars is a Strength hero who can restrict the movement of his enemies using his skills. Bounty Hunter can coordinate team fights with Mars to surprise enemy heroes in Diretide mode. Mars can trap enemy heroes with his ulti to prevent them from scoring Taffy.