We catch you up with everything that dropped in Overwatch 2's second season trailer.

Following their promise of making each season of Overwatch feel distinct, Blizzard's team-based shooter doubles down on the mythic theme by introducing an impressive set of Greek myth-inspired skins. But that's not all we have to look forward to.

The premium battlepass will get a godly update with 3 unlockable skins. Legendary "Poseidon Ramattra" and Legendary "Hades Pharah" will be available once Season 2 starts, with Mythic "Zeus Junkerqueen" being at the very summit of the BP.

Additionally, they announced a limited-time game mode centered around the new pantheon skins. The "Battle for Olympus" event starts on Jan 5 and ends on Jan 19, 2023. What little glimpses we got of the game mode in Overwatch 2's trailer saw Junkerqueen's Zeus rain down lightning with her "Commanding Shout" ability. With what was shown, it's safe to say that god-like powers will be given to each Greek myth-inspired skin. 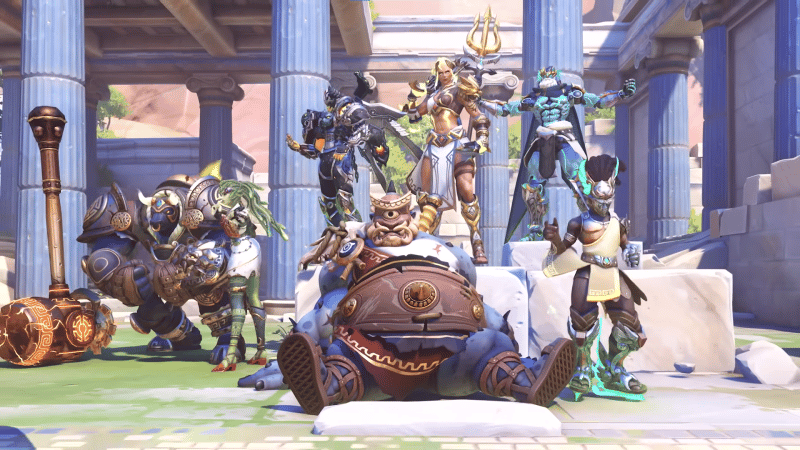 Among the skins that were revealed was Minotaur armor for Reinhardt, a Medusa skin for Widowmaker, a Cyclops outfit for Roadhog, and a Hermes outfit for Lucio. Quite fitting.

Old and new holiday skins will also make a comeback throughout the second season. Here are the events slated for Season 2:

Both events will reward you with skins for simply playing the game, much like it has in previous occasions. These skins were shown in the trailer and include "Epic Ice Queen Brigitte", Legendary "Winged Victory Mercy", and Legendary "Kkachi Echo."

We got to see more of the new Shambali monastery Escort map. Season 2's new battleground — while sharing architectural motifs with Overwatch 2's Nepal map — will likely hold its own references to a certain hero's past. Given that Ramattra used to believe in Zenyatta's ethos, "Shambali" might give us more insight on the once-peaceful Omnic's journey.

We also hear more voicelines from Null Sector's menacing leader in the Season 2 trailer. Ramattra is Overwatch's first "tempo tank", a specialized hero that lets you change his abilities and playstyle on the fly. He uses a swarm of nanobots that augments his robotic form and devastate singe targets from afar. Knowing Ramattra's revolutionary motivations, his in-game role reflects his character's purpose: to protect his endangered kind from extinction at any cost.

With a new season comes new environments for play. Rialto and Blizzard World will be coming back to regular rotation, with a possible weather change hinted for the latter. Times of day will be changed for Oasis and Nepal, while Hollywood and Watchpoint: Gibraltar get pushed out of rotation. "As a reminder, all off-rotation maps will continue to be available in custom games.", Blizzard clarified.

On Blizzard's Overwatch blogpost at this time of writing, they announced the names of the heroes who will get adjustments for Season 2.

Seeing inconsistencies with Sojourn's win-rate at higher tiers among similarly-skilled players, we've finally got confirmation of a future nerf to her Railgun's range. Blizzard hopes that this change — while a bit overdue — will offset her lethality and encourage players to get into closer firefights with her Power Slide's mobility.

Significant buffs were also promised for Doomfist to let him "better support his role as the team’s front line, while still maintaining the playstyle core to his Hero identity". It seems that Talon's de facto leader will finally get a much-needed tune-up, but only time will tell if they will be good enough for Tank mains to start picking him up again.

Ana, Bastion, Junker Queen, Kiriko, Mercy, and Symmetra will all receive their own changes once Overwatch 2's new season arrives on December 6.

New Overwatch 2 players will be able to choose which hero they'd like to focus on unlocking by selecting their Catch Up challenge. These players will be taken to the Practice Range to learn their abilities before getting into actual matches to earn the hero. This comes as an easy alternative to just straight-up buying the hero in-game.

In their recent blog post, the devs reminded players that "Overwatch 1 owners automatically receive new heroes Sojourn, Junker Queen, and Kiriko, by logging in before the end of Season 2." Blizzard further clarified by stating that "Players new to Overwatch 2 received Sojourn and Junker Queen as a Season 1 login bonus."

Stream watchers will be able to catch a few goodies when they tune in to their favorite Overwatch 2 streamers. An unnamed Legendary Ramattra skin was also confirmed, with many more prizes were hinted.

For more news on all things esports, follow ESTNN.