They may have traded Majors with Cloud9 and Sentinels all season, but the Green Wall stood tall against all other forces to take home the HCS World Championship. 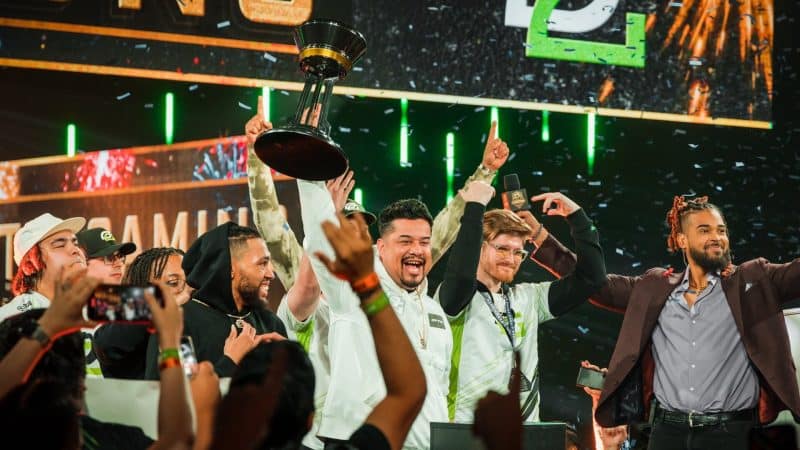 Some said they wanted it to happen. Others said they knew it would. In the end, many found happiness and satisfaction in the result of OpTic Gaming taking down season long titans Cloud9 in the Grand Finals of the 2022 HCS World Championship. What else can you really expect from a team composed of the biggest name in FPS esports, the 2022 HCS MVP, the fan favorite player of the league, and the new kid on the block? It was the story every HCS fan could've hoped for, and the ending those four guys and their legendary coach dreamed of. Taking home the gold (literally in the form of gold OpTic chains from Hector "H3CZ" Rodriguez) for the second time in OpTic history was a long road, but each player had a notable impact in that journey

Back to the 2021 Kickoff Major. Cloud9 stands as the team to beat for weeks on end, and it all comes to a head in the first HCS Major in four years, where that dominant team would defeat a stacked EUnited roster to lift the first trophy in almost half a decade. Where were OpTic Gaming in the scenario? Well, Bradley "aPG" Laws, Tommy "Lucid" Williams, Joey "TriPPeY" Taylor, and Justin "iGotUrPistola" Desse had been eliminated in the lower bracket, placing no higher than in the Loser's Quarterfinals. What people failed to remember is that OpTic Gaming had defeated two of the top four teams in the tournament, and almost defeated the Champions-to-be in that run, losing 2-3 against Cloud9 dropping them into the Loser's Bracket.

Then came the 2022 North American Regionals. A tournament in which only sixteen teams would compete, earning their way through points in the Pro Series and Majors. Now, what they were fighting for was much bigger. The top eight placing teams would qualify straight into Pool Play at the Kansas City Major, the first Global Finals of the two splits that make up the season. Its the final chance to punch an early ticket towards the World Championship, and OpTic Gaming come to play. They don't run into a Winner's Bracket loss until they meet Cloud9 in the Winner's Finals. Then, beating EUnited handedly in Loser's Finals, they meet Cloud9 in Grand Finals, their first in a very long time. Now isn't quite their time though. Cloud9 would stand on top yet again, claiming the first place spot as their own, leaving OpTic still in the best position since the return of the HCS. Little did they know this would be the last time they would play on the main stage with seven time Major Champion Justin "iGotUrPistola" Desse.

Desse would part ways with the team in August of 2022, after being replaced by former Call of Duty World Champion Matthew "FormaL" Piper months prior, marking the end of the beginning for HCS 2022 OpTic, and the beginning of something anew.

Kansas City Major. The first place team will take 100,000 points to their name and practically guarantee themselves a spot in the World Championship. Sadly, it would still not be OpTic's time, despite their previous showing. Sentinels, a roster that just five years ago played under the name "OpTic Gaming" would finally pull themselves from top four, to a Major Championship, leaving OpTic with a third place finish, and still a great chance at the World Championship. Still though, the Green Wall wanted more.

North America Super. The second split equivalent of the North America Regionals. A top eight placement means qualification for Pool Play in the Orlando Major, a last chance to collect serious points toward qualifying for the World Championship. This time OpTic wouldn't be faltered. Through Pool Play, and an almost flawless Winner's Bracket run, they would only drop a single map in the entire Super, easily taking home a first place. FormaL had meshed, and other teams could see it, as well as the fans. The season was already over OpTic wasn't going to hit the breaks ever again.

Orlando Major. This is where the questions ceased. "Will FormaL be able to hang with the top teams?" "Can OpTic hold a top four position?" Nobody was asking after the Green Wall made yet another Upper Bracket run into their first Major win. Sentinals, EUnited, and Cloud9 were all staples as the names that would follow "OpTic Gaming" in the tournament summaries. There was a new favorite to win the World Championship, and not a stage too late.

Pool Play was a walk in the park for the Green Wall. Dropping only a single map to Native Gaming Red in the entirety of Pools, OpTic set themselves for yet another impressive bracket run in a Championship Tournament. A 3-0 victory against Gamers First. Followed by a 3-0 Victory against the legendary members of Sentinels. Followed by yet another 3-0 victory this time against Native Gaming Red, who proved themselves to be a greater team than anybody was willing to bet coming into the Championship. They wouldn't see Native in grand finals though. No, Cloud9 had defeated the team that put them in the Lower Bracket to begin with.

It was a match of momentum. Cloud9's bracket reset was about their back to back map wins with carried momentum from game to game, almost dominating OpTic Gaming in the first series. The boys in green would then show one of the greatest resurrections in esports tournament history. The second series would be a 4-0 sweep, with OpTic showing an even more fierce dominance than Cloud9 had showed in the first series. They had done it again, but this time for the big one. With an almost perfect three months of competition, nobody earned the World Championship like OpTic, and that's why they were the ones with the trophy held high when HCS 2022 came to a close.