Ninja Battles returned after going on hiatus for over a month. The break took place due to Ninja's departure from Microsoft's Mixer platform. He eventually signed an exclusive deal to make his triumphant Twitch comeback. As a result, the Ninja Battles tournament series's remaining weeks will stream live on the Twitch platform.

To provide a quick refresher, TSM ZexRow, TSM MackWood and BBG Calc won the inaugural tournament back in May. TSM Commandment, TSM EmadGG and FaZe Bizzle followed with a win in June. Week three of Ninja Battles took place in Chapter 2 – Season 3, which saw BBG Bucke, BBG Kreo and TSM Khanada come out on top.

Fortnite's competitive landscape is much different from the first three weeks of Ninja Battles. Players are now deeply entrenched in an all-new Marvel Comics-themed season. It's arguably one of the most balanced seasons to date, especially with the recent removal of Boogie Bombs from the loot pool. With Ballatw and MonsterDFace calling the action alongside Ninja, let's see how the leaderboard played out in week four of Ninja Battles. After five intense matches featuring some extremely talented trios, NA West phenom 100T Arkhram joined NA East players C9 Avery and Skqttles in a winning effort. This multi-regional trio trailed NA East monsters TSM Commandment, Liquid Cented and NRG Edgey heading into the final match. However, a 20 point performance in game five secured Arkhram, Avery and Skqttles the tournament victory. Despite Arkhram having to wrestle with upwards of 100 ping throughout the entire tournament – he, Avery and Skqttles took the number one spot and $25K USD.

The Rest of the Leaderboard 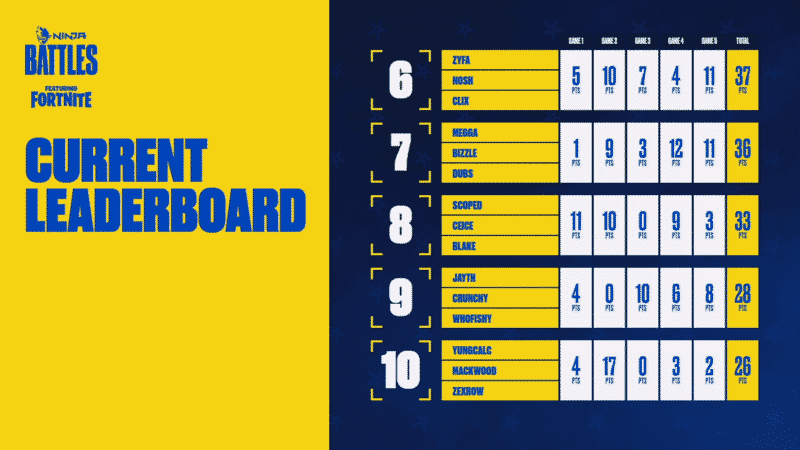 BBG Bucke and BBG Kreo substituted Liquid STRETCH in for TSM Khanada, which worked well for them. Although they earned zero points in match two – Bucke, Kreo and STRETCH rallied off games worth 21, 13 and 17 points to close out the tournament. That home stretch included two Victory Royales in matches three and five. Their performance yielded $10K USD for third place.

Eclipsae, illest and Furious took fourth place with 52 points. Reverse2k, Deyy and Mero rounded out the top-five with 47 points. Refer below for the top-ten finishers in week four of Ninja Battles.

Congrats to @skqttlescuh @Arkhram1x and @Avery_FN on the 1st place finish in #Ninjabattles and thank you everyone for participating! Incredible matches, pumped for week 5

After nearly two full seasons of solos, pro players are ready for trios to take shape in Chapter 2 – Season 4. This season's meta is outstanding compared to what we have seen in the past. Pump Shotguns are back, and Boogie Bombs are no longer in the loot pool.

The Ninja Battles tournament series offers a more casual tournament atmosphere. It's a viewer's delight to see a mixture of pros and content creators putting on a show for fans. Let's hope Ninja continues to host these tournaments as an alternative to Cash Cups and DreamHack. Stay tuned for more information on Ninja Battles week five real soon.