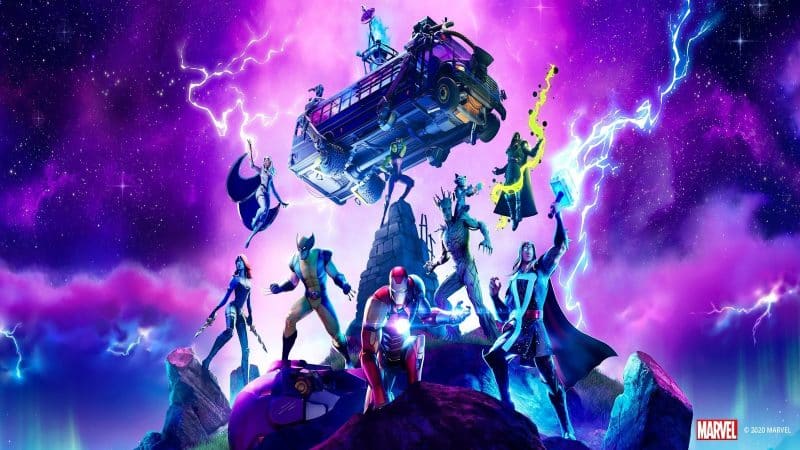 Fortnite: Battle Royale has officially partnered up with Marvel for its newest season. The teasers and leaks have all rang true as of 2 AM eastern this morning. Some of Marvel Comics’ most prominent characters have made their way into Fortnite. Some of those characters include Iron Man, She-Hulk, Wolverine, Thor, Doctor Doom, Storm and Groot.

With every new season comes a slew of changes to weapons, items, locations and game mechanics. ESTNN has you covered with all of that information for Fortnite Season 4: Nexus War.

As usual, Epic Games made significant adjustments to the loot pool in this new season. Some weapons went into the vault, whereas others left the vault after a long time laying dormant. Let’s first take a look at weapons that are no longer available in Season 4 courtesy of VastBlastt on Twitter:

It’s strange to see Epic remove some cornerstones from Fortnite like the Tactical Shotgun and the SMG. Vaulting the strongest pistol variations is also an odd decision as well, which makes the weapon closer to useless. The Flare Gun introduced in Chapter 2 - Season 3 is also a thing of the past.

As for items, removing the Stink Bombs and Decoy was the right move. However, the lack of Launch Pads now brings mobility issues back into question. Overall, these are some significant changes that will dictate how players have to adjust. Let’s take a look at items that left the vault for Season 4.

Fortnite players the world over can rejoice, knowing that the Pump Shotgun is back in the loot pool this season. Players can now sidegrade a Charge Shotgun to a Pump and vice versa on the upgrade stations. Some other notable readditions are the Combat Shotgun, Scoped Assault Rifle, Light Machine Gun, Bouncer and Boogie Bombs.

Some of these weapons and items have not resurfaced in Fortnite since Season X. This is quite the development and a welcome sight for those who took issue with last season's weapon layout.  The Charge Shotgun, Crash Pads, Firefly Jars, Bolt Action Sniper, Burst Assault Rifle and Assault Rifle all remain in Fortnite this season. The Midas Flopper teased last season is also reportedly available in Fortnite. When consumed, it turns a player’s entire inventory into Legendary rarities. A new Fire Trap is now available in-game as well. When deployed, it launches fireballs at enemies nearby.

This trap is enabled, and obtainable in-game. This is also the only new 'weapon' that is currently available. pic.twitter.com/ZvmXWeFOMF

Stark Industries has also developed some new additions to Fortnite. The Stark Industries Supply Drone will drop loot similar to drones back in Season X. The Energy Rifle is a “distinct new weapon with a different benefit depending on how you aim,” according to Fortnite’s description.

Epic has added a slew of new fish to play around with. Each of the new fish offers different abilities. One of which is a Thermal Fish that grants a player thermal vision. The Spicy Fish acts similarly to a consumable pepper, granting players elevated speeds.

Fortnite Season 4’s map remains mostly the same with a few exceptions. Two new Marvel POIs exist on the map now. Those are Doom’s Domain and Sentinel Graveyard. Of the two locations, the only one named on the map is Doom’s Domain, which replaced Pleasant Park. The Avengers Helicarrier is also the new pre-game lobby.

The Flopper, Combat Shotgun and Assault Rifles have all received a nerf in some regard this season. Floppers now heal 40 HP down from 50 HP. The Combat Shotgun now deals 55 damage instead of 80, has a 1.7 fire rate down from 1.85 and each clip maxes out at eight shots instead of ten.

Marvel has taken over the Battle Pass in Fortnite Season 4. Unlockable character skins include; She-Hulk, Storm, Dr. Doom, Iron Man, Wolverine, Thor, Mystique and Groot. Each character has several variations, some of which include their alter egos.

Players lucky enough to earn a Victory Royale this season will acquire the Mighty Marvel ‘Brella.

There is a slew of new cosmetics that will be available throughout this season. Some of these include the viral “Say So” TikTok dance as well as some Fortnite: Save The World skins.

Once unlocking the Tony Stark and Iron Man skin, players can switch between the two in-game using the built-in emote.

When you unlock Tony Starks Iron Man Suit you can use the built in emote to swap between the suit and being normal Tony Stark mid-match. pic.twitter.com/buPuYIYqNY

The Mystique skin offers a similar trait, where she can mimic a player’s skin that she eliminates for a short period of time.

Mystique's built-in emote lets you disguise as any skin you eliminate for a while! pic.twitter.com/UYeO1To6TX

The chests spawn rate has been reduced:

One of the more unfortunate adjustments in Fortnite Season 4 presents itself in the form of random chest spawns. This feature left Fortnite in Chapter 2 - Season 1, but players are reporting that chests no longer spawn 100% of the time. Unfortunately, this will breed more randomness, especially in fights off the spawn.

There’s a whole lot to digest with this new season. We’ve only scratched the surface on what Epic has changed. Check back here for more updates as the community discovers other changes in this Marvel-themed season of Fortnite!