Competitive Fortnite players across all seven regions have been working hard over the past two seasons in preparation for this event. The fan-favorite and player beloved trios format returned as the focal point for the first time since Season X. A lot has changed since then, and Fortnite is much different. Chapter 2 - Season 4 saw Marvel Comics superheroes invade Fortnite's map with a slew of new weapons, Mythic abilities and some unique points of interest (POIs). Two of those recently added locations - Stark Industries and Doom's Domain - have become the two most potent this season due to the amount of loot available within each. It's merely one of many active storylines unfolding in FNCS.

Week one produced the first round of qualifiers in each region. It's worth noting that the top 8 trios from the Middle East, Oceania and Asia regions at the end of Grand Finals will advance themselves to stage two - also known as heats. For the more populated areas - NA East, NA West, Brazil and Europe - the top 15 trios will achieve the same. An unfathomable five of seven regions saw repeat winners from week one. Thanks to Kinch Analytics, we have a complete cumulative leaderboard per region from the second qualifier. After multiple days of heated competition, let's see which teams will be moving to the next round to compete for more of the $5 million prize pool. 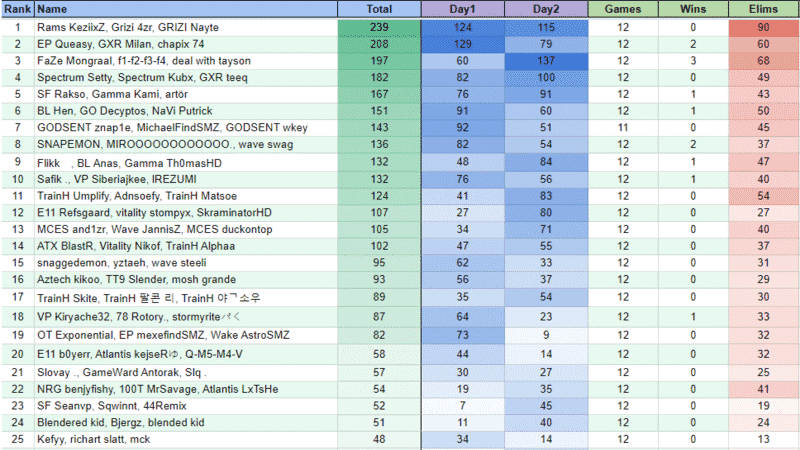 Just like last weekend, Rams KeziixZ, Grizi 4zr and Grizi Nayte triumphed in the most difficult Fortnite competitive region by a sizable margin. Their two-day Grand Finals point production improved from 182 in week one to an astounding 239 in week two. Despite not achieving a single Victory Royale, these three players managed 90 eliminations — more than any other trio. Domination is an understatement as Keziix, 4zr and Nayte continue to win without much resistance.

EP Queasy, GXR Milan and chapix 74 finished week two in second place after failing to qualify in week one. Their two-day performance yielded 208 points overall with 60 eliminations. FaZe Mongraal, Liquid mitr0 and TaySon stormed back on day two with 137 points and three Victory Royales after earning just 60 points in the first session; they moved from 12th place to 3rd place in only six matches. Two-time DreamHack winner GXR teeq, Spectrum Kubx and Spectrum Setty rounded out the top four with 182 points.

Also Read: SypherPK Gives His Take on Competitive Fortnite, States Any Can be a Pro 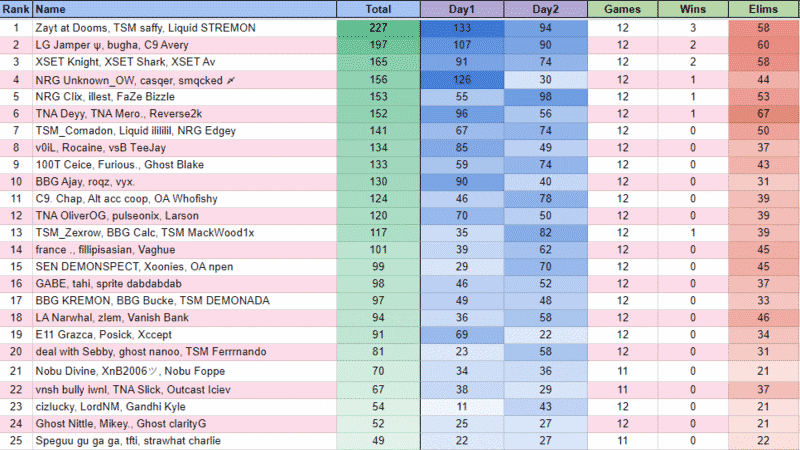 With no competition in sight and no Mystical Bomb at Fortnite's strongest POI - Doom's Domain - NRG Zayt, TSM Saf and Liquid Stretch achieved their first qualifier victory. These three came out of the gate firing on day one with 133 points and two Victory Royales. They added 94 points on day two with an additional Victory Royale. The strength of Doom's Domain has taken shape in NA East. Only time will tell if Zayt, Saf and Stretch can sustain this through heats and in Chapter 2 - Season 4 Finals. 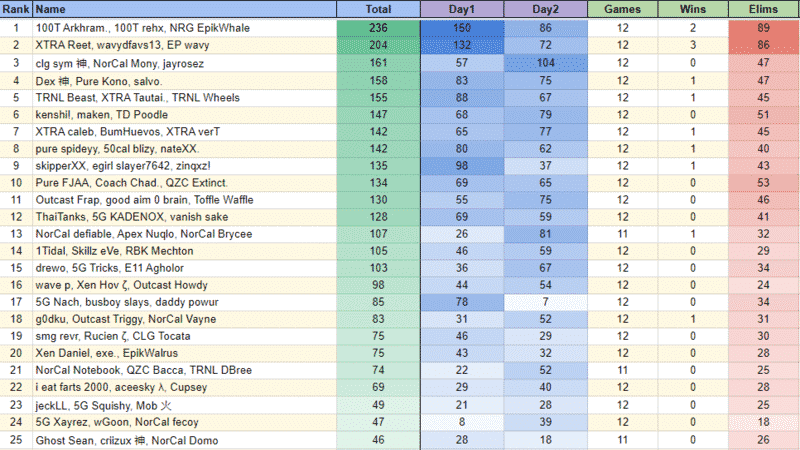 The NA West Grand Finals played out similar to last week, with 100 Thieves players Arkhram and rehx triumphing alongside NRG EpikWhale. This time around, arguably, NA West’s best trio accumulated 236 points across the final 12 matches with 89 eliminations and two Victory Royales. It’s safe to say Arkhram, rehx and EpikWhale have a solid hold on their home region. They will look to make it three victories in three weeks as the competition continues.

Last weekend’s second-place finishers — XTRA Reet, favs and EP wavy — managed another runner-up result. Along with Akrhram’s team, Reet and company were the only two NA West teams to surpass 200 points. Additionally, they were the only other trio to earn over 80 eliminations. The final qualifier will be fun to watch as these two teams fight back-and-forth for the NA West title. CLG Symetrical, NorCal Money and jayrosez achieved a top-three finish with 161 points.

SA - k1ng, Seeyun and Rustyk = Most Dominant Trio in the World 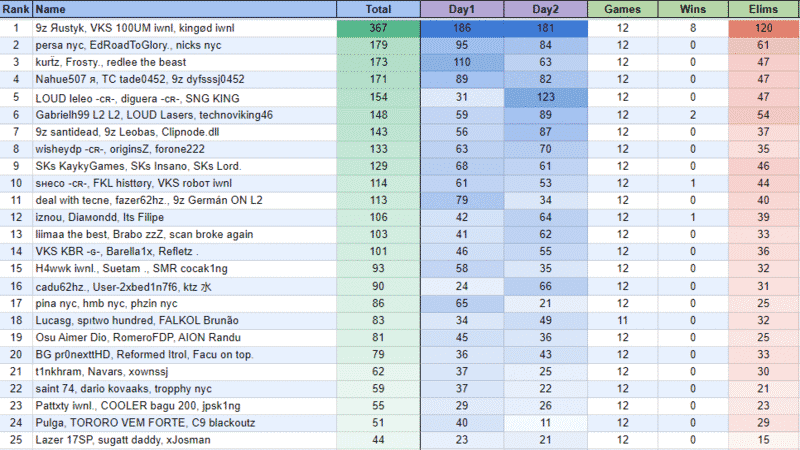 It was a new weekend with the same results for the South American Fortnite region. 9z Rustyk, Seeyun and k1ng continued to make the rest of their opponents look clueless with back-to-back 180-plus point efforts. Across the 12 matches in the Grand Finals, Rustyk, Seeyun and k1ng managed eight Victory Royales, 120 eliminations and 367 points. Fortnite fans are watching history unfold as this trio managed 19 wins in 24 matches across the week one and week two finals. At this point, all other trios are vying for second place behind the South American kings.

OCE - X2 Twins and Volx Pull Away on Day Two 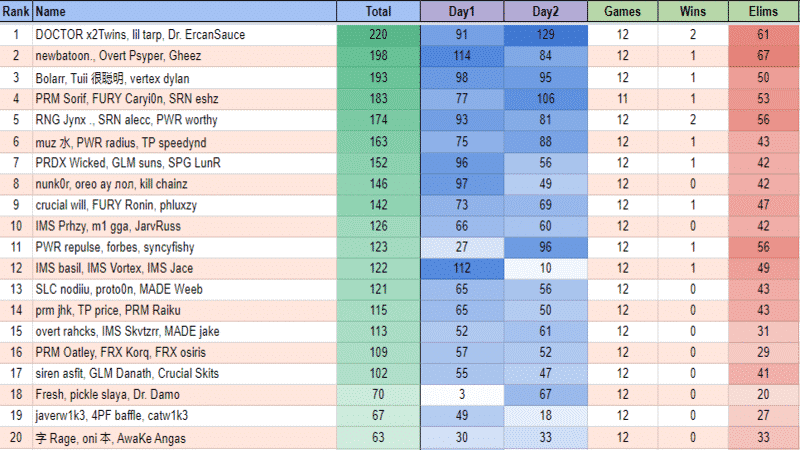 The X2Twins — Jordan and Jesse — along with Volx are Oceania's week two FNCS winners. These three finished in third last weekend and unquestionably improved since then. They ended day one in 7th place with no Victory Royales. Day two proved much different; Jesse, Jordan and Volx won two of six matches and 34 eliminations. Week one winners, alecc, worthy and Jynx, took 5th place after missing a game. OCE Grand Finals will be a sight to see. 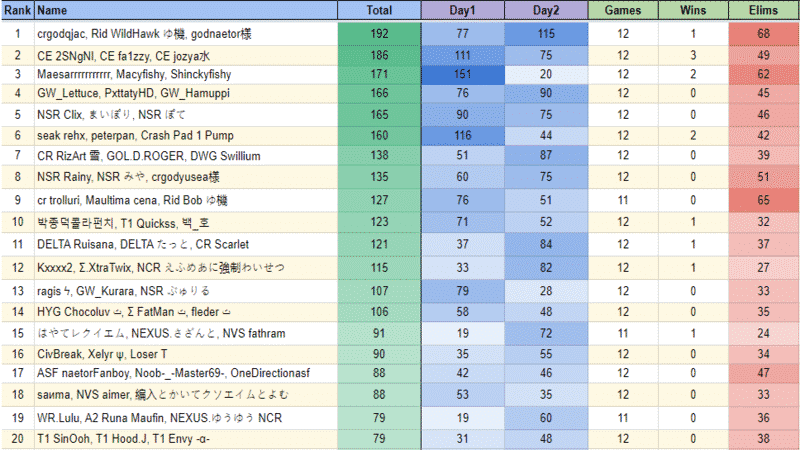 ME - KuKi, Mev and Nyle Dominate for the Second Straight Week 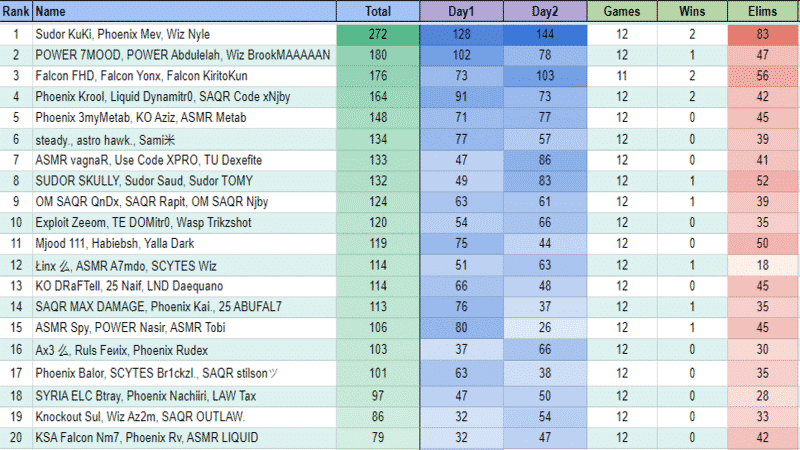 Like their Asian counterparts, KuKi Mev and Nyle went back-to-back, winning week two of the Middle East FNCS Qualifiers. These three players dominated once again, with a massive 272 points across the final 12 matches. That insane performance included 83 eliminations and two Victory Royales. It's safe to say that KuKi, Mev and Nyle own the Middle East region.

One qualifier remains in this $5 million FNCS competition. Check back here next weekend to find out which teams will move on to heats!