A Fortnite veteran gave his take on competitive Fortnite after competing in FNCS week two.

Many seasoned Fortnite: Battle Royale loyalists will recognize the name SypherPK for his contributions to the community. When the Epic Games-developed title took off in 2017, SypherPK — whose real name is Ali Hassan — exploded into a social media superstar. He has amassed nearly 5 million YouTube subscribers and over 1 million Twitter followers. Thanks to Fortnite, SypherPK was able to make content creation his full-time gig.

Apart from his successful career as a Twitch streamer and YouTuber, Sypher spent some time competing in Fortnite tournaments. He placed well back in the Summer Skirmish days, notably with Twitch star and former Fortnite player Nick “NICKMERCS” Kolcheff. SypherPK also nearly qualified for the Fortnite World Cup with Marcus “Ranger” Periera, which is certainly an accomplishment for someone who did not grind as much as the top players.

Sypher has experienced Fortnite at every possible level. He mostly focuses on content creation nowadays but took part in yesterday’s Fortnite Champion Series (FNCS) week two open qualifier. After failing to reach the semi-finals, SypherPK granted his viewers some insight into competitive Fortnite from his point of view.

After not playing any significant tournaments since Chapter 2 - Season 2, SypherPK reflected upon his performance after receiving a donation, mocking his performance. “I’m not a competitive player. I don’t play, I don’t scrim, I don’t play arena,” stated the 24-year-old Twitch streamer. “It’s not far fetched for someone who doesn’t touch competitive. To be fair, opens are a little cheesier. I’ve seen some pro players fail to qualify in opens. It is what it is.”

The broken aspect in competitive fortnite

The professional scene has a long-standing love-hate relationship with competitive Fortnite. It brings them a lot of money, but developer decisions and the game’s inherent randomness make for somewhat of an unpleasant experience. SypherPK continued, “There’s so many things out of your control. There’s so many broken things or overpowered things. That can be part of the fun. That’s how you gotta go about it as a content creator.” The broken aspect of Fortnite is what plagues the competitive scene often, and what keeps it from reaching the mainstream attention like a Counter-Strike or League of Legends.

Sypher discussed his burning passion for becoming a great competitive player before deciding content was the way to go.

“I used to stress so much about competitive. I was ready to buy a house in Virginia so I could have zero ping. I was ready to start boot camping with comp players. Like fly out four or six top players and we would just scrim and practice all day, every day,” clarified Sypher. “I was going to do that because I was so obsessed because I wanted to be great at competitive Fortnite. What would have stopped me from becoming really good competitively?”

It’s an interesting question to ask, considering the track record of unsuccessful competitive Fortnite players who focus primarily on content. It seems that the two are not mutually exclusive, at least not in the current state. Sypher would have likely quit his consistent content creation on his path to becoming a top player. The best players are not streaming every single event without taking a hit in some sense, whether from stream snipers or the pressure of a live audience. It’s challenging to balance all the points of competitive Fortnite, upload daily content, remain a top player and block out all of the noise.

Sypher explains how to be a successful competitive player 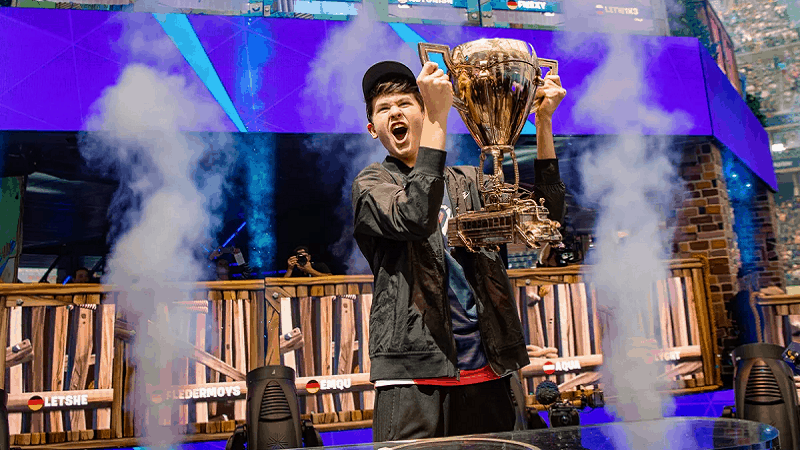 Can anyone be a professional Fortnite player? The answer is most likely yes, but it’s a gray area. Most of the highest-earning competitive players are in their early to mid-teenage years. Fortnite World Cup Champion Kyle “Bugha” Giersdrof won the most important tournament in the game’s three-year history at 16-years-old. It takes a lot of time and practice to earn the top prizes. Sypher is correct in saying that strong decision-making translates into success in Fortnite. But there is so much more to the equation because of the game’s complexity.

Competitive Fortnite will always be an enigma. Many fairweather viewers refuse to take it seriously, considering that it’s a Battle Royale filled with a younger, more immature player base. Those who are in the know understand what it takes to be the best. Decision-making, mechanics, aim, game sense, item selection and a little bit of luck often result in success. However, that success does not come without a price and hard work.

Sypher may have missed the boat on becoming a top competitive player. But earning hundreds of thousands on streaming and content is a much better long-term decision. Hopefully, Sypher will work hard again if Epic announces another World Cup.