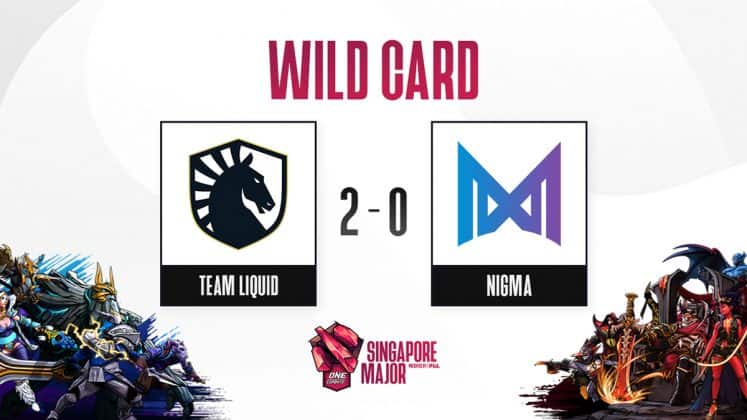 Let’s check out what happened in the series between Nigma, Team Liquid, PSG.LGD, and AS Monaco Gambit.

After waiting for so long, we finally have the chance to watch some of the best teams in the world going up against each other. However, before the actual event begins, we have to see what will happen in the Wild Card matches.

We take a look at each series that took place on March 27 in stream A. Needless to say, we got to see loads of interesting things, so let’s dive in.

The first series of the day was between the two European powerhouses who both did pretty well in the Upper Division. However, their efforts were not enough to guarantee themselves a direct invitation.

Most people thought that Kuro “KuroKy” Salehi Takhasomi and his team-mates would succeed, but this didn’t happen. Team Liquid managed to win both games of the series by using pretty much the same heroes. Both games lasted around 40 minutes, during which Team Liquid played really well.

One of the primary reasons for Nigma’s disappointing performance was the absence of Ivan Borislavov “MinD_ContRoL” Ivanov. The legendary offlaner was unable to attend the Major. Which is why TI 7 champions had to rely on Roman “rmN-” Paley.

It seems like Team Liquid was on-fire today, judging by their performance against the Chinese team. The first game did not go in favor of Zhang “Faith_bian” Ruida and his colleagues because Liquid had the better draft. The Chinese tried to build their draft around Morphling, but the EU powerhouse did not let them take advantage of their late-game potential. After just 32 minutes of play, they managed to win the game.

PSG.LGD changed their draft for the second game and decided to focus on some of the best meta heroes. That’s why they went for Wraith King and Void Spirit, two of the strongest cores right now.

Unfortunately, this was not enough to beat the mighty Team Liquid. Puck and Mars proved yet again that they work well together. Even though it was as easy as in game one, Liquid needed around 40 minutes to win their second series of the day.

After losing the series against Team Liquid, Nigma had to show everyone they have what it takes to be among the best. Unfortunately, they couldn’t live up to the expectations.

PSG.LGD also lost their first series, which is why they decided to pick some of their strongest heroes in the first game against Nigma. Kuro and his team-mates decided to try out the infamous Weaver and IO combo, which has proven to be effective.

Although they did pretty well, LGD’s Puck and Monkey King were too strong to deal with. Both heroes managed to accumulate a lot of items relatively fast, which was exactly what PSG.LGD needed. After a series of back-and-forth team-fights, the Chinese delivered their knock-out punch and focused on game two.

Nigma tried to use IO for the second time in the series, but PSG.LGD was prepared and picked a really strong draft. As expected, the laning stage went in their favor, which allowed them to participate in many team-fights. Even though Nigma had Alchemist in its draft, they were unable to keep up with their Chinese opponents, which is why they lost after just 32 minutes.

Nigma vs AS Monaco Gambit

Nigma’s fans were hoping to see their favorite team win at least one series, but sadly, it didn’t happen. Although they were considered the favorites, they were unable to win against the aggressive lineup of AS Monaco Gambit.

In game one, Nigma decided to pick heroes that allowed them to have really strong team-fights. Sadly, Gyrocopter and Death Prophet were not enough to stop Gambit’s Terrorblade. Besides the deadly carry, the CIS squad had another strong hero – Enigma. Amer “Miracle-” Al-Barkawi and the rest of his team tried to deal with Black Hole, but their efforts were not enough.

Following the loss, Nigma decided to get one of Miracle-’s best heroes – Morphling. The Dota 2 prodigy has proven numerous times that he can carry his team, but sadly, Gambit didn’t allow this to happen.

They got Enigma and Tusk yet again, but instead of picking TB, the CIS team decided to give Drow Ranger a chance. Even though their lineup didn’t seem that dangerous on paper, it managed to easily win the laning stage and slowly but steadily snowball out of control.

Besides Batrider, TI 7 winners didn’t have a way to catch the pesky Drow, which is why the hero was able to inflict tons of damage. As a result, Gambit gained a significant advantage and eventually won the series.

Nigma finished the day without winning a single game. Which means that it is probably time to make some changes.

Stay tuned for more daily coverage from the ONE Esports Singapore Major 2021!