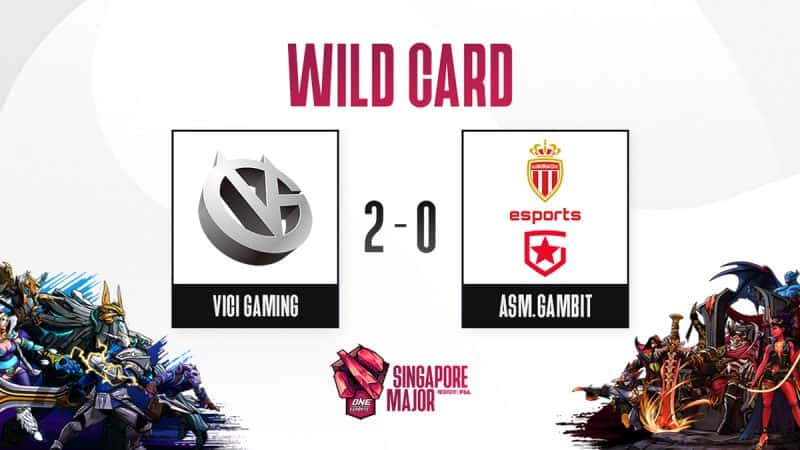 The Singapore Major has begun and Day 1 has already given us some interesting games.

The first game between Gambit vs T1 was a short one, with Gambit really bringing some unorthodox hero lineups. Starting Bristleback in the middle lane, Vladimir “No[o]ne” Minenko seemed to have full control over his boundaries. Taking the early mid advantage over Karl Jayme who was playing Batrider, Gambit had a good score to lead.

In the mid-game, Gambit had a decent farm on their cores and early game momentum was with them. Kiyalbek “dream” Tayirov who was playing IO made Aghanim’s Scepter and was dishing out too much damage for T1 heroes to handle. Gambit’s strength heavy line up allowed them to siege high ground and finish the game before T1 could get back on their feet.

The second game saw another stomp by Gambit. Although this game mainly looked like a drafting issue from T1’s side, surely more went wrong than just the hero line ups.

With heroes like Underlord, Viper and Monkey King on Gambit’s side, the team had enough early game heroes to invade T1 and leave very little space. T1, relying heavily on Slark and Alchemist, did not pay off. Even inclusion of a map control hero like Beastmaster did not seem to have much impact on the game, giving Gambit a 2-0 win over T1.

The first game between VC and Gambit looked incredibly even till the forty-minute mark. However, a fight between both the teams in Vici’s Dire jungle proved fatal for Gambit. Although Vasilii “AfterLife” Shishkin dropped a two-man Black Hole, it wasn’t enough to tilt the fight in Gambit’s favor. Dream, who was playing weaver, died in the fight but bought back and used Time Lapse to re-enter the fight. However, he couldn’t do much and gave away a die-back. The fight alone gave a huge gold swing in Vici’s favor which only increased over time in the game. Gambit failed to comeback in the game, giving away game one.

The second game was an over one hour fight between the two teams. The gold advantage also seemed to juggle between both the teams because of the high-intensity game and occasional team fights. Gambit seemed to take most of the lead when they took the middle lane Tier 3 and one of the barracks. However, Gambit failed to siege high ground on multiple occasions, giving away a lot of gold advantage in the failed team fights. This gave Vici a way back in the game. The final minutes of the game were heart wrenching when Gambit’s Wraith King was against Vici’s entire squad in a base race to destroy the Ancient. Unfortunately, Dream couldn’t win, giving Vici a 2-0 win against them.

The first game between T1 and Vici Gaming showed Vici’s organisation as a team. Although the game was even in the early game, Vici came on top in mid-game with a lot of action from their Void Spirit and Bloodseeker. Even with tanky heroes like Wraith King, Dragon Knight and Death Prophet T1 were melting in front of Bloodseeker and Troll.

The second saw T1 picking heroes like Medusa and Dragon Knight. Although the early game was looking good for T1, their non-mobile heroes couldn’t really do much against Vici’s swift ganks. The small skirmishes made a lot of space for Vici’s carry Terrorblade who ultimately was farmed enough to push Vici for their second victory.

Team Liquid completely stomped the first game against T1. The Razor pick for qojqva proved to be menacing for Forev’s Alchemist in the lane. T1 felt Razor’s impact throught the entire course of the game. On the other side, Liquid’s Timbersaw completely stopped Mars’s impact on the game. Overall, the game looked like a lost boat since the end of the drafting phase.

The second game looked much more even in the early game, but soon began to slip out of T1’s grasp after the twelve minute mark. Liquid’s Huskar pick on qojqva and miCKe’s Puck dominated the mid-game and made sure T1 stayed grounded. With both games ending under 30 minutes, Liquid gained a strong win, taking a 2-0 victory against T1.