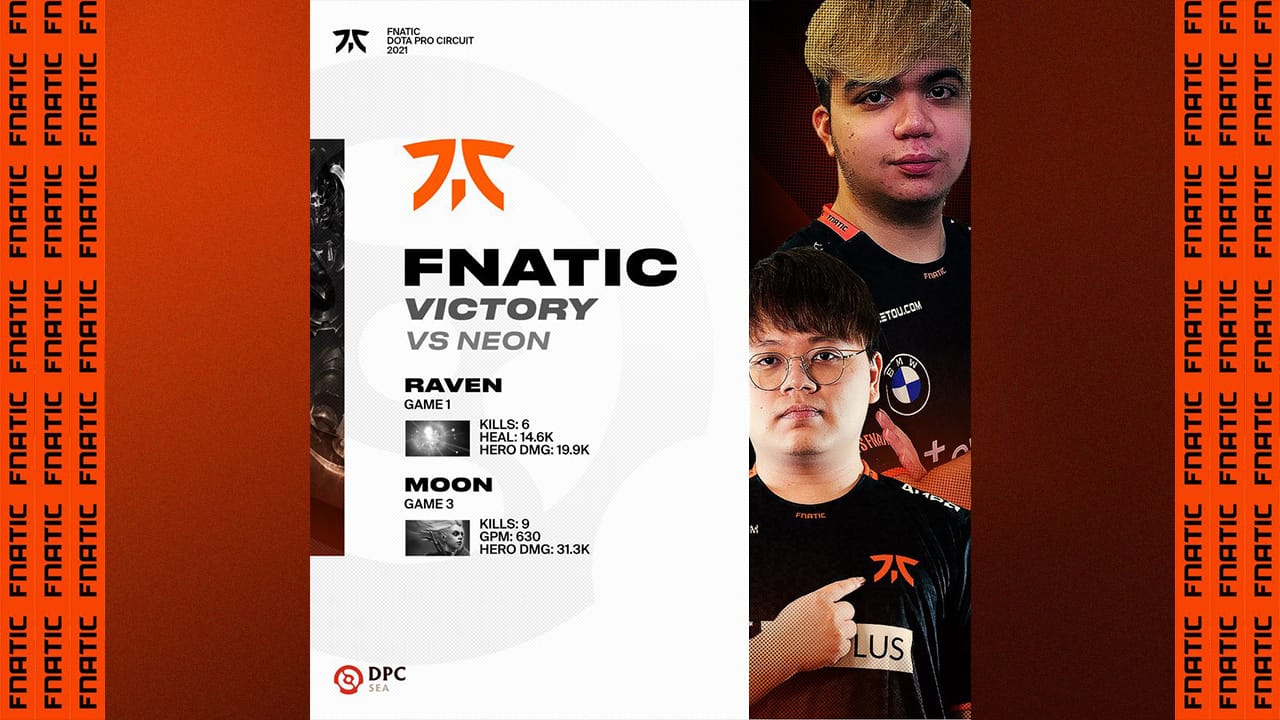 With just one more week of action left to go, we break down how our SEA teams are faring.

There have been some clear favorites across both our divisions in the SEA region. With Season 1 of the DPC drawing to a close, our Major invites about to be locked in.

Our Lower Division has seen a slew of new teams test their mettle in the DPC. So far, it’s Omega Esports and Lilgun who appear to be our strongest contenders for the Upper Division in Season 2.

But this week did see some life from Army Geniuses, who managed a victory of Yangon Galacticos to keep them safe from elimination.

Speaking of eliminations, YG have a tough fight ahead of them next week if they want to climb up from bottom place. So do Zero Two and HOYO, both teams currently tied 2-4 at sixth place.

Fnatic and Neon lead the pack in our Upper Division standings, and both could nab a direct invite to the Major. They’re both sitting at 5-1 currently. They faced off against each other in our mid-week series, and Fnatic took the win with a 2-1 victory.

We are now sooo close to the Singapore Major. GGs, @NeonEsportsDota, an insane series. #DPCSEA pic.twitter.com/cvN1zPCm9z

TNC Predator currently sit in third place after their 2-0 victory over 496 gaming.

But it was BOOM and Vice eSports who brought the highs and lows in Week 5. For BOOM it was the highs – they won both their series. Cleaning up against Execration, whose Week 1 victory seems far, far away now.

And for Vice eSports it was a very low week indeed. They lost early in the week against T1, and their final game against BOOM didn’t yield them a more favorable result.

Week 5 in the SEA region definitely wrapped up with a bang for BOOM Esports. They took out Vice in a brutal two-game series.

While Vice showed legs in game one, with carry Jinn Marrey "Palos" Lamatao Dragon Knight helping the team keep pace with BOOM’s farm. They even managed to swing the advantage to the Radiant side in a short-lived lead around the 20-minute mark. But BOOM managed to wrap this one up in just under 40-minutes.

Game two was a much rougher ride for Vice.

Rafli Fathur "Mikoto" Rahman was a force to be reckoned with on Windranger, he had a little difficulty securing his lane in the early game. But it wasn’t long before he was plenty farmed and BOOM were bringing the pain train. It’s worth mentioning the valuable role BOOM’s supports also played in game two. Team Captain Alfi "Khezcute" Nelphyana was instrumental on his Abaddon, assisting with securing over half of his team’s kills. The final score was 64-13 at 36-minutes. An impressive note to end the week on.

GGWP @viceesportsph
That's the end of our match in the group stage with victory. Currently we're sitting at home and waiting for the results for another teams in DPC League.#HungryBeast pic.twitter.com/NoqKFS2f6t

Nuengnara "23savage" Teeramahanon played as a stand in for BOOM during this series, and the Thai players expertise certainly helped secure the win in both games. He racked up 20-kills in game one, and in gamed two his K/D/A was 25/3/19.

It’s unlikely we’ll see BOOM on stage at the Singapore Major. They’re currently sitting square in the middle of the standings, at 5th place. But if they can keep up this momentum next Season, we may just see them slide in as a Wild Card.

This loss places Vice in last place for our Upper Division, which means they’ll have to duke it out in the Lower Division in Season 2.