The Ageless Heirlooms 2022 treasure included with the Battle Pass 2022 has fashionable skins for your favorite heroes.

The Battle Pass 2022 has brought with it several rewards that are worth every moment spent in Dota 2. You can unlock exclusive treasures with the Battle Pass 2022, including the Ageless Heirlooms 2022, The Battle Pass Collection 2022, Immortals I, and Immortals II. Players can obtain new sets for Anti-Mage, Chaos Knight, Razor, Zeus, Medusa, Night Stalker, and Mars, among others. Take a look at these fantastic Mythical sets that can be unlocked for these heroes by earning the prestigious Ageless Heirlooms 2022 treasure in Dota 2.

Anti-Mage – Howls of the Northmarch Anti-Mage is one of the fastest heroes in the game. The melee hero is draped in Indigo Blue armor to protect him against enemy attacks. Anti-Mage has maroon facial hair that matches his tattoos. He has a thick beard and a long ponytail that lend him the look of a modern hunter. His shoulder is padded with a comfortable armor with white feathers emerging from them.

The weapons in his left and right hand are charged with electricity. The Agility hero wears a blue shield on his back. Anti-Mage’s belt is colored in rustic wooden brown and has the emblem of a fox with glowing eyes. The Howls of the Northmarch set includes Ambient Effects for the Anti-Mage that will make him look smashing while fighting in battles.

Templar Assassin – Faction of the Feather Templar Assassin is a carry hero who can pierce the armor of her enemies. She can use her Psi Blades to deal damage to multiple enemy units standing behind each other. The Faction of the Feather set for the Templar Assassin gives her an elegant look that can lure her opponents to her. You can find purple, pink, green, and yellow strokes in the Mythical set.

Her hair is fashioned with a pink ribbon and is decorated with a dagger to keep it in place. You can find wild feathers perched on the arm of the Templar Assassin. She wears a fearsome mask with teeth bulging forward. The Faction of the Feather set for the Templar Assassin includes a beautiful loading screen that can be enabled in the game.

Chaos Knight – Melange of the Firelord Chaos Knight is a Strength hero and a durable tank in Dota 2. The Melange of the Firelord set for the Chaos Knight is textured with lava red metal for the melee hero. The hooves and the tail of his stead are covered in scorching red lava that looks stunning on screen while moving about the different lanes in the game.

It has sharp spikes popping out of the shoulder and helmet of the Chaos Knight. The eyes of Chaos Knight and his stead are burning red with flames. His weapon represents a piece of art that can pummel opponents down to the ground. It includes a nerve-wracking loading screen that shows the Chaos Knight prepared for battle. Razor is a lightning-fast hero with abilities that can force his enemies into submission. The Heinous Exultation set for Razor makes him appear as a feudal lord. The Mythical set has shades of electric blue and jet black on his armor. He uses a long strand of lightning as his weapon to whip his enemies into shape.

The Agility hero carries a shield with the face of a demon mounted on it. The mouth and eyes of the demon on the shield are glowing with blue light. His belt has the image of a heart pouring out electricity. You wouldn’t want to mess with Razor while he wears the Heinous Exultation set in Dota 2. Monkey King is a mighty hero who can stun enemies and deal damage to units in a radius around him. The Tangled Tropics set for the Agility hero provides leafy ornaments on the Monkey King. While wearing this Mythical set, you can find many tinges of yellow, green, red, and blue on the Monkey King.

Leaves and vines are sprung around the Monkey King to grant him a vibrant skin during the Battle Pass 2022. Blue crystals are woven onto the pieces that cover his forehead, arms, belt, and weapon.

Zeus – Fury of the Thunderhawk Zeus is an Intelligence hero known for getting kill streaks in most Dota 2 games. The Fury of the Thunderhawk set for Zeus turns him into a mighty commander who can strike down his enemies with his Lightning Bolts. His battle outfit has touches of teal, blue, white, yellow, and purple embroidered into it.

The items for his shoulder and head have depictions of a bird in flight. His ability to watch over his teammates while they push lanes and destroy towers can be described. A captivating loading screen is bundled with the Fury of the Thunderhawk set.

Death Prophet – Oaths of the Beloved 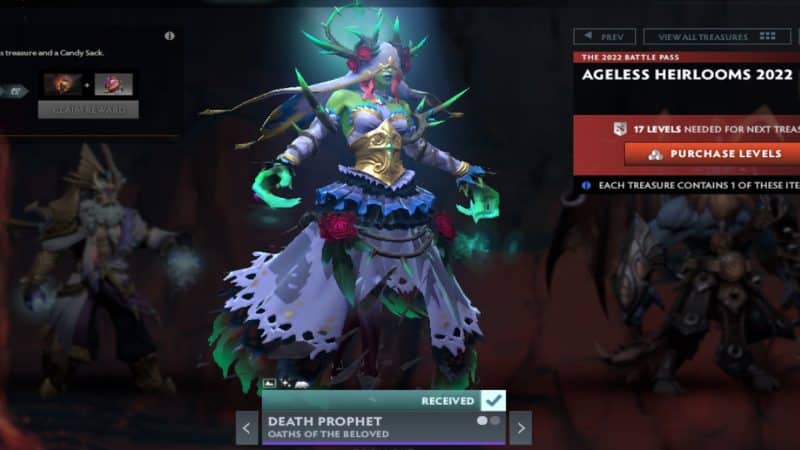 Death Prophet is a ranged hero. She can nuke her enemies with waves of Crypt Swarms to demoralize her enemies. Death Prophet can be dressed in an adorable outfit with the Oaths of the Beloved set. It has several colors have been used for the outfit that include blue, purple, green, yellow, and red.

The bottom of the dress is adorned with purple skulls. Her head is covered with a cloth that has organic elements attached to it. She wears a beautiful yellow corset that shines during team fights. There are bright red roses that are strapped to her head and waist to make her abilities bloom in battle. The Oaths of the Beloved set for Death Prophet includes a Ghost model that can be summoned with Exorcism. These Ghosts carry a bouquet with them and light up your screen with their presence. It also has a loading screen bundled with it. Night Stalker is an aggressive hero who can chase down enemies on the map. The Twilight Legions set for the Night Stalker has items that have splashes of brown, yellow, grey, and white. The wings of the Hunter in the Night are cinematic and have white rings piercing through them.

The Twilight Legions set is rare and is offered as a bonus reward in the Ageless Heirlooms 2022 treasure during the Battle Pass 2022. You may have to open several treasure chests to unlock this exquisite set for the Night Stalker. 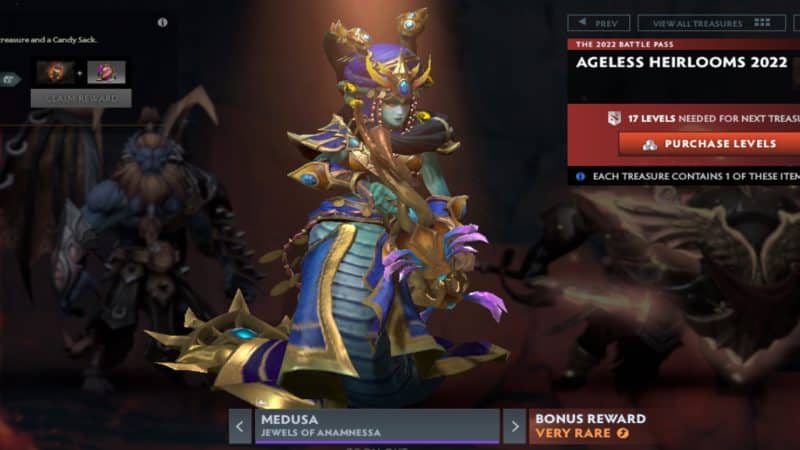 Medusa is an Agility hero who can turn the tide of battle with Stone Gaze, her ultimate ability. The Jewels of Anamnessa set for Medusa reveals her beauty and elegance in a mysterious way. Her garments are colored in blue, purple, and yellow.

Her bow resembles an ancient weapon that can obliterate enemies in Dota 2. Her waist is surrounded by pieces of metal that shimmer while Medusa slithers through the lanes. Medusa wears a large headpiece that cushions her face and protects her hair-like serpents.

It is a scarce bonus reward that is included with the Ageless Heirlooms 2022 treasure. It also has a marvelous loading screen bundled with it. The bracers on her arms, the end of her tail, and her forehead have teal crystals that make her outfit remarkable in the game. You’d be lucky to get your hands on this Mythical set for Medusa during the Battle Pass 2022. Mars is a Strength hero who can disposition enemies and trap them with his abilities. The Wings of Imperium set for Mars is an outstanding outfit for the melee hero. The Mythical set includes Ambient Effects and Animation sequences that can make his skills spectacular to perform in the game.

You can use Spear of Mars, God’s Rebuke, and Arena of Blood with refreshing Ambient Effects to baffle your friends and allies. Dota 2 players can equip Wings of Imperium to gain glory for Mars during their matches played with the Battle Pass 2022.

The top of his helmet, the wings on his shield, and the tip of his weapon emanate an orange glow. The maroon robe worn by Mars has a rich texture that blends with his facial hair. It is an ultra-rare bonus reward that is included with the Ageless Heirlooms 2022 treasure.