You can use these tips to improve your Dota 2 games while playing Brewmaster in Diretide with the Battle Pass 2022.

The new year brings people in the Dota 2 community tons of gameplay to look forward to. Part II of the Battle Pass 2022 has released Diretide for its users to play and enjoy during the start of 2023.

You can score Taffy collected from Greevils in enemy wells. Roshan will step out of his pit, once every few minutes, to destroy the well with the most Taffy scored in it. Each team gets up to 4 wells that they can defend against Roshan and enemy heroes in Diretide matches. The first team to have Roshan destroy all 4 enemy wells will win the game.

There are loads of challenges and quests that can be achieved with the Battle Pass 2022 to earn amazing rewards. You can complete Weekly Quests to gain additional battle points. Each week, players can attempt to finish a number of Weekly Quests that can provide stars for accomplishing the feats.

You can spend the bonus battle points earned from Weekly Quests, Cavern Crawl challenges, and Diretide matches to unlock rewards. The Immortal Treasure II 2022, Battle Pass Collection 2022 treasure, and Ageless Heirlooms 2022 treasure are among the rewards that can be achieved with the Battle Pass 2022.

Here are a few tactics you can use to learn how to play Brewmaster in Diretide matches to receive bonus battle points in 2023.

How to Play Brewmaster in Diretide 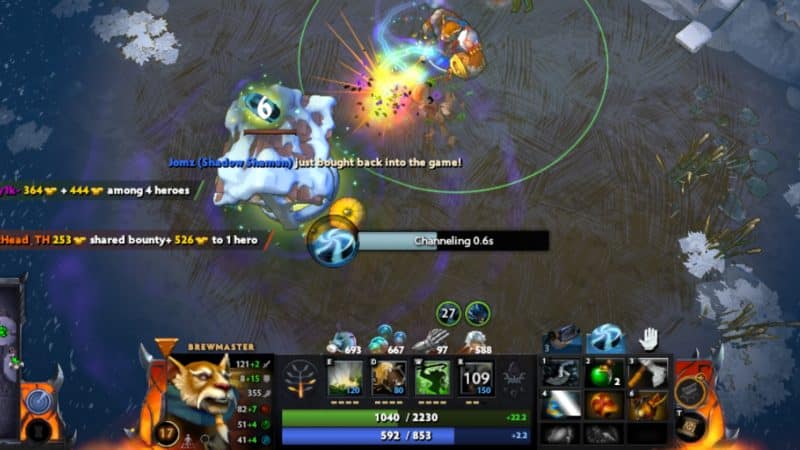 Brewmaster is a durable Strength hero in Dota 2. He can slam the ground to deal damage to multiple enemy heroes around him and ignite them into flames for additional damage. His abilities make Brewmaster harder to kill during team fights and help the melee hero survive battles longer in Diretide mode.

Mangix spawns into the game with 660 health and 255 mana. You can head to the center of the map after the game starts to find Greevils walking around Roshan’s pit in Diretide matches. Brewmaster can ride his mount to reach Greevils faster than his enemies to collect more Taffy early into the game. 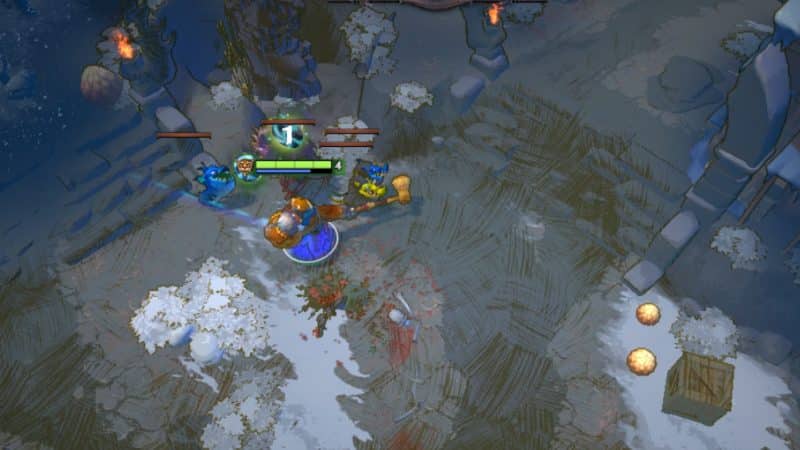 You can nuke Greevils on the map with Thunder Clap to collect tons of Taffy in seconds while playing Brewmaster. The Strength hero can use Thunder Clap to prevent enemy heroes from escaping from team fights. Thunder Clap has a cooldown of 13 seconds and consumes 120 mana in the game.

Brewmaster can use his ability, Cinder Brew, to ignite his enemies in battles. Enemy heroes around Brewmaster are drenched in alcohol after Brewmaster uses Cinder Brew to slow them in Diretide matches. Cinder Brew ignites opponents into flames by dealing any damage from spells.

Ignited enemy heroes take up to 320 damage and have their movement speed slowed by 36%. The effects of Cinder Brew last for up to 5 seconds on enemy units. Cinder Brew has a cooldown of 11 seconds and requires 80 mana.

Mangix can use the passive ability, Drunken Brawler, to gain various bonuses in the game. The Earth Brawler provides 1 armor and up to 5% magic resistance to the Brewmaster. The Storm Brawler grants 15% evasion and 5% increase in his movement speed, helping the Strength hero evade physical attacks during battles.

The Fire Brawler provides a 24% chance to deal 145% critical damage with his moves. These abilities are strengthened by 3x while enemies are ignited by Cinder Brew. You can switch between the Earth, Storm, and Fire Brawlers at any time.

His ulti, Primal Spirit, splits Brewmaster into 3 mighty warriors. Each of these 3 warriors has unique abilities that make them tremendously useful in team fights. You can attack multiple Greevils while Primal Split is active to gather more Taffy in Diretide games. These mighty warriors have over 1000 health and can deal massive amounts of damage to enemy heroes and Taffy Guardians.

Primal Spirit has a cooldown of 120 seconds and needs 175 mana in the game. Primal Split lasts for up to 20 seconds. If any of the 3 mighty warriors remain by the end of the duration of Primal Split, Brewmaster is reborn. His ulti can help Mangix get out of team fights without dying in Diretide mode.

Items to Buy for Brewmaster in Diretide 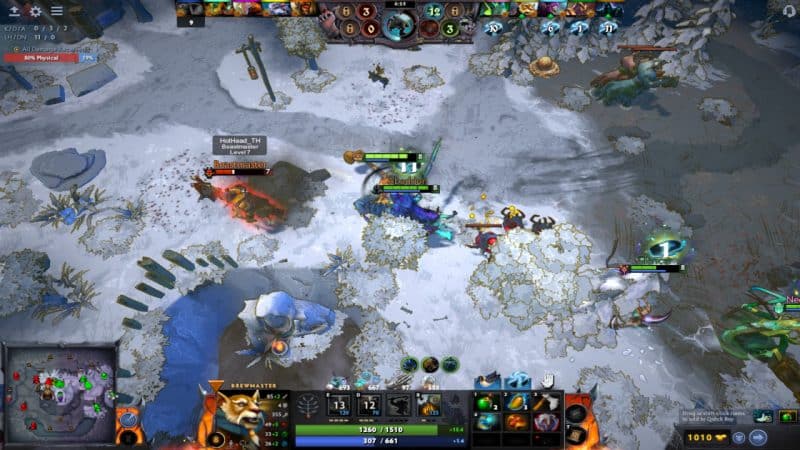 Arcane Boots provides 250 mana and 45 movement speed for the Brewmaster. The item costs 1300 gold in the game. You can replenish up to 175 mana to all allies in a radius of 1200 around Mangix using Arcane Boots. It has a cooldown of 55 seconds.

Brewmaster can nuke enemy heroes and Greevils plenty of times with Thunder Clap to deal damage in Diretide mode with Arcane Boots equipped. The additional mana from Arcane Boots will allow the Strength hero to have sufficient mana to cast his ulti.

Pipe of Insight grants 30% magic resistance and 8.5 health regeneration to the melee hero. You can purchase Pipe of Insight for 3475 gold in the game. The item provides Brewmaster with Insight Aura that increases the health regeneration rate of the Strength hero and his allies by 2.5. Insight Aura also provides 15% magic resistance to Mangix and his teammates. It has a radius of 1200.

Brewmaster can cast Barrier to protect his allies from taking increased damage from spells using Pipe of Insight. Allies imbued with Barrier can absorb up to 450 magical damage from spells that are cast by enemy heroes in Diretide matches. Barrier lasts for up to 12 seconds in the game. It has a cooldown of 60 seconds and consumes 100 mana. 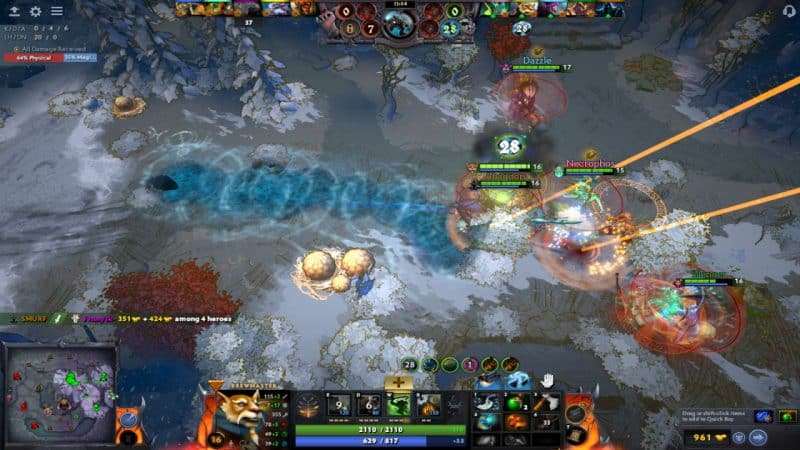 Crimson Guard provides 250 health, 12 health regeneration, and 8 armor to Brewmaster. The item can be bought for 3600 gold in the game. Brewmaster has a 60% chance to block 75 damage from incoming attacks by purchasing Crimson Guard.

Mangix can cast Guard using the item on all allies in a 1200 radius. Guard helps allies block up to 75 damage for 12 seconds. Crimson Guard has a cooldown of 35 seconds. Brewmaster can tank more damage while fighting Taffy Guardians in Diretide matches by having Crimson Guard to protect him and his allies before scoring Taffy in enemy wells. 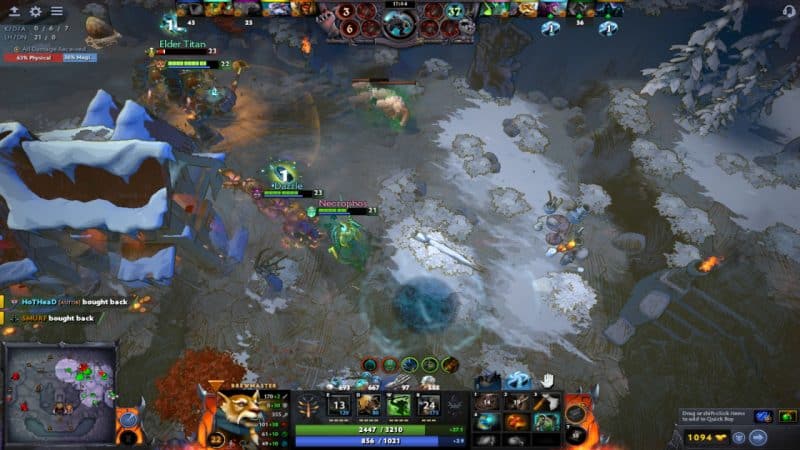 Best Allies for Brewmaster in Diretide

Magnus is an amazing Strength hero in Dota 2. He has several abilities that can be used to assist Brewmaster in getting more kills in Diretide matches. Magnus can cast his abilities to disposition enemy heroes and disable them in battles.

Allies can use Shockwave while playing Magnus to collect Taffy from Greevils. Shockwaves deals up to 300 damage to enemy units. It has a range of 1400 and slows the movement speed of enemy heroes by 75% for up to 0.9 seconds. Shockwave has a cooldown of 10 seconds and consumes 110 mana.

Magnus can enter battles and use Skewer to push enemy heroes away from their team. Brewmaster can attack enemies that are pulled away by Magnus to crush them in team fights during Diretide matches. Skewer deals 350 damage to all enemy units that are affected by the ability.

Puck is an Intelligence hero who can nuke enemies with her spells to silence them. The ranged hero can cast Waning Rift to deal 250 damage to all enemy heroes in a radius of 400 and silence them for up to 3.5 seconds.

Allies can use Puck’s ulti, Dream Coil, to deal an initial damage of 310 to enemy units. All enemies affected by Dream Coil will be latched and take 400 damage by moving away in any direction for a distance of 600. Brewmaster can destroy enemy heroes while they try to escape from Dream Coil.