Find out how to play Bane in Dota 2 to win more Diretide matches with the Battle Pass 2022.

People with the Battle Pass 2022 can participate in Diretide, a new seasonal game mode that has excited the online community. Diretide games can be played between November 3, 2022 - January 12, 2023. You can hit Greevils in Diretide matches to collect Taffy with your favorite heroes in Dota 2.

Attack Greevils and score the Taffy that you have gathered in enemy wells in Diretide mode. Each team can defend their 4 wells from being destroyed by Roshan. The well with the most Taffy scored in it will be attacked by Roshan, once every few minutes. The first team that can get Roshan to destroy all 4 enemy wells will win the Diretide match.

You can unlock treasure chests with amazing skins for heroes with the Battle Pass 2022. Some of these skins include the Tangled Tropics set for the Monkey King, the Obsidian Atrocity set for the Lifestealer, and the Limbs of Lycosidae set for Broodmother. These sets are available in exclusive treasure chests that can be unlocked by earning bonus battle points. Players can complete Weekly Quests with the Battle Pass 2022 to gain additional battle points from their games.

Take a look at this guide to help you learn how to play Bane in Diretide matches.

How to Play Bane in Diretide 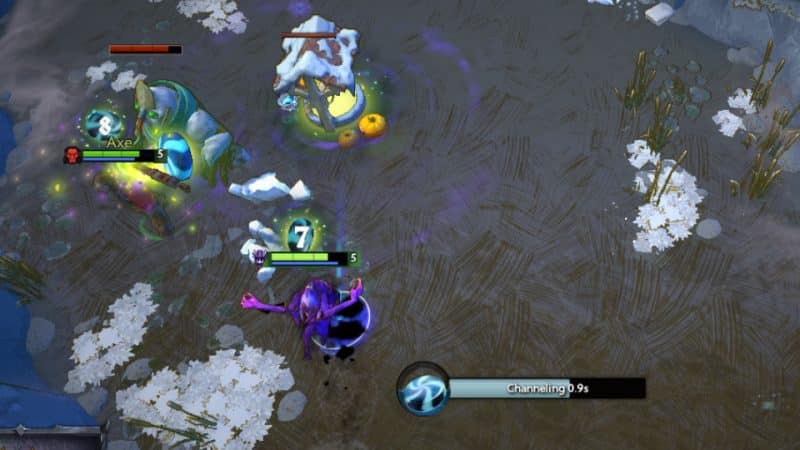 Bane is an exceptional support hero in Dota 2. The Intelligence hero can disable multiple enemies with his spells to prevent his allies from dying in battles. People can pick Bane to counter carry heroes with high attack damage in Diretide games.

The ranged hero has a balanced set of abilities that let Bane dismantle his enemies at the right moment. You can cast spells that restore health to Bane and paralyze enemy heroes on the map. His skills can be used to interrupt opponents before they can score all the Taffy they’ve collected into your wells.

Many people who play Bane underestimate the resourcefulness of Brain Sap against his foes. You can level up Brain Sap early in the game to defend yourself from incoming attacks. Brain Sap can be cast on enemy heroes to deal 300 Pure damage to them. Bane will instantly regain 300 health after using Brain Sap on his opponents. Brain Sap has a cooldown of 11 seconds and consumes 160 mana per cast.

Bane can cast Nightmare on enemy heroes to prevent them from collecting Taffy in Diretide mode. The ranged hero can use Nightmare to deal 35 Pure damage per second (DPS) for up to 7 seconds. You can use Nightmare on opponents near enemy wells to avoid being interrupted while your allies score Taffy.

Nightmare has a cooldown of 15 seconds and requires 165 mana in the game. Bane can cast Nightmare within a range of 650. The damage dealt to enemy heroes with Nightmare can heal Bane after reaching level 10 through the Talent Tree.

Players can use Enfeeble to weaken carry heroes in Diretide matches. You can cast Enfeeble to reduce the attack damage of enemy heroes by up to 60%. Enemy units affected by Enfeeble will also have their health regeneration rate reduced by 60% for a duration of 11 seconds.

You can use Enfeeble on heroes like Alchemist and Dragon Knight to reduce their health regeneration rate during battles. Enfeeble has a cooldown of 7 seconds and needs 70 mana to be used.

His ulti, Fiend’s Grip, can be used to restrain the movement of enemy heroes. You can use Fiend’s Grip to cancel the channeling of your opponents while they deposit Taffy in your wells. Fiend’s Grip can disable enemy heroes for up to 6 seconds. Enemy units affected by Fiend’s Grip take up to 150 Pure damage per second (DPS). Fiend’s Grip has a cooldown of 100 seconds and consumes 400 mana.

The support hero can roam the map to assist allies in killing enemy heroes. You can use Fiend’s Grip to hold carry heroes in place to let your teammates deal lethal damage to them in Diretide mode. Bane can cast Enfeeble on his opponents before disabling them with Fiend’s Grip to reduce their restorative abilities.

Items to Buy For Bane in Diretide 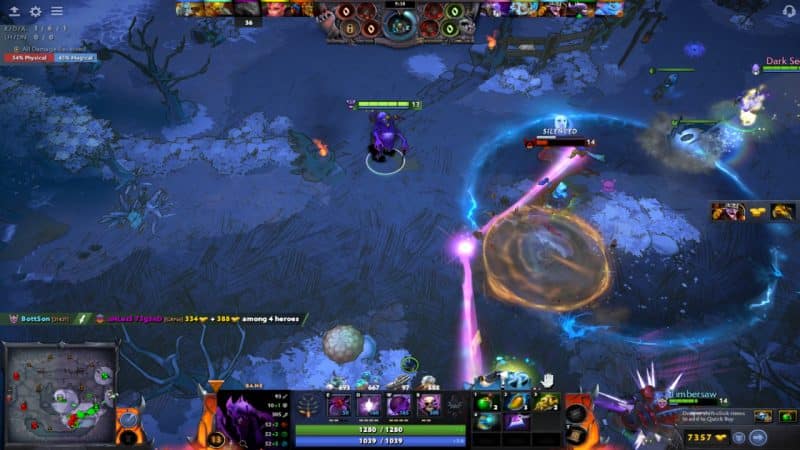 Bane is an Intelligence hero with a base mana of 339. You can purchase Arcane Boots to increase the mana pool of Bane by 250 and boost his movement speed by 45. Arcane Boots cost 1300 gold in the game.

The ranged hero can restore 175 mana to allies in a 1200 radius using Arcane Boots. It has a cooldown of 55 seconds. You can upgrade Arcane Boots to Guardian Greaves later in a Diretide match to restore health and mana to your teammates. Bane can restore up to 350 health and 200 mana to his allies using Guardian Greaves, providing the replenishment people need to defeat enemy heroes in Diretide games. 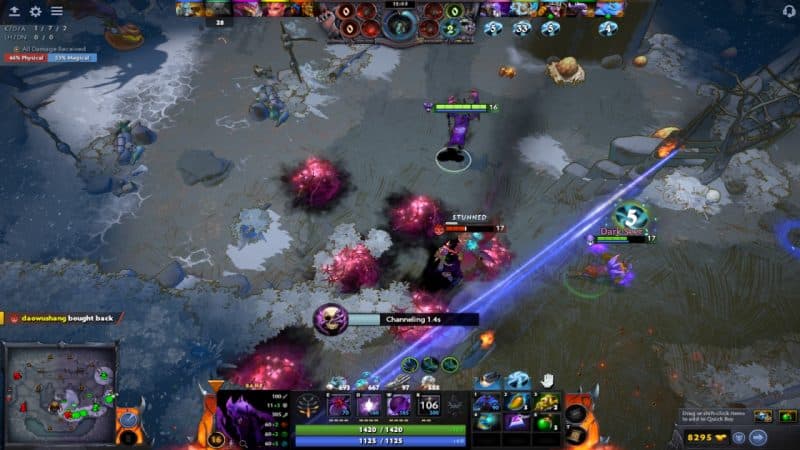 Glimmer Cape is an item that is used frequently by people who play Bane in Dota 2. Bane gains 20% magic resistance by equipping Glimmer Cape. People can use Glimmer Cape to turn invisible for 5 seconds. Bane can easily cast spells and channel his ulti, Fiend’s Grip, while Glimmer Cape is activated.

Bane gains an additional 50% magic resistance after using Glimmer Cape. You can use Glimmer Cape on allies to turn them invisible during battles as well. Glimmer Cape has a cooldown of 14 seconds and consumes 90 mana to be used. It can be bought for 1950 gold.

Dagon is an item that can be used to get quick kills in Diretide matches. The support hero can deal 400 burst damage on enemy heroes by using Dagon. A level 1 Dagon will cost you 2700 gold in the game. You can upgrade Dagon up to 4 times to deal a maximum of 800 magical damage to opponents.

Spirit Vessel grants 250 health, 2 Intelligence, 2 Agility, 2 Strength, 2 armor, and 1.75 mana regeneration to Bane. You can purchase Spirit Vessel for 2980 gold in the game. Bane can use Soul Release by equipping Spirit Vessel in Diretide matches.

Every enemy hero killed within a radius of 1400 around Bane will provide a charge for Soul Release. Bane can use Soul Release to deal 35 DPS to enemy heroes for up to 8 seconds. You can also heal allies for 40 health per second by using Soul Release on them. Spirit Vessel has a cooldown of 7 seconds. 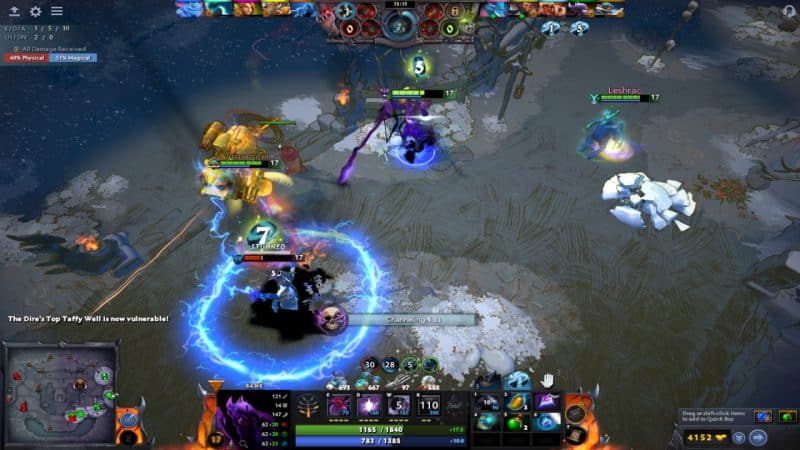 Linken’s Sphere can be used to block magical spells targeted at Bane in Diretide mode. The item provides 16 Intelligence, 16 Agility, 16 Strength, 7 health regeneration, and 5 mana regeneration in the game. Bane can block targeted spells once every 14 seconds with Linken’s Sphere. The support hero can channel his ulti longer with a Linken’s Sphere in his inventory.

Best Allies for Bane in Diretide

Chaos Knight is a carry hero who can summon illusions to fight by his side. Bane can use Fiend’s Grip to disable enemies while Chaos Knight uses his ulti, Phantasm, to deal bonus damage. Phantasm creates 3 illusions of Chaos Knight that deal 100% of his attack damage to enemy heroes in battles.

He can obliterate enemies before the duration of Fiend’s Grip elapses in Diretide games after using Phantasm. Chaos Knight’s ulti has a cooldown of 75 seconds and requires 175 mana. Allies playing Chaos Knight in Diretide matches can cast Chaos Bolt to stun enemy heroes for up to 4 seconds.

Enemy heroes who are stunned by Chaos Bolt can take up to 300 damage. Chaos Bolt has a cooldown of 10 seconds, allowing Chaos Knight to cast it several times on enemy heroes while collecting Taffy. Allies will need at least 140 mana to cast Chaos Bolt on their opponents.

Physical attacks from Chaos Knight have a 33.3% chance of dealing critical damage after leveling up Chaos Strike. The passive ability can deal up to 245% additional damage from the Strength hero’s attacks. Chaos Knight gains 50% of the damage dealt by Chaos Strikes as Lifesteal.

Weaver is an Agility hero who can run toward enemy wells and score more Taffy by attacking Greevils. The ranged hero can team up with Bane to decimate enemies in battles. Bane can reduce the attack damage and health regeneration rate of enemy heroes by casting Enfeeble on them.

The Agility hero can further weaken carry heroes by casting The Swarm on enemies affected by Enfeeble. The Swarm can latch onto enemy heroes and reduce their armor by 1 per attack. Allies can max out Germinate Attack to gain an additional attack once every 3 seconds.

Teammates can choose Weaver in Diretide matches to be able to move quickly between Greevil camps and enemy wells. Weaver can use Shukuchi to deal 175 damage to enemy units. The Agility hero gains maximum movement speed for up to 4 seconds after using Shukuchi.

Allies can use Time Lapse during difficult situations to regain health while playing Weaver in Diretide matches. Weaver can use Shukuchi to reach opponents while Bane uses his ulti in team fights. Shukuchi has a cooldown of 6 seconds and consumes 60 mana in the game.