Here’s how to play Ancient Apparition in Diretide to help you win more matches in Dota 2 with the Battle Pass 2022.

Millions of Dota 2 players are teaming up with their friends to play Diretide games with the Battle Pass 2022 during the festive season. You can play Diretide matches on an entirely new map that is available to people between November 3, 2022 - January 12, 2023.

Diretide matches can be won by helping Roshan destroy enemy wells in the game. People can attack Greevils on the Diretide map to collect Taffy and score them in the enemy well. Each team gets 4 wells that they can defend against enemy heroes in Diretide mode.

Players can choose from 4 different mounts to ride into battle in Diretide matches with the Battle Pass 2022. These mounts can help players reach team fights faster without missing the action. Fight Taffy Guardians with your team and deposit Taffy in the enemy wells to lure Roshan into destroying them for you. The first team to get all 4 of their enemy wells destroyed by Roshan will win the Diretide game.

Battle Pass 2022 provides plenty of ways to earn additional battle points. You can complete Weekly Quests that are rolled out each week to push your limits in esports while playing Dota 2. These Weekly Quests can challenge beginners and professional gamers to showcase their skills and earn stars to receive thousands of battle points as rewards.

People who are new to Diretide mode can try their hand at playing support heroes. You can help the team collect more Taffy in Diretide games by nuking enemy heroes with spells that can weaken them in battles. Take a look at this deep dive into how you can play Ancient Apparition in Diretide mode to win more games.

How to Play Ancient Apparition in Diretide 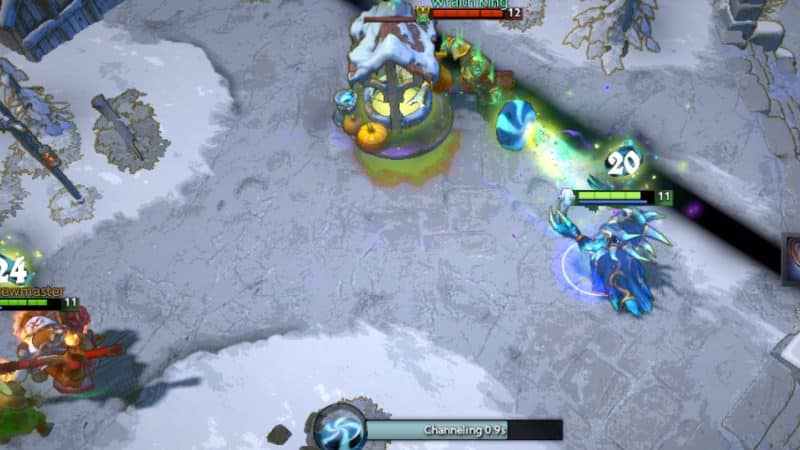 Ancient Apparition is a bone-chilling support hero in Dota 2. He can use his skills to stun enemy heroes, slow the movement speed of enemy units, increase the damage dealt from magic spells, restrict the health regeneration rate of his opponents, and destroy foes with low health.

The Intelligence hero can cast his abilities to slow the movement of Greevils around Roshan to kill them and collect more Taffy. Ancient Apparition can stun enemy heroes who are trying to score Taffy in your wells using Cold Feet, preventing Roshan from getting to your wells in Diretide.

He has 600 HP and 351 mana at the start of the game. Ancient Apparition has base stats of 23 Intelligence, 20 Strength, and 20 Agility. He gains 3.4 Intelligence per level. The ranged hero has a maximum range of 675 on his physical attacks and has a base attack damage of 44 - 54. 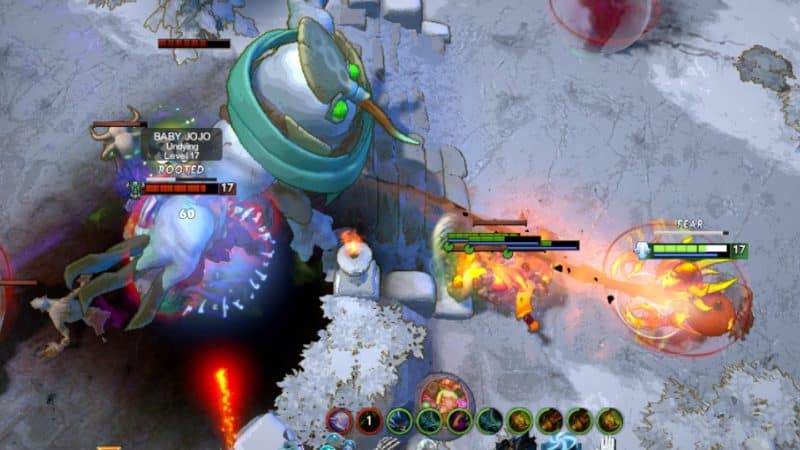 The ranged hero can use Cold Feet to stun Greevils, neutral creeps, and enemy heroes in the game. Cold Feet deals up to 90 damage per second (DPS) for up to 4 seconds. Enemy units who do not move away from their initial position to at least 715 distance will be stunned for up to 3.5 seconds after being hit with Cold Feet. It has a cast range of 1000. Cold Feet has a cooldown of 9 seconds and requires 125 mana.

You can use Ice Vortex to slow down the movement speed of enemy units and amplify the damage dealt from magical spells. Enemy units affected by Ice Vortex will have their movement speed slowed by 25% and take an additional 25% damage from spells in the game. An Ice Vortex can last for 14 seconds and affects all enemy units in a radius of 300. It also deals 40 DPS.

His ulti, Ice Blast, can be used to deal up to 400 damage to enemy units anywhere on the Diretide map. Enemy units hit by Ice Blast will not be able to heal for up to 12 seconds. Ice Blast deals 32 DPS to enemy heroes and will instantly kill them after the health of an enemy hero drops below 14% of their maximum health. It has a cooldown of 40 seconds and consumes 175 mana in the game.

Items to Buy for Ancient Apparition in Diretide

Urn of Shadows is an item that can be purchased for 880 gold. Ancient Apparition gains 2 Intelligence, 2 Agility, 2 Strength, 2 armor, and 1.4 mana regeneration by purchasing Urn of Shadows.

Ancient Apparition can cast Soul Release using Urn of Shadows to heal allies and deal damage to enemy heroes. Soul Release gains a charge every time an enemy hero dies within 1400 radius of the Intelligence hero.

Ancient Apparition can use Soul Release to heal allies for 30 health per second. It can also be used to deal 25 DPS to enemy heroes. Soul Release has a duration of 8 seconds and has a cooldown of 7 seconds. People can upgrade Urn of Shadows to Spirit Vessel later in the game. 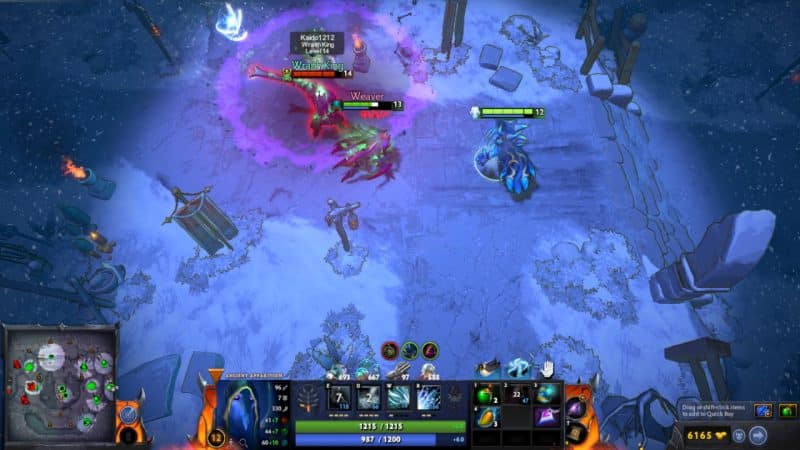 The item has a cast range of 1200 and affects all enemy units in a 600 radius, including Greevils and neutral creeps in Diretide mode. Magic Weakness has a cooldown of 22 seconds and needs 50 mana.

The support hero can purchase Aether Lens for 2275 gold in the game. Ancient Apparition gains 300 mana and 2.5 mana regeneration by equipping Aether Lens in his inventory. Aether Lens increases the range of his spells and items by 225. You can upgrade Aether Lens to Octarine Core to reduce the cooldown of the Intelligence hero’s spells. 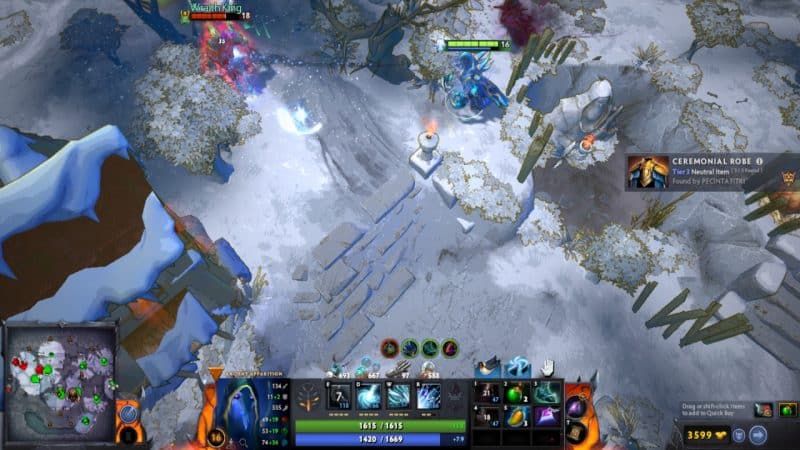 Rod of Atos provides 24 Intelligence, 12 Agility, and 12 Strength to the Ancient Apparition. The item costs 2750 gold in Diretide matches. Ancient Apparition can cast Cripple using Rod of Atos to root enemy units for 2 seconds. It has a cast range of 1100. Rod of Atos has a cooldown of 18 seconds and requires 50 mana.

Slark is an Agility hero, known for his ability to use the strength of his enemies against them. Ancient Apparition can cast Ice Vortex and Cold Feet to slow the movement speed of enemy heroes in Diretide matches while playing with Slark in the team. Slark can pounce on enemy heroes affected by Cold Feet to restrict their movement, causing them to be stunned for up to 3.5 seconds.

The Agility hero can use Dark Pact to deal up to 300 damage to enemy units affected by Cold Feet. The passive ability, Essence Shift, can be used to drain the attributes of his enemies with each hit. The attributes drained from enemy heroes in battles will be converted to Agility. These attributes can last for a duration of 80 seconds after hitting an enemy hero in Diretide.

Ancient Apparition can cast Ice Blast while an enemy unit is leashed by Slark to annihilate them. Pounce can keep enemy heroes on a leash for up to 3.3 seconds, providing plenty of time for Ancient Apparition to cast abilities like Ice Vortex, Chilling Touch, and Ice Blast.

Items like Veil of Discord and Rod of Atos can help Ancient Apparition increase his effectiveness as a support hero in the game. You can also purchase Arcane Boots, Mekansm, and Guardian Greaves to replenish the health and mana of Slark during team fights.

Venomancer is a support hero who can combine his abilities with Ancient Apparition to deal massive amounts of damage to multiple enemies in Diretide. The ranged hero can use Venomous Gale to deal an initial damage of 125.

These spells can drain the health of enemy units and prevent them from fleeing battles. Ancient Apparition can use Ice Blast after Venomancer uses his ulti, Poison Nova, to decimate enemy heroes. Your team can safely score Taffy after killing enemy heroes in Diretide.