Here’s a detailed guide on how you can play Abaddon in Diretide matches with the Battle Pass 2022 in Dota 2.

People are celebrating the festival season by playing the new Diretide mode in the massively multiplayer game. Diretide is a seasonal game mode that has been introduced to Dota 2 players with the Battle Pass 2022. Players can fight Greevils, Taffy Guardian, and a number of heroes to defend their wells from Roshan in Diretide mode.

The Diretide map provides 4 wells for each team. You can attack Greevils around Roshan to collect Taffy and drop them off at the enemy wells. Take out the Taffy Guardian to help your team score more Taffy before Roshan finds your allies. Roshan will attack the well with the most Taffy in it from time to time. The first team to lose all 4 enemy wells to Roshan will lose the Diretide match.

How to Play Abaddon in Diretide Abaddon is a melee hero who can slow the movement speed of his enemies and silence them with his physical attacks. He can use his skills to shield his allies and heal them in battles. The Strength hero can be a reliable hero to tank damage from enemy attacks and Taffy Guardians in Diretide games.

The carry hero has 640 HP and 291 mana at the start of the game. He has base stats of 22 Strength, 23 Agility, and 18 Intelligence. Abaddon gains 2.6 Strength per level. He has base attack damage of 50 - 60, letting him strike Greevils with ease for more Taffy. 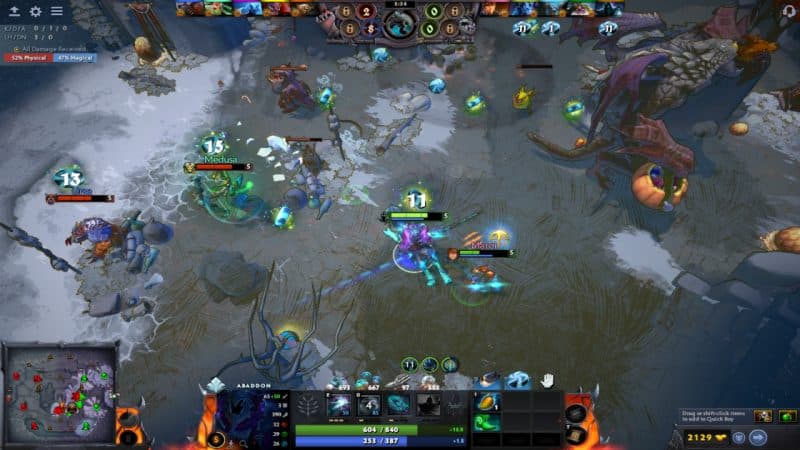 The Strength hero can use Mist Coil to protect his teammates in battles. Mist Coil can be cast on allies to heal them for 260 health. Abaddon can also use Mist Coil on enemy heroes to deal 260 damage to them in team fights. Mist Coil has a cast range of 575 in the game. It has a cooldown of 5.5 seconds and consumes 50 mana.

You can cast Mist Coil on your opponents early in the game to get First Blood with the Strength hero. Mist Coil can be tremendously resourceful to help your allies escape from the brink of death during battles. You can carry a few Enchanted Mangoes with you while playing Abaddon to quickly regain mana before using Mist Coil on allies and enemy heroes in Diretide matches.

Aphotic Shield can be cast on yourself and your allies to prevent taking damage. You can use Aphotic Shield on Abaddon while attacking Greevils in the game to collect Taffy without getting hit. Aphotic Shield can make a significant difference while tanking damage from enemy heroes and Taffy Guardians in Diretide games. Many people with the Battle Pass 2022 choose Abaddon to guard their team against enemy attacks.

Abaddon can strike enemies to gain bonus movement speed and attack speed using Curse of Avernus. The passive ability lets Abaddon silence enemy units after striking them with 4 hits from his blade. Silenced enemies will not be able to cast spells for 4.5 seconds. Enemy units affected by Curse of Avernus will have their movement speed reduced by 60% and provide a bonus 100 attack speed to Abaddon while hitting them.

His ulti, Borrowed Time, can be activated at any time to nullify damage from all incoming attacks and magical spells. Borrowed Time will be enabled after Abaddon’s health drops below 400 HP in the game. Any amount of damage that Abaddon takes while Borrowed Time is active heals the Strength hero in battles.

Borrowed Time can last for up to 6 seconds. It can be helpful while defending the team against Roshan, Taffy Guardians, and ambushes from enemy heroes on the Diretide map. His ulti has a cooldown of 40 seconds. You can reduce the cooldown of Borrowed Time by 8 seconds by reaching level 20 through the Talent Tree.

Items to Buy for Abaddon in Diretide

Blade Mail can increase the tanking capabilities of the Strength hero. The item provides 28 attack damage and 6 armor by equipping Blade Mail on Abaddon in Diretide games. Abaddon can activate Blade Mail to return up to 85% of incoming damage back to enemy units and enemy heroes for 5.5 seconds.

Blade Mail has a cooldown of 25 seconds and consumes 25 mana. Abaddon can easily take down Taffy Guardians without taking lethal hits with Blade Mail in his inventory. Blade Mail costs 2100 gold in the game.

Abaddon can hit an enemy twice in quick succession using Echo Strike after buying Echo Sabre. Echo Strike is a passive ability provided by Echo Sabre that slows the movement speed by 100% of enemy units for 0.8 seconds. The item costs 2500 gold in the game. The carry hero gains 60 attack damage and 15% evasion by purchasing Radiance for Abaddon. The Burn aura provided by Radiance deals 60 magical damage per second (DPS) to all enemy units around Abaddon in a 700 radius.

Radiance can help Abaddon deal damage to multiple Greevils around Roshan in Diretide games. The item lets you collect an increased number of Taffy around Roshan’s pit and score them in the enemy well. Radiance costs 5050 gold in the game.

Best Allies for Abaddon in Diretide

Bloodseeker is an Agility hero who can help Abaddon get more kills and assists in Diretide mode. The melee hero can cast Blood Rite to silence enemies in a 600 radius and silence them for 6 seconds, allowing Abaddon to deal more damage in battles against enemy heroes. Enemy units affected by Blood Rite take up to 240 Pure damage. Blood Rite has a cooldown of 12 seconds and consumes 120 mana.

Allies playing Bloodseeker can cast Rupture on enemy heroes to prevent them from fleeing while facing Abaddon in battles. Rupture deals up to 55% of the distance moved as Pure damage to enemy units for up to 12 seconds. It has a cast range of 800. Rupture has a cooldown of 70 seconds and requires 200 mana in the game.

Bane is an Intelligence hero who can paralyse enemies in battle. The ranged hero can use Enfeeble to reduce the attack damage and health regeneration rate of enemy units in Diretide mode. Allies can easily weaken carry heroes by using Enfeeble on enemies attacking Abaddon.

The Intelligence hero can use Nightmare to put enemies to sleep in the middle of team fights. Nightmare can last for a duration of 7 seconds, providing adequate time to let Abaddon escape from battles without dying.

Bane’s ulti, Fiend’s Grip, can be used to hold enemies in place for up to 6 seconds. Enemy units affected by Fiend’s Grip can take up to 150 DPS. Fiend’s Grip has a cooldown of 100 seconds and requires 400 mana.

Pudge is a Strength hero who can pull enemy heroes toward him from incredibly far distances in Dota 2. He can use Meat Hook to grab enemy units from a maximum distance of 1300 and deal 360 Pure damage to them. Meat Hook has a cooldown of 12 seconds and needs 110 mana.

People can help Abaddon get more kills by isolating enemy heroes using Meat Hook. Purchasing a Blink Dagger for Pudge can make him an elusive hero in Diretide matches. Pudge can activate Rot and Dismember after hooking enemy heroes to disable them for 3 seconds.

Oracle is a support hero capable of turning Abaddon into an indomitable ally in Diretide games. He can use Fortune’s End to root enemy heroes for up to 2.8 seconds. Enemy units affected by Fortune’s End can take up to 280 damage. Fortune’s End has a cooldown of 6 seconds and needs 100 mana to be cast. Abaddon can approach rooted enemies and silence them with Curse of Avernus to gain an advantage in battles.

Abaddon can be healed by Oracle using Purifying Flames. Oracle can use Fate’s Edict before he casts Purifying Flames to prevent Abaddon from taking damage from his spells. Purifying Flames can heal Abaddon for up to 396 health over a duration of 9 seconds. It has a cooldown of 2.5 seconds and requires 75 mana.

Oracle’s ulti, False Promise, can be used to protect Abaddon against incoming damage. All damage dealt to Abaddon can be delayed by 10 seconds after using False Promise. Oracle’s ulti has a cooldown of 60 seconds and consumes 200 mana in the game. Oracle can cast Purifying Flames multiple times on Abaddon during the duration of False Promise to restore his health in battles.