These are some of the easiest Weekly Quests in Dota 2 that can earn you more stars during Week 15 with the Battle Pass 2022.

Weekly Quests are a set of challenges that people can attempt to win bonus battle points from their matches in Dota 2. People with a Battle Pass 2022 can level up faster by completing Weekly Quests that are assigned each week to earn exclusive treasures.

You can obtain new skins from the treasures that are provided through the Battle Pass 2022 during the festive season. These skins include the Melange of the Firelord set for Chaos Knight, the Molten Bore set for Mars, and the Tremors of the Tandem Storm set for Disruptor. You can unlock these skins by opening treasure chests provided by the Battle Pass 2022.

People can play an entirely new game mode, Diretide, by purchasing the Battle Pass 2022 to celebrate the holiday season. Players have to defend their wells against enemy heroes and Roshan to win Diretide matches in Dota 2.

Each team has 4 wells that they need to protect. People can attack Greevils around Roshan to collect Taffy and score them in enemy wells. Roshan will destroy the well with the most Taffy in it. The first team to get Roshan to destroy all 4 enemy wells will win the Diretide game.

Take a look at the easiest Weekly Quests that you can complete during Week 15 with the Battle Pass 2022 to earn more battle points.

The Reason We Won - Plant 18 trees in winning games

You can plant trees in Dota 2 to consume for bonus health regeneration. There are certain heroes in the game who can use trees to their advantage during battles, such as Treant Protector, Windranger, and Mars. 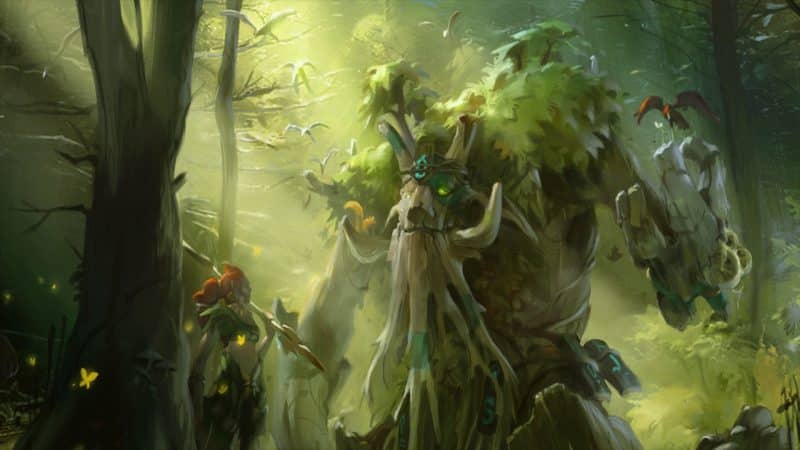 Treant Protector is a support hero who can heal allies and disable enemy heroes in team fights. The Strength hero can increase the health regeneration rate of his teammates to prevent them from dying in the game.

The melee hero can disguise himself among the trees to gain unobstructed movement in the forest. It can be harder to target Treant Protector with physical attacks and spells while he is Tree Walking. You can purchase a few Iron Branches to carry with you while playing Treant Protector to earn more stars for The Reason We Won Weekly Quest during Week 15.

You gain 1 Strength, 1 Agility, and 1 Intelligence with an Iron Branch. The item costs 50 gold in the game. Treant Protector can plant a tree using Iron Branches anywhere on the map to activate Nature’s Guise while he is around it.

To plant a tree, you can choose the Iron Branch and point it on the ground. These trees can last for up to 20 seconds after being planted. Consuming a tree that is planted by you can provide twice the health to Treant Protector.

The support hero can use Nature’s Grasp to create a path of vines that slow enemies down and deal damage over time. Enemy units affected by Nature’s Grasp take up to 60 damage per second (DPS) and have their movement speed slowed by 35%. The DPS is increased by 50% if the vines touch any trees that are nearby. These vines can last for up to 12 seconds. Nature’s Grasp has a cooldown of 17 seconds and consumes 90 mana. You can reduce the cooldown of Nature’s Grasp by 5 seconds at level 10.

You can use trees in the forest to gain vision by purchasing an Aghanim's Scepter for Treant Protector. The Strength hero gains a new ability, Eyes in the Forest, after equipping an Aghanim’s Scepter. Eyes in the Forest can be used to turn trees into living Observer Wards, providing vision in an 800 radius around them.

Enemy creeps and heroes around trees that have Eyes in the Forest planted on them will entangle heroes when Treant Protector uses his ulti. Overgrowth, his ulti, can be used to root enemy units for up to 5 seconds in the game. Rooted enemies take up to 85 DPS. Overgrowth has a cooldown of 100 seconds and needs 300 mana.

Treant Protector’s spells like Overgrowth and Leech Seed can take more than 100 mana to use per cast. You can purchase Arcane Boots to increase the mana pool of Treant Protector by 250 mana and increase his movement speed by 45. Treant protector can restore 175 mana to his allies and himself by using Arcane Boots in battle.

Arcane Boots costs 1300 gold and has a cooldown of 55 seconds. You can upgrade Arcane Boots to Guardian Greaves later in the game. Guardian Greaves can be used to restore 350 health and 200 mana to all allies in a 1200 radius, making it an amazing item that can help Treant Protector win more matches in Dota 2. Windranger is an Intelligence hero who can play a carry role and a support role in most games. The ranged hero can nuke enemies in lanes and destroy towers with her arrows. Her spells and her attributes make her a formidable hero in the game.

Windranger can plant trees that can be used to stun enemy heroes in Dota 2. You can easily plant 18 trees to gain 3 stars for The Reason We Won Weekly Quest during Week 15. These trees can be used to hurl a Shackleshot on an enemy hero during battles.

Shackleshot can be used to shackle an enemy hero to a tree that is directly behind them. Enemy units affected by Shackleshot are stunned for 3.8 seconds. Shackleshot has a cooldown of 10 seconds and consumes 100 mana in the game. You can reduce the cooldown of Shackleshot by 2 seconds at level 10.

You can launch a Powershot straight at an enemy hero who is shackled to a tree. Powershot deals up to 450 damage to an enemy unit. It can take up to a second to channel Powershot during a team fight. It has a cast range of 2600, making it incredibly useful for hunting enemy heroes on the run. Powershot has a cooldown of 9 seconds and needs 120 mana.

Players can target enemy heroes with Focus Fire, Windranger’s ulti, to deal massive amounts of damage. You can use Focus Fire on a stunned hero shackled to a tree to annihilate them in battles. Windranger gains 500 bonus attack speed for 20 seconds while having 30% less attack damage. Focus Fire has a cooldown of 30 seconds and requires 125 mana.

Mjollnir can be an effective item for Windranger to help her win more matches in Dota 2. Windranger gains 70 attack speed and 24 attack damage by purchasing Mjollnir. Each physical attack from Windranger has a 30% chance to release a bolt of lightning that deals 180 damage to multiple opponents around the Intelligence hero.

You can use Static Charge using Mjollnir to guard allies from incoming attacks from enemy heroes. Static Charge can be used on allies and on yourself to cast a shield. Any attack on targets guarded by Static Charge have a 20% chance to release lightning that deals 225 magical damage to 5 enemy units in an 800 range. Static Charge has a duration of 15 seconds. It has a cooldown of 35 seconds and consumes 50 mana.

Windranger can have a significant advantage in battles by equipping Arcane Blink. Spells cost 25% less mana for 6 seconds after Windranger uses Arcane Blink to teleport herself. Arcane Blink costs 6800 gold. It has a cooldown of 15 seconds.