Take a look at this guide to help you complete Weekly Quests in Dota 2 during Week 16 of the Battle Pass 2022.

Each week, Dota 2 players can accomplish various Weekly Quests to gain bonus battle points. People with the Battle Pass 2022 are taking their time to perform specific actions to earn thousands of battle points in the massively multiplayer game. These Weekly Quests can help you improve your skills and teamwork to unlock robust rewards.

The rewards included with the Battle Pass 2022 include the Immortal Treasure II 2022, Battle Pass Collection 2022 treasure, and Ageless Heirlooms 2022 treasure. These treasures have a number of stunning sets for heroes, such as, the Draconic Divide set for Dragon Knight, the Hides of Hostility set for Huskar, and the Heinous Exultation set for Razor.

Part II of the Battle Pass 2022 has introduced people to Diretide, a new seasonal game mode in Dota 2. People can play Diretide matches till January 12, 2023, to score Taffy in the game. Players can hit Greevils around the Diretide map to collect Taffy and place them in enemy wells.

Roshan will emerge out of his pit to destroy the well with the most Taffy in it. Each team can defend 4 wells from being attacked by Roshan. The first team to lose all 4 of their wells will lose the Diretide match.

Here’s a detailed look at how to complete Weekly Quests during Week 16 with the Battle Pass 2022.

Play It Up - Play 8 matches 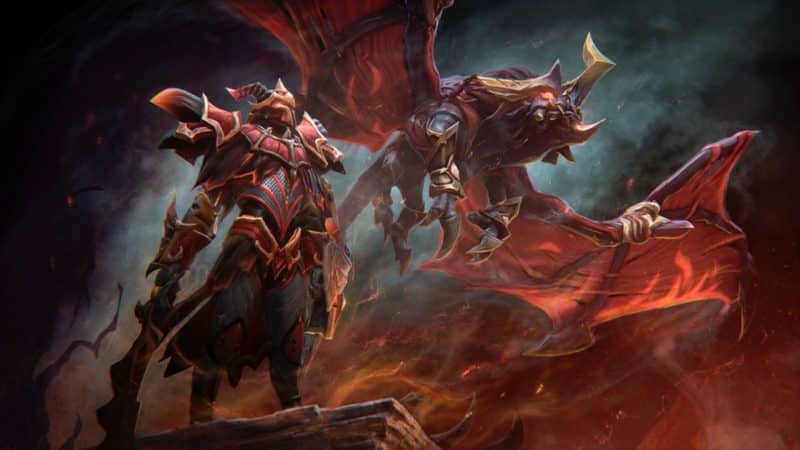 Dragon Knight is a durable carry hero in Dota 2. The Strength hero can reduce incoming damage from enemy heroes and stun his opponents to win more games online. Dragon Knight gains additional armor and health regeneration throughout the game that makes him unbeatable in most games.

The melee hero can turn into an Elder Dragon that has a range of abilities to demoralize his enemies. Dragon Knight can use Breathe Fire to deal damage to several enemy heroes at once. He can stun ancient neutral creeps and enemy heroes using Dragon Tail while playing Dragon Knight.

Dragon Knight can deal up to 320 damage to all enemy units in front of him using Breathe Fire. The Strength hero can reduce the attack damage of enemy heroes by 30% by nuking them with Breathe Fire in team fights. The attack damage reduction can last for up to 11 seconds. It has a cooldown of 11 seconds and consumes 105 mana to be used.

His ulti, Elder Dragon Form, can be used to gain ranged attacks for a limited duration. Dragon Knight can transform into a Green Dragon at level 1 of his ulti. The Green Dragon gains a passive ability, Corrosive Breath, that can deal up to 20 poison damage per second (DPS). These attacks also work on towers and other structures in Dota 2.

The Elder Dragon Form at level 2 can turn Dragon Knight into a Red Dragon. Physical attacks from the Red Dragon deal Splash damage, spreading 75% of the attack damage of Dragon Knight to all enemy units in a 350 radius. These attacks have Corrosive Breath as well.

Dragon Knight can become a Blue Dragon at level 3 of his ulti. The Blue Dragon can make Dragon Knight a force to be reckoned with in Dota 2. Dragon Knight learns a new passive ability, Frost Breath, that can slow the movement speed and attack speed of his enemies by 40%. Frost Breath affects all enemy units within the range of Splash damage and deals additional poison damage.

His ulti has a maximum duration of 60 seconds. Elder Dragon Form has a cooldown of 105 seconds and consumes 50 mana in the game. You can increase the attack range of Dragon Knight by 175 while his ulti is active by reaching level 20 through the Talent Tree.

Dragon Knight can increase his attack damage by 88 after purchasing Daedalus. The Strength hero has a 30% chance to deal 225% of his attack damage through Critical Strike. The passive ability, Critical Strike, can be tremendously useful against carry heroes in the game. The Blue Dragon form of the Dragon Knight can annihilate multiple heroes with lethal physical attacks by equipping Daedalus in his inventory. Enchantress is a support hero who can heal her allies and slow the attack speed of her enemies. She can use the range of her attacks to deal bonus damage that can destroy enemy heroes in battle. The intelligence hero can stifle her opponents in lanes and prevent them from farming gold in the game.

Neutral creeps can be controlled for up to 120 seconds using Enchant. These neutrals gain an additional 500 health, 8 armor, and 70 bonus attack damage while being controlled by Enchantress. You can also use Enchant on enemy heroes to slow their movement speed by 55% for up to 6 seconds. Enchant has a cooldown of 16 seconds and consumes 70 mana.

You can level up Impetus to deal Pure damage with her physical attacks. Enchantress can deal up to 20% of the distance between her and her target as bonus damage to enemy units in Dota 2. Impetus has a cooldown of 6 seconds at level one that can be removed after maxing it out. Each physical strike from Enchantress with Impetus requires 50 mana per hit.

Her ulti, Untouchable, is a passive ability that reduces the attack speed by 200 of all enemy units that strike her. Untouchable can pierce spell immunity. It can be useful while fighting carry heroes with increased attack speed like Troll Warlord, Bloodseeker, and Night Stalker.

Enemy units affected by Hurricane Pike can take up 5 hits from Enchantress without range restrictions and provides a 100 bonus attack speed to the Intelligence hero. It has a cooldown of 19 seconds and requires 100 mana.

You can play a few games with Enchantress to gain more stars for the Play It Up Weekly Quest during Week 16. Items, such as, Hurricane Pike and Arcane Boots can drastically improve your gameplay while playing the support hero in Dota 2.