A living legend, Captain Amari is a sniper of great renown. Being one of Overwatch’s founding members, Ana’s story can be traced all the way back to the early days of the international task force when she served as co-captain. Now known under many aliases, the elite markswoman returns to mend a broken world as one of Overwatch’s many colorful support heroes.

“Horus” sports an impressive off-support kit that can dramatically change the outcome of any fight on the field. Players old and new will be pleased to find that Ana’s skills remain untouched in the sequel, save for the added passive ability for Supports. This is in part due to her well-balanced capabilities and the impressively consistent winrate we’ve seen since her last buff (which was two years ago). If it ain’t broke, don’t fix it.

Read about all the recent hero changes that came with the Season 2 hotfix here.

She’s more challenging than most healers, but she breaks the mold by rising above. With that said, here’s how you get the most out of your gameplay when you play as the legendary Shrike herself.

Armed with her trusty Biotic Rifle, Ana whittles down her targets and heals damaged allies. Her bullets pass through friendlies with full HP, so feel free to spam fire on a clump of allies if need be. Aiming down sight makes your primary fire hitscan, and Ana cannot deal critical damage through headshots.

The Biotic Grenade functions much like her rifle, giving a burst of healing and dealing damage to enemies. Enemies affected by this cannot heal for 4 seconds, and allied heroes receive 50% more healing from all sources (even health packs scattered throughout the map). The Biotic Grenade is the most versatile thing in Ana’s short list of abilities, so use it well, and always keep an eye on its cooldown.

Her Sleep Dart disables enemy players with the “sleep” condition for 5 seconds. Blizzard recently buffed the cooldown from 15 to 14 seconds, making Sleep Dart more effective in the Tank meta. If a sleeping enemy takes a single point of damage, they wake up. Simple as that.

Ana’s Nano Boost is probably the best off-support ultimate ability in the game. This single-target attack power booster shot gives your allies a quick burst of health and a 50% damage reduction for 8 seconds. 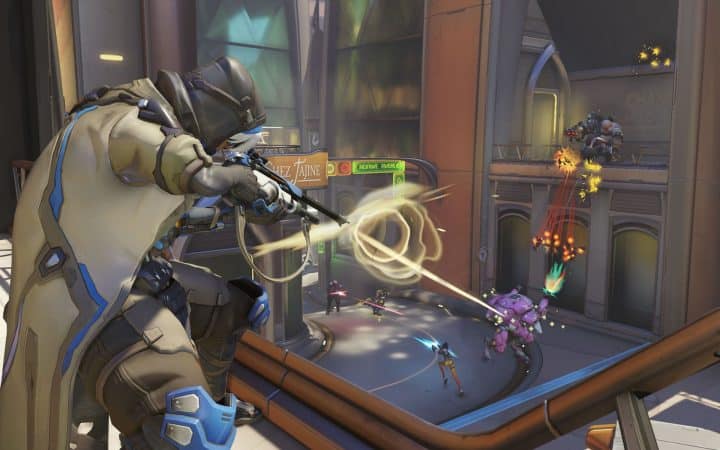 Ana offers more in exchange for any sustainable ability to defend herself fully. That being said, survivability isn’t her strong suit, so communication with your team is vital to counter-sneaking enemies and capitalize on sleeping targets. Successful flick shots with your Sleep Dart can always get you out of a bind, but will take a lot of practice!

Aiming down sight with your biotic rifle has its advantages and disadvantages. You send out projectiles when you fire from the hip, which makes it harder for the opponent to track where you are. On the other hand, using the scope makes your shots hit their target instantly (also known as “hitscan”), but leaves a bullet trail that reveals your position. Weigh the risks, and quickscope often to prevent any unwelcome visits from enemy flankers.

Use your biotic grenade in grouped team engagements, and try to save it until you need to turn things around in teamfights or flanker 1v1s. A good team heal from your grenade can give your team the extra longevity they need to score an ace. The 4-meter splash radius will disable any enemy heals, while empowering yours. This ability can counter Zenyatta’s “Transcendance” beautifully. Another cool tip to remember is that self-regenerating shields also count as healing.

A neat trick you can do with your sleep dart involves the 1-second delay upon cast. This presents an obvious downside, but you can also use this last-second window to redirect your shot and change the projectile’s target. Hitting a hero with your sleep dart also deals damage, albeit miniscule. This skill arguably takes the longest to master properly, so pat yourself on the back when you manage to stop a Dragonblade Genji in his tracks.

Save Nano Boost for the most crucial moments in the game. Find consistent players who would make the most out of its tremendous power, but also remember that its 250 HP boost can bail out any heroes you want to save from a hot spot. Damage reduction in Overwatch 2 is capped at 50%, which means that it cannot stack with Bastion’s 20% resistance when he transforms.

All Ana players know that timing and proper positioning are key to using her effectively. Opt to peek around far, hidden corners and high platforms with easy line of sight on your team's tank.

Another important note is that heroes in the support role heal after a few seconds outside of combat. Use this to your advantage. Pace yourself and find safe places to recover. Keep yourself alive, and the people you help will thank you for it. For more tips and tricks on all your favorite Overwatch heroes, follow us on ESTNN.