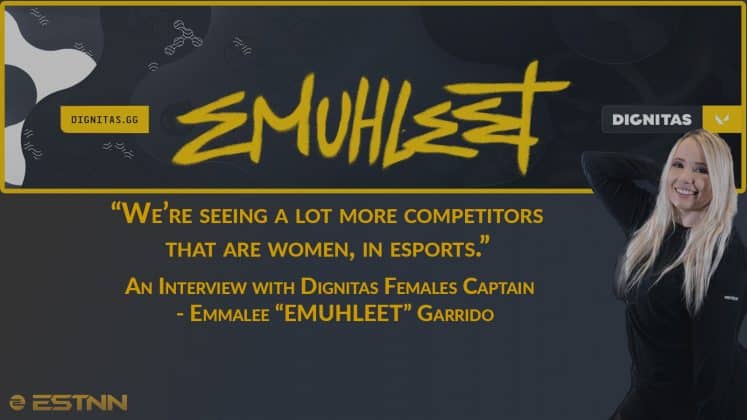 EMUHLEET talks to ESTNN about the growing power of women in gaming.

What is it like to be a woman in today’s esports scene? How much harder do women have to work in order to have a career in esports? ESTNN asked Emmalee “EMUHLEET” Garrido, in-game leader of Dignitas’ all-women Valorant team about the topic of women in pro gaming. (We also spoke with her about the team, and herself, and how they got their start, you can check that out here!)

Women in esports; earning their place on the stage

When we asked Emmalee if she felt it was more difficult for women in the esports space, she was frank that a few years ago her answer, probably would have been, yes.

“But now I’m realizing that because teams like my team were pioneers in esports, paving the way for young girls – because we did have a really difficult path when we first started playing – it’s a little bit easier now.”

As Emmalee points out, teams like hers have helped blaze a trail.
“And because so many other amazing esports figures like casters, team owners… It’s a much different time now.”

The general attitudes are changing too.

“We have these amazing programs at high schools and colleges that anyone can join.” She explains, emphasizing that, “they are really open and welcoming.” Finding those sort of communities was something which Emmalee herself had difficulty with when she got her start. “When I first started playing games, I didn’t tell anybody because I didn’t want to be seen as a loser or nerd – that’s what it was back then.” She explains, “But now it’s just such a different, amazing time to be in esports, no matter who you are.”

Of course, it’s not just finding a community or even your gender at the end of the day.

“In terms of being a pro player, it’s hard for anybody, whether you’re a male or a female, not just women in particular.” Emmalee points out. “You have to put in a lot of hard work to get where you want to get. I think that can apply even outside of gaming as well.” Still, when she first started playing, she says she did feel like she had to prove that she “deserved to be there.” A feeling many female gamers can relate to on some level.

“I had to work 10 times harder than I normally would have,” Emmalee says, “to be where I am today.”

What was involved in the journey from starting out to taking the stage as a pro?
“I practiced on my own for countless hours improving my aim,” She says. “I studied pro players, I did whatever I could to get to where I am, to get better and to prove my spot.” And even once she was winning tournaments, “there were always mistakes that I made. Things that I could’ve done better.” But while Emmalee does think she had to work harder to prove her worthiness in the community, she believes it paid off. “Honestly, I think having to work hard to earn something is a lot more satisfying than having something handed to you.”

An industry moving toward acceptance

Despite having to prove she could measure up, Emmalee does feel like the community has shifted to be more inclusive and supportive of female pros.

“When I first started playing, there wasn’t that many girls that were playing.” She explains. “There were a few who showed up to events just to watch and there were a lot of fans of esports.”

But she says that’s all changing now.

“We’re seeing a lot more competitors, that are women, in esports.” She tells us. “I think CS:GO really helped with that, in terms of creating all-women tournaments, because it encouraged women to start competing.” Emmalee also points out the growing presence of mixed qualifying events and online leagues in the esports ecosystem too. “A lot of people don’t know this, but my team and I only play in 2 or 3 all-women tournaments a year.” She says, “Other than that we’re competing in mixed qualifying events or playing on online leagues all year long.”

The team works extremely hard, practicing 8 hours a day, 5 days a week, to achieve the success they’ve reached so far.

“And there a lot of other teams that are working hard too.” Emmalee says, “With Valorant, they created VCT Game Changers which is an all-women’s tournament.” She explains. “We are seeing more teams than we’ve ever seen before by big organizations.”

While she credits Valorant for noticing there’s a lot of women who want to compete and creating a safe space for them. It’s not the end goal. Rather the end goal is “just to have us all competing against each other.” Men and women in the same leagues, like at mixed qualifiers. “Eventually we’ll get there.” She says.

What are the differences between female-only and mixed tournaments?

“If you want to say that you are the best female team in the world, the only way to do that is to play against other female teams in the world.” Emmalee points out, “For instance, my team and I were able to say that we were the best female team in the world in CS:GO because we won back-to-back world championships at IEM Katowice Intel Challenge.” She explains. Before adding a tidbit about where Dignitas Female has their sights set next. “We want to do that in Valorant as well.”

Unlike traditional sports, esports doesn’t require as much physical input; meaning women have a more even playing field. Yet the scene is still perceived as dominated by male players. We asked Emmalee to share her thoughts about the space, and if she thinks it will change in the future.

“I don’t know if you’ve ever played a Valorant ranked game,” she says. “But every time I queue up, I almost always have another female on my team!” As Emmalee points out, that’s two out of five women on the team. “So, is it male-dominated?” She asks. Not quite from her perspective.

“I feel like it’s starting to become fifty-fifty… based on the fact that I’m queueing with a girl every time I play a ranked game.” She says. “And that’s really exciting to see because that’s something that my team and I really strived for.” She explains. “That is why we did panels and interviews, to encourage more girls to play.”

And as far as Emmalee can see, it’s been working.

“We have amazing streamers that are really good at Valorant, encouraging more and more girls to play.” And that’s alongside the tournaments Emmalee already brought up.

You can catch EMUHLEET and Dignitas Female at the Super Girl Gamer Pro Spring 2021 Championship this Saturday, June 12. Where they’ll take on three other great all-female teams in a race for the $5000 USD grand prize! Be sure to tune in on Twitch or Facebook Gaming. 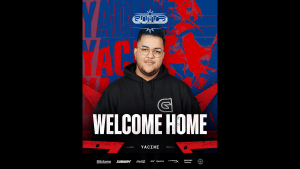