How To Be A Nurse And A Female Pro Gamer At The Same Time – An Interview With Emmalee “EMUHLEET” Garrido. 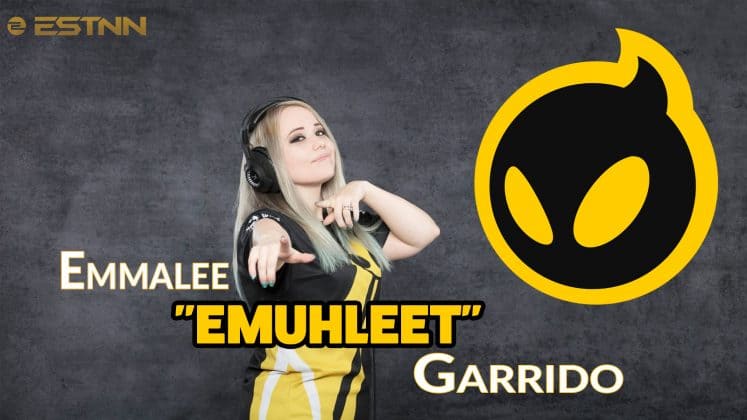 Emmalee “EMUHLEET” Garrido talks about passion and perseverance with ESTNN.

How do you balance a regular job until your career kicks off? We talked to Emmalee “EMUHLEET” Garrido about juggling the “real world” around esports, and how her and her team got their start in the scene.

Emmalee first got into games when she was, “really young,” thanks to her older brother. “We would play on an old Nintendo 64, and I am a huge James Bond fan, so my dad got us Goldeneye for the N64. That’s one of my first memories of playing videogames.”

But how did she get her start in the pro scene?

“I was going to local LAN tournaments here in Southern California since 2005 or 2006.” Emmalee explains. “I was playing in them and I started building a little team there.”
But it wasn’t until 2014 that her esports career really kicked off. Thanks to the Electronic Sports World Cup. One of the biggest CS:GO tournaments at the time. “It was held at Paris, France,” she says. “So of course, I wanted to go to this tournament! So, I made my team. Team Karma, which is still my team to this day.”

The Electronic Sports World Cup (ESWC) was the tournament that really helped Emmalee make a name for herself and Team Karma.
“We were the only team that went to this tournament with no financial sponsors, we had to spend thousands of our own dollars.” She explains. “Some of my teammates used college funds just to go to this tournament.”

Self-funding a trip to Paris shows plenty of commitment, which is exactly what Team Karma wanted to do.

From CS:GO to Valorant

When Riot first released their shooter, Valorant, Emmalee and her team weren’t playing it competitively.

“We didn’t really start playing Valorant when it first came out, maybe a little bit here and there.” She explains. “We were so focused on Counter-Strike at the time. There were still tournaments coming up like DreamHack, that we wanted to prepare for.”

“There are a lot of similarities between the games, but it has also been a really fun challenge.”

Now that the team have leapt into CS:GO, has she got a favorite Agent?

“I feel like it keeps changing.” She admits, “But I think my all-time favorite is Sage…” because I’m a nurse in real life and Sage heals people in the game.” Emmalee explains (with some laughter,) “So, I kind of feel like Sage is my little nurse in game, she’s me.”

Pursuing passion on the side

A nurse and a professional gamer?! We asked how she manages both careers.

“Right now, I’m only doing gaming.” She explains, “I’m not working full time anymore, but for four years I was doing them simultaneously.”

How did she juggle such a demanding job while finding success in the esports scene? Emmalee admits it’s a question people have asked her a lot.

“A lot of people have full-time jobs, and they also try to balance it with gaming.” She says. “I am always on a schedule; my calendar is my best friend.” Emmalee explains. “I have to schedule when I’m going to eat, when I’m going to take a shower, when I have practice, when I have work, times when I’ll be driving…”

It’s this schedule and organization she credits with keeping her sane. “It keeps me, well, organized!” She says. “Sometimes I would have to wake up at 4-5 AM to drive to Los Angeles – two-hour drive – to work my 7–8-hour nursing shift.” She says. “Another 2–3-hour drive back home and by that time I’m already late from practice…”

That was Emmalee’s schedule, five-days a week when she worked full time.

“But even though after work and driving and being up early, I wanted to play with my team so bad I just found this natural energy.” She says, “I was so passionate about wanting to be the best and competing.” And, she had some advice for other hopeful pros still struggling to find a balance. “For anyone that’s doing what I did back then, I definitely recommend getting a good calendar to help you be organized, they are really helpful.”

“Being the captain of my all-female team is such a blessing,” Emmalee tells us. “We have this incredibly tight bond with each other that we wouldn’t have if I was on a mixed team.” She explains, adding she and her teammates talk about their real-life personal problems together.

“I’ve been through breakups with my teammates, some of them were bridesmaids to my wedding.” She says.

And that tight bond outside of the game helps them play better together when it counts.

“I didn’t even dream that I’d have the team that I have today. I think that if I were to lead a male team, we could have a really strong bond as well, but just the fact that I’m on an all-women’s team and we work really hard and place well in tournaments is very satisfying to me. I wouldn’t change it for anything.”

All that hard work has paid off now. So, we asked Emmalee to share a few highlights from the road so far.

For Emmalee, one of the first memorable moments in her career was at ESWC in Paris.

“You had to make it to the Grand Finals in order to get onto stage.” She explains. “We really wanted to play on stage in our very first international tournament.”

And they did it. The team played so well, they made it to the Grand Finals.

“I will never forget this: the moment we were walking on that stage was kind of like in the movies where time just freezes,” Emmalee says. “That was a euphoric moment. I slowly looked to my left, and I saw my teammates, looked to my right and I saw our coach, and then looked out to the crowd where everyone was cheering under the lights. That was the moment when I knew this was something that I wanted to do for a very long time.”

The second moment came during the team’s last run at the IEM Katowice Intel Challenge.

“I was working as a nurse full time and also competed with my team. I didn’t have much time for anything else.” She explains. “When we won that tournament, I just burst into tears… I worked so hard, I lost so many hours of sleep just to prove that I was on one of the best teams. That is something that I’ll always remember, just crying after the victory.”

After proving themselves in CS:GO, winning multiple world championships, what’s next for Emmalee and Dignitas?

“One of my biggest goals with my team… I want to win all women’s championships in multiple game titles. That is my goal right now coming into Valorant.” Emmalee explains. But there are personal goals she has in mind for the future too.

Combining her passions together to help others in the scene is a noble cause. And with problems like pressure, stress and burnout all too common in the industry, Emmalee’s future personal goals sound like they’ll fill a much-needed gap.

All the work Emmalee’s put in with Dignitas female has helped the team’s star shine bright. We asked her to share some tips with other young aspiring gamers.

“I would say to anyone aspiring to be a professional gamer – especially girls – that there’s always going to be bumps in the road.” She says. “There will always be someone that’s going to try and block you from doing what you want to do.” Something she points out can happen outside of esports and in different career paths too. “Someone is going to try and push you down,” Emmalee says, “but you always need to get back up.”

And as someone who juggled a full-time nursing job with a budding esports career, Emmalee knows a lot about the importance of perseverance.

“People don’t realize that sometimes you can become your own enemy.” She says. “Always remind yourself why did you first start doing whatever you’re doing, why did you start following your passion.” She says. “You need to motivate yourself and remember that the most important person in the world for you is you! So always get back up when you’re pushed down.”

You can see EMUHLEET and Dignitas Female at the Super Girl Gamer Pro Spring 2021 Championship. Where they’ll take on three other great all-female teams in a race for the $5000 grand prize! Catch the action live on Twitch or Facebook Gaming.