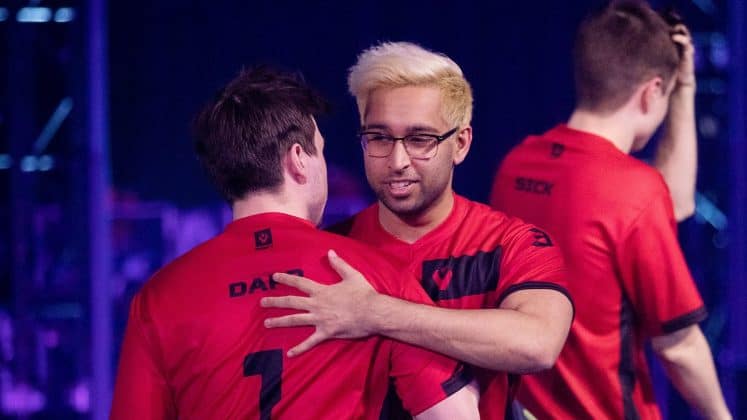 Valorant Masters Reykjavik Day 2 was the rise of North American supremacy and slated our first elimination matches of the tournament.

Things have been anything but calm at Masters Reykjavik. Both Sentinels and Version1 putting the smackdown on the EMEA regions which is what most fans have been waiting for. The trash talk between NA and EMEA has been consistent for about a month now. Global fans of Valorant wanted a definitive answer, who is the best region in the world. Regardless of how matches went though, teams still need to face off against Korea’s finest.

The opening match of Day 2 was focused on two players no matter who you cheered for. On the side of Vikings, Gustavo “Sacy” Rossi made his mark proving that you don’t need to be a duelist to top frag. On the other side, fan-favorite Patiphan “patiphan” Chaiwong tried his best to keep X10 afloat during the matches. Patiphan was the equalizer of the series, keeping things from going bad to worse for the Thailand team.

The question surrounding these two teams was who’s default is going to be better, and in a lot of ways, Team Vikings managed to keep a steady economical lead on X10 in both maps. On Ascent, X10 was able to chain together four back-to-back round wins to take it to OT for the chance of a Map 3. The Vikings were having none of this and shut them out completely, sending X10 to the lower bracket to face elimination.

This match was quite possibly the best Valorant we have had this week so far. Version1 and Team Liquid kicked off Split with an unforgiving back and forth. For the most part, Team Liquid consistently outplayed Version1, but the NA team kept it close up until the half. Liquid does exceptionally well at dominating on pistol rounds and using force buys to keep their opposition at a disadvantage. The defense from V1 on Split kicked things up to level 11, wiping the floor with Europe’s prized team. Down 5-10, Version1 finally woke up and chained together seven straight round wins to take the map to overtime. If there is one takeaway from this map, it’s that Erik “penny” Penny is an uncontested Op god who has no fear.

Between the anti-tilt tactical pauses and slow-paced brawls, Ascent was a pacing change. Team Liquid was fine taking their time, but it played to the advantage of Version1. It was all but too easy for V1 to pick up a kill before the spike plant and play passively until it was time to retake. Haven was where V1 thrived, taking out their pent-up aggression on the psyche of Team Liquid. There were questions as to where Version1 would end up compared to teams of other regions. So far, they have only proved that they belong in Masters.

North America's top seed had all eyes on them this match and expectations were high. Map 1, Icebox, began with FNATIC coming out swinging only for Sentinels to match their pace by Round 5. Almost every round was a back and forth battle swinging in favor after initial pick-offs. Even for Icebox being so attack-sided, Sentinels held their own and kept a foot on the throat of FNATIC. Shahzeb “ShahZaM” Khan was back in true form on Jett with the Op, taking angles that made it impossible for FANATIC to check angles comfortably. After swapping sides, Sentinels went after FNATIC like rabid dogs, putting up multiple round wins off the bat. FNATIC steadily won rounds, always keeping themselves in it, but not doing enough to win.

Icebox was a visible display of how little regard the Sentinels have for other teams, regardless of region. Haven showcased the hunter style of Sentinels, using early aggression to gain a kill or two and tilt the odds in their favor. Sentinels had no fear of FNATIC, playing to their strengths and applying pressure at all times. Previously, Jake “Boaster” Howlett had stated that he thought Astra was overrated, yet FNATIC chose her over Brimstone in this match. Their opinion on Astra was reflected in the obvious skill gap between Boaster and Jared “zombs” Gitlin on this recent addition to the game.

For Day 3, two teams are slated to go home from the Lower Bracket and two teams will continue to fight for their lives. The first elimination match will be X10 Esports versus Crazy Raccoon, and the second will be Sharks Esports versus KRU Esports. Make sure to follow us on Twitter for all the latest Valorant news, highlights, and exclusive interviews.