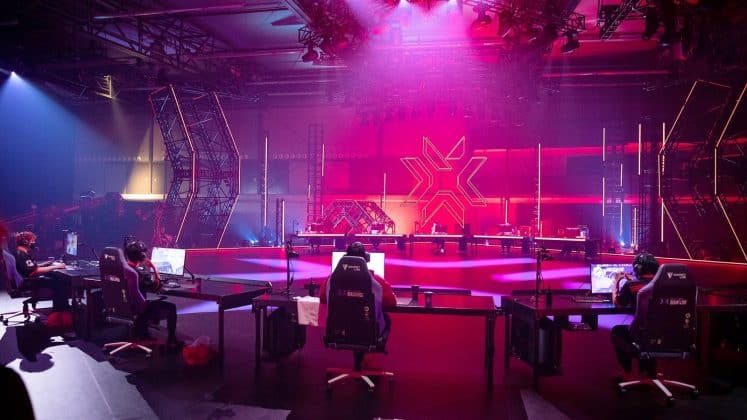 Valorant’s first-ever International LAN tournament is officially underway, kicking off on Monday, May 24th. The first day of play included three absolute heaters. Beginning with FNATIC versus KRU Esports, followed up by Version1 versus Crazy Raccoon, and ending the day was a three-map series between NUTURN and YNG Sharks Esports. For so long fans have dreamed of an official LAN event, and despite a few technical difficulties, Masters has delivered so far.

The first match of Masters Reykjavik was two EMEA teams going head to head. FNATIC was predicted to take the win and they did just that. KRU Esports opted to play without a duelist on Map 1, and the hope was they would have an easier time managing the pushes of FNATIC. Haven was uncontested aggression from Nikita “Derke” Sirmitev, making it impossible for KRU to chain together round wins. Haven ended up with a 13-5 win for FNATIC, and Icebox didn’t fare any better for KRU Esports. One of the most obvious takeaways from this match was the lack of confidence from KRU in managing a team like FNATIC. Flanks went uncontested against KRU and Martin “Magnum” Peňkov was able to shut them down consistently. As anyone would expect the real show was simply Jake “Boaster” Howlett being himself and being entertaining as always during the technical pauses.

The second match of the day began with what can only be described as insanity. The dark horse of the tournament showed up in a massive way against the North American Version1. Early on Version1 seemed to have everything under control, but before long the match devolved into chaos. Byeon “Munchkin” Sang-beom’s instincts kicked in, and Crazy Raccoon was able to pull back crucial rounds to break the economy of V1. On Ascent, each round was closer than the next, and the shining star for V1 overall was Jordan “Zellsis” Montemurro’s Phoenix play. Even carrying on into Icebox, he used the fairly selfish agent to create opportunity for his team. Unfortunately, there was a 35-minute technical pause early into Icebox, but Version1 carried on without missing a beat.

It wouldn’t be a complete day of competitive Valorant without a three-map series and this one delivered. Everyone expected NUTURN to win this with ease and the pressure was on for the team. There has been a lot of controversy over NUTURN heading to Iceland instead of Vision Strikers to represent the Korea region. Regardless of the critics, NUTURN proved they deserved to compete on the global stage.

Map one was heavily momentum-based from YNG Sharks, using chaotic team fights to force uncomfortable pacing. They had the timing down to a tea and closed out the map with a commendable 13-5. Bind turned everything on its head and NUTURN came alive in a way that dismantled any hope that YNG Sharks had of a victory. Once the sixth flawless victory came through for NUTURN on Ascent, the match was pretty much over. After the half, YNG Sharks was able to secure a few round wins, only to be manhandled by Kim “Lakia” Jong-min.

MORE FROM ESTNN
Zellsis Is Now A Restricted Free Agent

Going into Day 2, there will be three more matches; Team Vikings versus X10 Esports, Team Liquid versus Version1, and Sentinels versus FNATIC. The first round of eliminations takes place on May 26. And already YNG Shark Esports, KRU Esports, and Crazy Raccoon are on the chopping block. The broadcast already surpassed 500,000 peak viewers between all of the official streams. With Valorant dominating Twitch for the majority of the day.

Make sure to follow us on Twitter for all the latest Valorant news, highlights, and exclusive interviews.