This is everything going on with the latest crossover, PUBG Mobile X Polaris.

PUBG Mobile is getting its next big collaboration, PUBG Mobile X Polaris. This new crossover is following on from their Bruce Lee event and World Cup Blowout before it. The new event isn’t just about selling skins though, we’re getting an entirely new batch of content in-game including brand-new vehicles.

Polaris is one of the biggest manufacturers of specialist vehicles, including RZRs. It’s this part of the company’s offerings that’s getting a feature in PUBG! We can expect some exciting new vehicles to take the place of the buggy in-game. There’s also a sweepstakes being run by PUBG to celebrate the crossover too. This is what you can expect in the new PUBG Mobile X Polaris Crossover.

This newest crossover is going to be bringing licensed vehicles into the World of PUBG Mobile. There aren’t new skins. Or a new game mode. Although, it would be pretty difficult to get skins out of an off-road vehicle manufacturer! However, you can track down these cars to give you a taste of what the real-world vehicles are like in-game. This is what the crossover is going to mean for players and what new content is hitting the game. 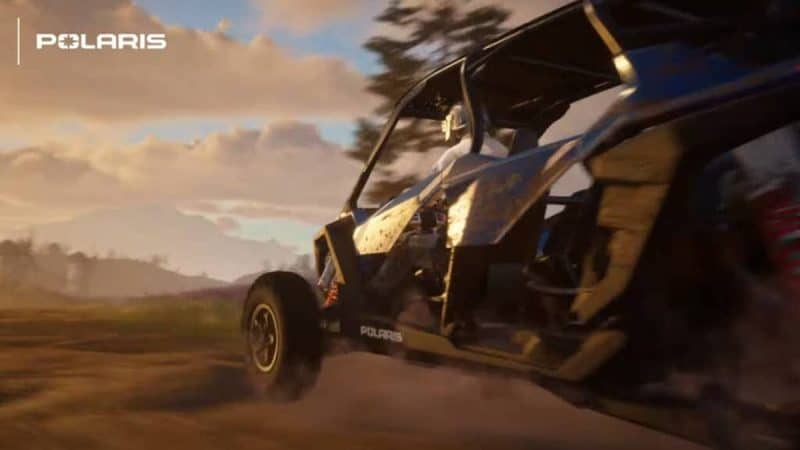 PUBG Mobile x Polaris is the latest event to hit the game. This time PUBG is crossing over one of the most well-known names in racing. Polaris is a maker of SxS vehicles. It’s these vehicles that are getting pulled into PUBG Mobile and translated over to the game’s distinctive buggys.

The crossover is being hosted to tie in with the release of new vehicles from Polaris itself. A new vehicle will be added into the game. This is a Polaris-inspired Buggy. It’s going to be unlockable in game in two different varieties, Blue Strike and Desert Blast. The Buggy is going to be set up to provide both rotation and protection in game.

The Buggys have off-road tires to let players utilise them all over the diverse terrain here. You don’t have to stick to the roads with these vehicles. The two variants each have different designs, so you can mix and match! With so many different styles, you can even try to them all match up with your skins.

This isn’t a huge event that’s taking over the game. However, we’re only going to see these new vehicles in the game for a limited amount of time. It’s a new twist on a vehicle that’s been a part of PUBG for quite a while. Another area where the mobile version of the game is pushing things forward faster.

The PUBG Mobile X Polaris buggys are fairly open in design, with no protection from incoming fire where there would normally be glass. However, with the off-road tires and bumpy ride, enemies are going to have a hard time tracking exposed players. It’s going to be pretty difficult to snipe anyone sat in one of these.

The two vehicles in-game are built to resemble the Polaris RZR Pro R 4 and Polaris RZR Turbo R 4. It’s a bit of a strange collaboration for a battle Royale. However, it’s always fun to see real-world stuff like cars show up in the game.

These Polaris Buggys look set to replace the normal Buggys in-game for a little while. Players can track them down across maps, but probably more common in areas where you’ll normally find Buggys. They’ll handle similarly to the normal ones. Although, having a more off-road optimized experience is going to make a difference for gameplay.

The PUBG Mobile X Polaris crossover might be the first some Battle Royale fans have heard of the brand. It’s a very specific niche that’s getting appealed to here! Polaris is a pretty well-known manufacturer of a few types of vehicles though.

They’re best known for making things like RZRs (which this crossover is centred around. But also snowmobiles, ATVs, and Motorcycles. Their vehicles are built for more adventurous off-road driving. This makes them perfect for a game like PUBG. These are vehicles are going to work very well in the bumpy world of PUBG.

Alongside the PUBG Mobile X Polaris crossover, there’s going to be an Adventure Sweepstakes held to celebrate the event. Players can enter the competition to try and win a Polaris Adventure, a day out driving actual Polaris vehicles. This competition is strictly limited to people who are in the US though.

To celebrate the crossover, a Polaris Vice President said of crossover “Polaris has been engineering best-in-class off-road vehicles for more than 65 years – and we’re not slowing down. Whether sand, snow, dirt or now the virtual world of PUBG Mobile, our machines provide the ultimate combination of style and performance. We are excited to introduce our vehicles to new audiences and can’t wait to see how players use the Polaris RZR in-game models to dominate the competition on the battleground!”. The Sweepstakes is going to be another part of this crossover.

This isn’t the first PUBG game to get licensed vehicles. Previously, PUBG New State had a licensed crossover with an electric car, adding them into the game. This is a first for PUBG Mobile though!

When Does the Collaboration End?

The PUBG Mobile X Polaris crossover is available in-game already. It’s running for a good few weeks too, taking place until February 14. This is going to be long enough for most players to get a hands-on with the new version of the Buggy. Don’t get too attached though, it’s only a few weeks before the new Buggy leaves the game!

While we’re still building up to the next PMGC, this buggy is going to feature in some PUBG Mobile competitive events. The ESL SPS is currently running and will end before the Buggy leaves the game. Since it's fairly close to the other Buggy, it probably won’t mean the biggest changes to the game’s balance! Keep an eye out if you’re watching streams of the tournament though, you might spot this crossover vehicle.