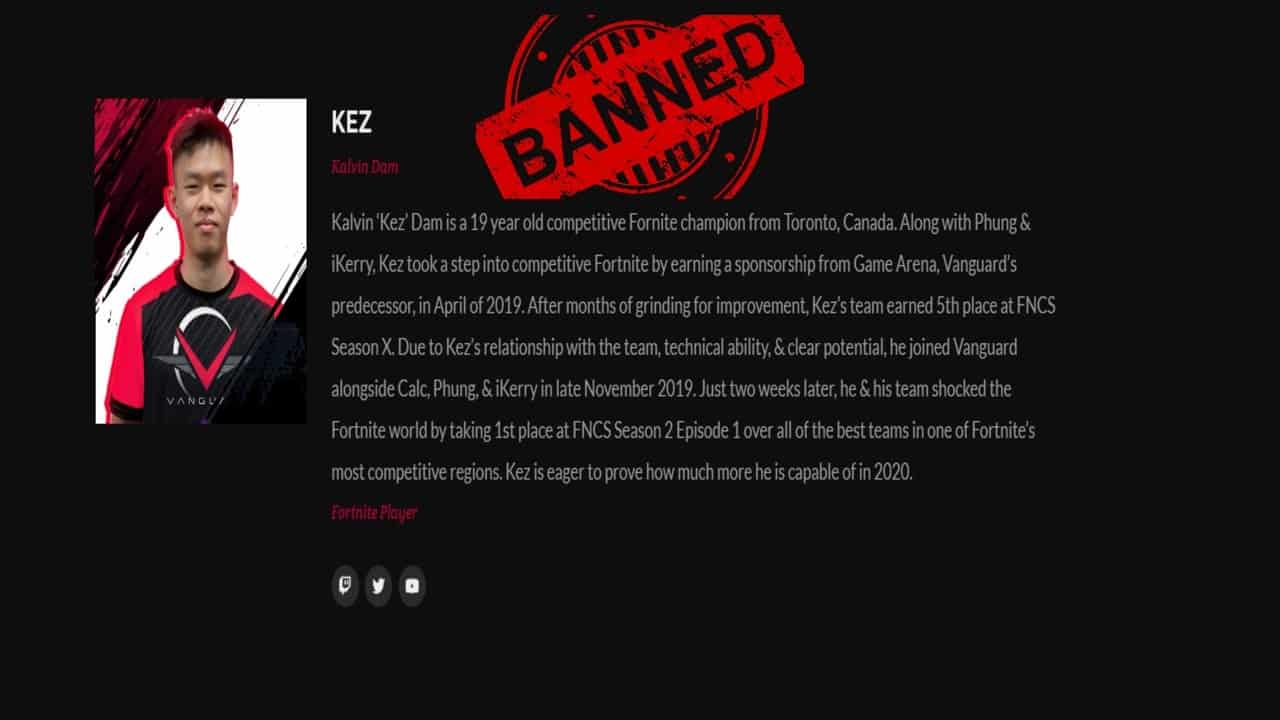 A former FNCS champion has been banned from Fortnite for cheating.

Fortnite Champion Series (FNCS) Chapter 2 - Season 1 Champion, known as KEZ, was struck with the ban hammer during Fortnite’s winter-theme Frosty Frenzy tournament. At the time, KEZ was competing in the trio tournament with teammates Ghost nanolite and cizlucky. The two players witnessed KEZ exit the game, and both quickly recognized why he left. Making the situation even stranger, the professional player deactivated his Twitter shortly after a viral clip began circulating the internet. Several professional Fortnite players and personalities could not fathom the situation as it unfolded.

Doesn't look good that he didn't say anything to his teammates after being struck by ban hammer? pic.twitter.com/c0S1MXv6DK

Fortnite commentator AussieAntics clipped a portion of nanolite’s stream while the situation played out. The three players were merely rotating and looting. “What the f**?” asked nanolite, in disbelief after watching his teammate receive a ban. KEZ, who won Fortnite’s flagship FNCS tournament just four seasons ago, then disappeared off social media, including both Twitter and Instagram. KEZ’s YouTube channel remains intact, where he lasted posted a week ago.

Proof of Kez buying softaim. DM i got Dec 4 but didn't believe at the time pic.twitter.com/fH6AV60mc1

Former professional player Beehive received proof of KEZ purchasing soft-aim cheats straight from the provider, known as TankedGG. The former Fortnite champion allegedly attempted to chargeback the $400 hack, which resulted in all of the details leaking. The PayPal purchase receipt seems convincing, considering the presence of KEZ’s full name - Kalvin Dam - and his business email. The cheat provider directly messaged CizLucky on December 5, informing him of the situation. However, CizLucky did not believe his claims held any merit.

Nanolite and CizLucky competed with KEZ for 15 hours today. Both players took to Twitter, stating that they would not receive any of their earnings from Frosty Frenzy. Those winnings included $1.8K USD from the early session on day two. It is unclear who else this situation may affect, considering KEZ’s major championship victory in Chapter 2 - Season 1. That team featured Dominik “UnknownArmy” Green, StableRonaldo of NRG and Avery of Cloud9.

KEZ’s former duo partner Sebby confirmed that he did not cheat until this season. Since KEZ erased himself from social media, we may never learn the real reason or length of his ban. Epic Games enforces strict punishments on players who utilize third-party cheats but never publicly acknowledges player bans. They did the same in Chapter 2 - Season 3, when a soft-aim hacker reached the final round of an FNCS Qualifier. KEZ was last a member of the Vanguard esports organization and recently picked up Fortnite again in Chapter 2 - Season 4.

Stay tuned to ESTNN for more on this developing story.