This month brought a new season of Fortnite and an entirely new meta for players to learn. Gone are the days of the Kit’s Mythic Shockwave Launcher and Charge Shotgun. Now, players have Marvel superpowers to harness and use to their advantage. With another piece of $250K USD on the line, let’s see which NA West Grand Finalist earned September’s DreamHack Online Open Championship.

Free-agent controller player Alliege bested all 99 of his opponents in the NA West DreamHack Grand Finals. He broke the 300 point threshold, earning 305 across the final six tournament matches. Despite not completing a Victory Royale, Alliege’s four top-15 finishes and 17 eliminations won him the tournament. He and July DreamHack winner 100T Arkhramn jockeyed for position on the leaderboard, but Alliege’s final match produced enough points to win the competition. The 15-year-old free agent added $4K USD to his career Fortnite earnings.

5G Nach finished in second place with 287 points. Nach took first place in the penultimate match and subsequently completed a five-elimination fifth-place finish in the final game. His match six effort yielded enough to points to vault him over Arkhram on the leaderboard, thus earning him $2K USD. Although he led for much of the tournament, Arkhram’s fifth tournament match proved his downfall as he managed zero points. Nonetheless, Arkhram continues to showcase his skill at the highest level of NA West Fortnite and snagged $1.8K USD.

Some other notable NA West names atop the leaderboard include criizux, EP wavy, TurtleTavern, Lanjok and Reet. Several top NA East players like FaZe Dubs, TL Cented, OA Whofishy and Acorn found themselves inside the top-15. See where all the finalists finished on the leaderboard below. 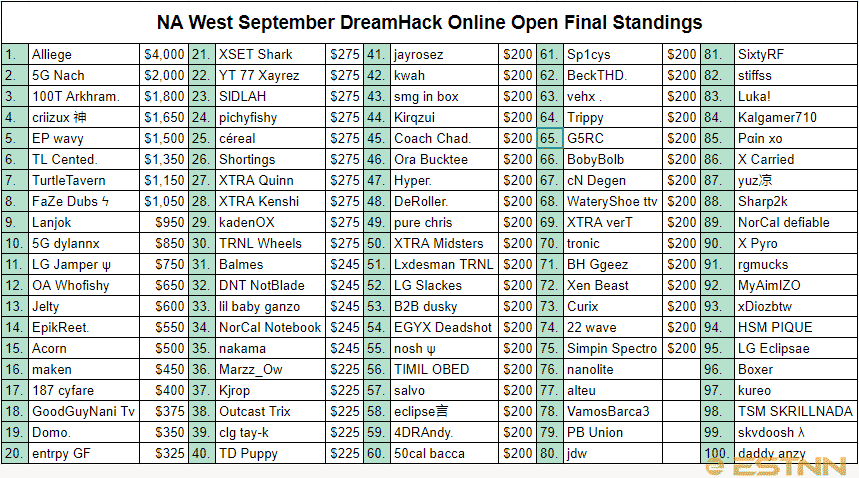 Toward the end of the broadcast, DreamHack managed to contact Alliege for an interview. The 15-year-old explained that his Retail Row drop worked in his favor as he played primarily for placement points. Alliege also struggled through playing on 60 ping and closed out the tournament regardless. See the full interview with SanchoWest, MonsterDFace and HelloKittyLink below:

Congrats to Alliege for his victory and all of the NA West Grand Finalists. The DreamHack competition rolls on this Thursday for the NA East portion.

Stay tuned to ESTNN for updates and results later this week!