Renegades' Stephen “Berghy” Bergh took the time to speak with us after defeating Cloud9 Blue and qualifying for the First Strike North American Regional Finals. He talks about everything from joining Renegades to what made him fall in love with Valorant and even going up against TSM at First Strike.

What was your first introduction to Valorant?

I saw my old teammate Brand “Ace” Winn playing it on stream, and Riot Counter-Strike had been a rumor in the CS community for five years. I popped into his stream and a few minutes later I got a key. I tried it when I got home and after that everyone was hitting me up like, ‘Hey, you want to join a team?’, I said yup and now we are here.

What made you get competitive about playing Valorant?

It is the same tactical shooter, 5v5 that I fell in love with CS, except shiny and new. I liked the agents a lot from the start, and I like the whole dynamic of everyone having a different role and how they are defined.

How do you feel about the evolution of the game so far?

It’s changed into something I definitely wouldn’t have thought of a few months ago. The way everyone plays the game is so different and we are finally starting to see teams develop their styles as opposed to everyone playing what used to be the right way. A lot of teams are playing different comps as more agents come out and as more maps are added the strategies will change.

How do you feel about Skye and Icebox being available for play at the Regional Finals?

I think they did it right. They have been around for quite some time now, we’ve all had time to prepare and play around with them. The whole separate patch line for the Playoffs was nice but I’m excited, I like new stuff.

You play a lot of Omen, what is it about that agent that you enjoy so much?

Just being the in-game leader, I kind of take a back seat to everyone else for what they want to play. I just ended up on Omen, I like him, you see teams like us and Cloud9 who put the IGL on Omen with the smokes so IGL doesn’t have to call smokes, he can just do it. Then you have TSM and the other guys who put IGL on the Sova or something like that, and we tried Cypher but it didn’t work out for us. Myself on Omen made a lot of sense for how the team developed, I like him now I’m getting used to it.

How did you settle into your role of IGL?

I feel confident as IGL now, but I made mistakes on how to prepare and how to play the game leading up to our tournament. A switch kind of flipped after that and I changed how I see the game and I went away from being a CS IGL and developed my own Valorant style.

What has your tournament experience been like so far this year?

It was kind of crazy, you go on VLR and we’ve got a match against Cloud9 and I just think alright well that’s me. As far as prep for the matches went, we’ve all done this a long time so it was just like any other match, but it was cool to play against all the big teams. We play TSM on the 3rd and that’s huge, it’s TSM. If you look at our past with TSM when they were 2-0’ing everyone we were the only ones taking maps off of them. We kind of had a dip in performance but after the qualifiers, everyone on the team feels like we can beat anyone it just depends on who prepares better. It’s one Best of 3, so you have to show up and perform if you want it.

How do you feel about your guys’ performance at the Nerd St. Gamers Closed Qualifiers?

As soon as we got our group, we figured if we got out of the Group Stage we would be okay. We put everything into preparing for Cloud9 and it was crazy, we came out and did the Renegades thing of knocking down the door and they didn’t have an answer. You should have heard the comms after the game, we couldn’t believe we beat Cloud9 and we were just excited to have gotten that far.

What does it say about the professional Valorant scene that we won’t see the likes of Cloud9 and GenG at the First Strike Regional Finals?

There are so many organizations in the North American Valorant scene and there were always going to be big-name orgs who didn’t make it to First Strike. You could almost think of the Closed Qualifiers as Group Stages for this event in a way. The First Strike main event is only the top eight teams and it’s disappointing to not see Cloud9 but I’m sure they will bounce back.

// No VAL_files this week BUT check out this clip from our @BerghyFPS interview going live this week.

How do you feel you have evolved as a player?

It’s been nothing but up so far this year, even though I wasn’t full time for a while. We signed in June, and with the support, I was able to go full time in September and I’ve been treating it as a professional since then. I’ve mostly been waking up a little bit earlier, practicing IGL things, playing more, things like that. It’s like night and day from where I was in the summer in terms of IGL and player. I think the team feels that way as well, we are a completely different team now so just the mindset switch of how we play the game was the big thing for us.

What are some goals you and the rest of the Renegades squad set for yourself this year and next?

Even from the beginning, before we were signed, our goal as a team was if we can solidify ourselves as top four in NA, every international event we will probably be at. That’s always been the goal, to stay in the top four and make the international events. We really want to win First Strike, but if we make the top 4 it is a job well done.

Renegades is facing off against TSM in their opening match of the First Strike NA Regional Qualifiers. 2020 was a big year for competitive Valorant, but Renegades had an opening year that is worthy of praise. They went from competing in B-tier tournaments to taking on the big dogs and eventually defeating Cloud9. Make sure to go follow Berghy on Twitter and Twitch and for all the latest Valorant news, @EsportsValorant has you covered on Twitter. 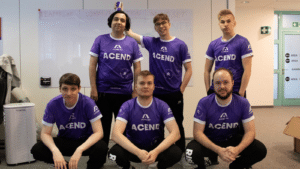