Keven “AZK” Larivière has a long history in competitive gaming, reaching all the way back to 2004. He is no stranger to first-person tactical shooters with over 10 years of professional Counter-Strike experience. The top-tier competitor played Overwatch for a short period before settling into the professional Valorant scene. AZK joined a stacked T1 squad that was predicted to be one of the strongest teams in Valorant. ESTNN was lucky enough to sit down with him and discuss his journey in esports and his future with T1 and Valorant.

You've competed in CS: GO and Overwatch professionally, and now you are with T1 playing Valorant. Looking back on your career, what would you say were some of the most memorable moments?

I have a lot of good moments from my Counter-Strike career, mainly CS: GO and CS Source. I played Source from 2004-2012 and we won 10 ESEA LAN titles. A lot of my better memories are from that time, actually. I really enjoyed playing on team Dynamic, it was a very fun team to be on and always had a positive atmosphere for a long time. In CS: GO with iBuyPower I had lots of good memories but some bad too, lots of ups and downs. There were a lot of good memories. However, we won two ESEA LANs, and we reached our goals at least in North America. Overwatch I had fewer memories but I played for much less time than CS.

From your time playing Counter-Strike, what are some skills you believe give you the edge over your competition?

In CS, when it comes to rotations and executing strategies I learned a lot for sure. If you reach a high level in CS you are set for every other game. It is such a complex game and there are so many things you have to do and to be aware of as you are playing. Some of the things like attacking a bomb site, how to retake a bomb site, how to play around a bomb or objective, so many things I learned in CS years ago. Overwatch is pretty different though.

What are some skills you learned in Overwatch that carried over to Valorant?

Tracking ultimates and understanding the meta when it comes to agents are the big things. With every patch, the meta changes you have to adapt. In CS there are no agents, so coming from Overwatch you understand how to adapt as the game evolves and refine compositions. Overwatch helped me at tracking ultimates and understanding ability use. Really just getting the most out of abilities because at the beginning of Valorant I saw a lot of CS players not using their abilities correctly, if at all. But when you look at Overwatch players they use their abilities really well.

What made you choose Valorant as the title for your entrance back into competitive gaming?

For me, Valorant felt like a natural step moving forward. I feel like it is the perfect game for me coming from Counter-Strike and Overwatch. Valorant is a mix of the two games in a sense, closer to CS for sure, but still some elements of Overwatch here and there. The first time I played Valorant, I felt like the game was made for me honestly. When it comes to playing professionally I have the experience and that is what I really went for and I don't regret anything. I really enjoy this game and I enjoy all the aspects of it.

I've heard a lot of professional players say that they feel as though Valorant is meant for them. Is there anything in particular that makes you feel this way or is it the general blend of Counter-Strike and Overwatch that gives a fresh breath to the game?

I played CS for a long time. Then I played OW. And when I played Val, like you said, it's the perfect blend of two games. So for me, the game felt natural right away.

From Team Brax to T1

How was the transition, going from competing under “Team Brax” to being an official T1 Valorant roster?

Before when we were just Team Brax, we were still building our team and we didn't have a set lineup in mind. We were still trying to get our pieces together and we weren't really sure which direction we were going yet in terms of players. In the beginning, it was just about getting experience and getting used to the game while also seeing who is playing at the highest level right now. There were fewer expectations back then. It was a little less stressful, but once we got our team together and joined T1 it changed.

There are more expectations now obviously, but I like how we took our time and weren't forced to do everything fast. We slowly chose our players and I feel like that was the right move to do. Going forward representing T1, expectations are set. Now, we are just trying to work every day to accomplish our objectives.

What was the mentality going into the T1 x Nerd Street Gamers Showdown as a full T1 for one of the first times?

That tourney was our first big official tournament. We definitely practiced very hard and would have liked to finish for sure, but props to TSM for their plays. Going in our expectations were to get first and we practiced to get first and unfortunately, we got second. We learned a lot from that event and there are a lot of takeaways there. All those mistakes that we made were something that we addressed going forward.

How do you both feel about the current structure of tournaments between the Ignition Series sponsored tournaments and third-party tournaments?

The Pax event was interesting because it wasn't like T1 x Nerd Street where it was only 2-3 days. The Pax event was more laid out and had more time scheduled for matches. Personally, I enjoy that structure because it felt like we had time to practice for every match, and time to read up on our opponents and see, “Okay this is what they do on this map, this is how they react to this”. We had more time to prepare and I enjoyed that. The first two days were only group stages and it was all BO3 which I think is really good. Honestly speaking, in Valorant Best of 1's are iffy. In Counter-Strike they are scary, but in Valorant they are scarier because there are fewer rounds.

As you said, we didn't know too much about them. When talking about other teams we had a much better understanding and Homeless is pretty fresh. We tried to look up stuff on them but most of our information came from the group stages. We didn't know too much how they were going to play, and they had a really good understanding of how we played. I think it's on us to make sure we keep updating our stuff because we did run a lot of similar strats from the last tournament which I think really bit us. I think if we mixed up our gameplay and came up with new strategies, that would have been ideal. We didn't know too much about them, but they played well and definitely surprised us for sure.

Going forward, what is the training mentality for T1 as a whole?

The training mentality as a whole is that we want to make sure everyone is giving 100% during practice and outside of practice too. But also, if we win a tournament we want to make sure we are staying innovative and ahead of the meta. We don't want to be running the same strategies as the last event even if it worked. We want to keep innovating because there are people who are studying us and we want to make sure we keep inventing and creating new ideas. I think that will help us a lot moving forward. And honestly, we are our own worst enemy in that sense.

What do you think are some of your strengths as a squad?

I think some of our strengths are that everyone is very very experienced on the team. When it comes to mid-round and late-round decisions I think everyone knows what to do. Right now the main focal point for us is that early-round we are set up and comfortable in our positioning throughout the round. As long as we don't brute force our hand and take our time and are more methodical, we will come out on top. Everyone has so much experience and if we aren't forcing plays, that is when our players can use their experience to finish up the round.

Despite a loss in the Quarterfinals of the PaxArena Valorant Invitational, T1 and AZK have a bright future. The team put on a masterclass at their breakout T1 x Nerd Street Invitational series claiming second place against TSM. The squad currently has no upcoming tournaments scheduled. But they can be expected to show up with a bag of tricks at the next competition. 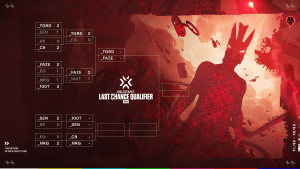