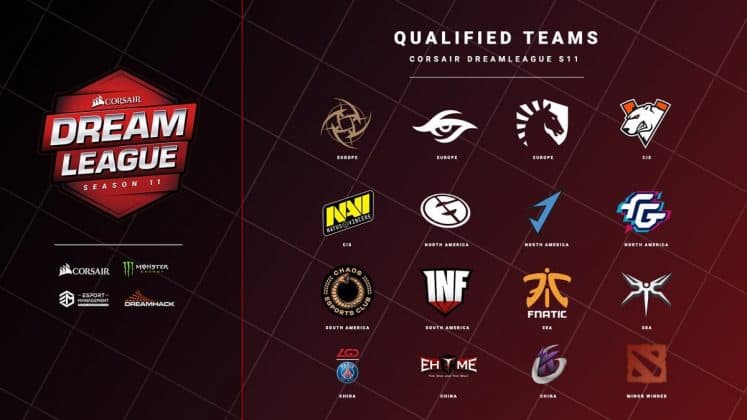 The North American qualifiers were interesting, largely in part thanks to teams still playing around the new meta in patch 7.21. The end results, however, were unsurprising. The same three teams that qualified during last year’s season securing a place again for this year’s Stockholm Major.

Evil Geniuses, J.Storm and Forward Gaming rose to the challenge and performed with plenty of grit and skill to take the three available spots.

Across all brackets, we saw some innovative playing and sometimes puzzling choices. Let’s take a look at some of the highlights from the past week of Dota 2.

In the Playoffs, they faced J.Storm in an exciting 2-0 series, with game 1 dragging out to almost 64 minutes, with the J.Storm leading in net worth, but Penguins leading in kills until the last minutes of the game.

But Game 2 was a stomp, ending in 35 minutes in J.Storm’s favour. Flying Penguins were knocked down to the lower bracket, where they lost in round 2 against Complexity Gaming. Despite a strong start to the competition, EE’s new team were unable to climb their way back to land themselves a spot at the Major.

Gunnar’s Puck in game 2 suffered under the harassment of Bryle’s Timbersaw in the mid lane and perhaps wasn’t the best pick for Flying Penguins draft. The constant harassment throughout the laning phase and an early kill on EE’s spectre caused him to suffer for farm. The Penguins were unable to prevent J.Storm from pushing and gaining mega creeps by 30 minutes. After a securing a 30 minute Roshan, and an aegis on Fear, J.Storm took the game at the thirty-five-minute mark.

With this loss, many fans are speculating it could mean Flying Penguin’s won’t gain enough points this season to earn themselves an invite to TI9 later this year. Which could make TI9 the first International without EternaLEnVy.

After taking home 3rd place at TI8, and again during the Chongqing Major, Arteezy and the boys in blue pulled out the stops in their upper bracket series, beating Forward Gaming in the playoffs to be one of the first teams to qualify together with J.Storm.

After a shaky start, losing to Forward in the first game of the series, EG turned the tables in Game 2 with Arteezy’s Arc Warden dominating the net worth, earning a mammoth 759 gold per minute. The team played a tight match, with SumaiL proving his worth in mid and providing excellent support to the team overall with Puck.

It’s worth contrasting the performance of SumaiL’s Puck with that of Gunnar’s, as it highlights how much further SumaiL has developed as a player since moving into offlane roles. The knowledge he’s gained about the strategies and synergies between heroes and positions was obvious in this second game.

Game 3 opened strong for EG, Arteezy got free farm against UniVeRsE's Omniknight in the laning phase, which meant despite Forward taking first blood, and leading in the early kills, Evil Geniuses wrapped up the final game of the series in under 40 minutes, playing to the new meta superbly, with beautiful rotations.

A thrilling comeback from Forward Gaming

Their first match up against TEAM TEAM saw them take the series 2-0. Dominating kills and net worth throughout and ending both games in under 35 minutes.

Their final series in lower bracket 3 saw them meet Complexity Gaming once more for another series of two. Forward beat CoL in both games of the series when they faced off in the group stages.

CoL had performed well in their earlier bracket match against up of the day against Flying Penguins. But Forward kept the pace aggressive from the outset of the series.

After taking out the first game, game 2 was over in just 26 minutes and 30 seconds, as CompLexity were unable to counter the swift and well-executed control that Forward brought to the map. Forward racked up an impressive 35 kills against CompLexity during game 2, 18 of those going to Resolut1on’s Lifestealer. Both Resolut1on and YawaR dominated the net worth this game, with 15k. Almost a full 5k over Deth’s Brewmaster, which only reached 9.9.

UNiVeRsE did particularly well in this series, amassing 43 assists over both games, providing a helping hand that would lead his team to victory. Again, we saw Forward manage to outplay the boys from coL, taking their rematch 2-0.

After a week of exciting Dota 2, the DreamLeague Qualifiers have now come to an end.

There is still 1 final spot remaining in the Stockholm Major. Teams from CIS, China, EU, and NA will battle it out again in the StarLadder IMBATV Dota 2 Minor, starting March 7th.

Some NA teams have already been confirmed, including Team Team, CompLexity and Flying Penguin. Will EternaLEnVy’s new team secure themselves a spot in the Major, and make it to TI? Or could we see CompLexity Gaming representing North America at the Stockholm Major instead?

Stay tuned for more announcements about which teams we can expect to see fighting for that final spot.

Videos via DreamLeague and Beyond the Summit on Twitch, and skmahadi and Nyunda TV on YouTube.