Vici and Nigma are one step closer to becoming the legend in Kyiv!

If you’ve been following the Wild Card stage at the WePlay AniMajor, you’ll know there’s been plenty of surprises from our six teams.

We take you through some of the biggest moments in Kyiv so far.

One of our most exciting first-day series saw Vici and Secret lock heads in our longest game of the Wild Cards. Secret held the lead out of the laning phase, but Vici Gaming were stubborn as anything. Refusing to yield to Secret’s offense and pushing the game out to over an hour.

This game was full of top-tier plays and impressive dukes. The 24-minute mark saw some beautiful back and forth fighting in the river near top lane, with Vici finally felling Lasse "MATUMBAMAN" Urpalainen’s Wraith King after almost a minute of trading blows. But leaving themselves open for the rest of Secret to sweep in and clean things up.

Another highlight came at the 31-minute mark after Secret had taken their second Rosh. Vici swept in on an unsuspecting Puck (Michał “Nisha” Jankowski) to take an easy kill. Although Secret came to bat for Nisha, a peerless Chronosphere from Yang "poyoyo" Shaohan’s Faceless void meant this skirmish had Vici’s name all over it.

Invictus Gaming and AS Monaco Gambit closed out our Wild Card matches on Stream B with a 1-1 draw that saw iG come back in Game 2. ASM.GMB delivered a commanding defeat to the Chinese team on the first map, with stand-in Artem “Lorenof” Melnick putting on a show on his Puck, going 9/1/14 over the games 32-minutes.

But Invictus Gaming were not prepared to taste defeat a second time. They took Storm Spirit for Zhou “Emo” Yi, with Thiay “JT-” Jun Wen on Mars and a Morphling for Jin “FlyFly” Zhiyi in Game 2. The greedy line-up could have been a boon for ASM.GMB. But it worked well for iG, and their cores quickly ballooned out to a dominating net worth. JT- went 4/0/10 on Mars this map. FlyFly also proved to be an unbreakable barrier for the boys from CIS. He went 8/0/2 in this snowball stomp. ASM.GMB called GG after 18-minutes of slaughter.

AS Monaco Gambit may not have made it through to the Major’s next stage, but they gave us plenty of top-tier Dota to enjoy. Especially considering they were two members short of their qualifying squad. They showed plenty of resilience and their stand-ins did an admirable job developing synergy with the rest of the team in such a short time. We’re definitely looking forward to seeing them in action again with their complete roster soon.

With the draw under their belt, Invictus Gaming then went on to smash Team Secret 2-0 after this series. Forcing a Wild Card tiebreaker to wrap up our Day 2 action.

Team Nigma have put on an impressive performance through the Wild Card stage. Ending the round-robin with a final count of 2-2-1.  Their much-anticipated series against Team Secret on Day 2 was upset by server issues on the Valve side, and they came out in the end with a 1-1. But when iG took down Secret with two swift wins, Nigma had to take the stage again. This time to decide who would take the coveted second spot behind Vici Gaming and advance to the Group Stage.

The Bo1 tiebreaker opened with two solid drafts on both sides. Although Amer "Miracle-" Al-Barkawi on an Invoker in mid is always a sight that should strike some fear into an opposing side. Still with FlyFly on a Death Prophet and Emo on Morphling, it looked like both teams had their fair share of comfort heroes for the cores.

As the game started, Invictus came in aggressive, taking first blood and the second kill in the game’s opening minute. But Nigma were not phased by the early pick-offs, and our teams managed to come out even in the lanes. It was as the game moved into the mid-phase that Nigma really began to take control. Maroun “GH” Merhej deserves some special mention here. He was a massive part of Nigma’s path to victory on his Elder Titan, going 7/3/14, providing some truly devastating support.

After 28-minutes, it was clear there would be no come back for Invictus. They called GG, and Nigma took the crucial win to keep themselves in the running at Kyiv.

Here's the final standings after the Wild Card stage: 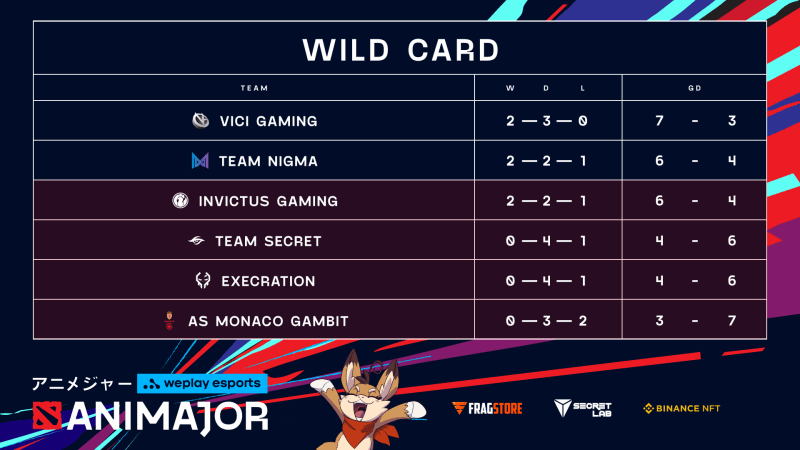 Of course, there were plenty more thrills and spills through the Wild Card stage. If you missed any of it, do yourselves a favor and catch up on the VODs over at WePlay’s official Twitch channel or on YouTube.

With the Groups about to kick-off and our teams truly on the way to becoming the legend, we’re excited to see what memorable moments the AniMajor will bring us next!

Be sure to stay tuned to ESTNN for more coverage from Kyiv!