Virtus.pro and VP.Prodigy are taking the Europe and CIS leaderboards by storm.

Quarantine might have slowed some teams down, but not Virtus.pro’s Dota 2 rosters.

Despite the pandemic severely limiting participation in global LAN events, and the DPC taking a season off, the Dota scene has still seen plenty of tournament action in the form of online events. As a result Europe and CIS have temporarily joined up to form a single region for online events.

Since March 1, Virtus.pro have played in nine series, including charity events like the WeSave! Charity Play and the Gamers Without Borders Tournament. VP.Prodigy, the orgs second Dota 2 roster, have also played in five events since April 1. And they’ve been taking the wins home.

Top-3 on the leaderboards

So far, since March the main Virtus.Pro roster has taken home $280,000 USD in winnings. The second spot out of all CIS and European teams. This number includes their victory at ESL One Los Angeles 2020, which netted them a cool $60,000 USD. 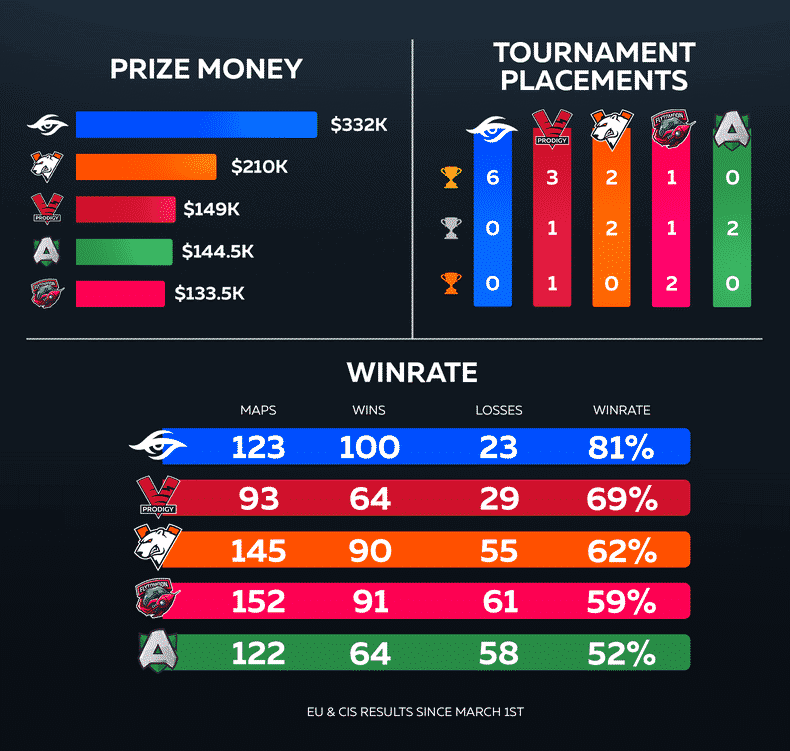 As for VP.Prodigy, they’ve also been making bank. Their cumulative winnings from April have now reached $149,000 USD. Including their big payout for their first-place victory in the Epic Prime League. That win scored them $65,000 USD.

It’s not just the earnings where they’re dominating either. Their win rates are pretty impressive too. VP’s main roster played 145 games with a 62% win rate, while VP.Prodigy have a 69% win rate across 93 maps. The only team at the moment with a higher win rate across the European and CIS regions is Team Secret.

Another interesting thing to note about Virtus.Pro’s recent slew of victories is how quickly they’re stomping their opposition.  While VP’s main roster has always been known for their aggressive play style, this year it’s really been something else.

From March 1, Virtus.Pro played seven games that lasted 20-minutes or less. With some matches ending in as little as 15-minutes.

Virtus.pro’s General Manager, Sergey Glamazda, is certainly proud of everything the squads have achieved during what is an uncertain time in esports.

“The lockdown proved to be an interesting timeframe for the organization,” Glamazda explains. “We experienced changes inside one roster and simultaneously acquired another line-up where the players barely even met each other live”.

Despite the difficulties, Virtus.Pro’s rosters have performed more than admirably. Although Glamazda note, “knowing the inside chemistry of the team, I can safely say that guys expected more and practiced for other results”. While second and third places are nothing to scoff at, both of VP’s rosters are hungry to take the top spot.

Glamazda also made sure to mention the impact that support from fans at home has on their rosters. “I’m thankful to all the fans for supporting our teams. Your support brings us energy and certainty, and your constructive criticism gives another point of view on the things we do.”

You can catch Virtus.Pro’s main roster playing in the EU and CIS division of the OG Dota Pit: Season 2. The tournament kicks off July 27.