Thunder Predator have proven their wild card potential, but the SA squad have a tough deck to beat.

Things have been heating up in the SA scene for the past couple of years. One team that’s been making a name for themselves in the region is Peruvian squad, Thunder Predator.

Originally formed in 2016 and playing under the banners Thunder Awaken, the team scored a sponsorship from Acer’s Predator brand of Gaming PCs and started flying their new flags as Thunder Predator in 2018.

But it was 2020 and the peak of the pandemic that really saw the team come into their own. They took 2nd place at ESL One Thailand 2020: Americas, then followed this up with several online tournament victories.

The new format of the DPC season in 2021 saw them fight through the Upper Division of the South American region in Season 1. They took 2nd place, qualifying straight to the Group Stage of the ONE Esports Singapore Major. 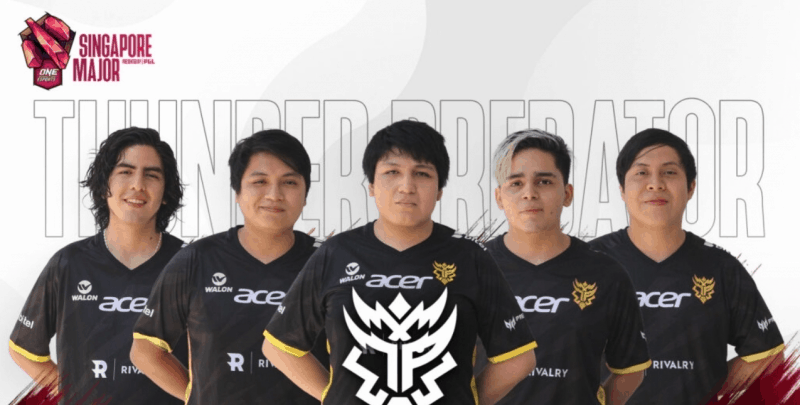 The team made it through the Round Robins to the Playoffs, falling to the Lower Bracket after facing Secret on Day 1. Still, TP managed to hold their own until Round 3 of the Lower Bracket. Eventually falling to Invictus Gaming to take 5-6th place at the tournament.

Season 2 of the DPC saw the team face tougher odds on their home turf. Beastcoast and No Ping Esports edged them out of their chance to shine at the WePlay Animajor. They ended the second season of SA’s DPC 3rd in the standings. Still, the finish gave them enough DPC points to guarantee themselves an invite to TI 10.

MoOz cut his teeth in the SA scene, originally starting out with Gorillaz-Pride back in 2017, as well as both coaching and playing with beastcoast during their 2020 online season.

Romel "Mjz" Quinteros played for Gorrillaz-Pride during their 2018 season. Then joining Infamous.Young and climbing up the ranks to the org’s main squad in early 2019, before finally settling with TP in July of that year.

Thunder Predator’s core line up brings a lot of aggression and style to the field. Frank’s signature Batrider has proven more than once that he’s a force to be reckoned with. While Leonardo "LeoStyle-" Sifuentes has shown he has the chops as one of SA’s top solo mid players. Both he and TP’s position 1 carry, Alonso "Mnz" León, have been part of South America’s Dota 2 scene since 2015. Mnz played for Team Unknown during their run at the Frankfurt Major in 2015. And in the past LeoStyle- has played with other regional heavyweights such as Infamous and EgoBoys.

Can Thunder Predator win The International 10?

While nothing is impossible at a TI, the truth is TP have some tough competition to chew through if they want to lay hands on the Aegis of the Immortals and their share of the USD $40 Million prize pool.

While they’ve proven themselves among the very best in the South American region, the current incarnation of their squad is largely untested on the international stage.

However, there is still a lot of uncertainty surrounding the rosters of several teams thanks to the ongoing problems caused by the pandemic. With two-time winners OG playing without Ceb in the offlane, and players from both Aster and Invictus Gaming testing positive for Covid-19, Thunder Predator might not be facing everything this TI was originally going to throw at them.

There’s only a few more days before games kick off in Bucharest. Although we can expect the stadium to be a lot quieter than usual, we’ll still be able to catch all of the excitement and action on our screens.

Don’t forget to stay tuned to ESTNN as we bring you all the highlights and news from Dota 2’s premier event.