Secretlab and OG are teaming up, and they’ve released swag to celebrate.

“We’re confident this partnership will take our entire organization—including our OG Seed and CS:GO rosters—to the next level.” Said Johan “N0tail” Sundstein, CEO and Captain of OG.

It sounds like good news for OG’s headquarters. But the swag Secretlab are rolling out isn't just for them.

The whole seat has been designed with the team at the forefront. The colour scheme matches OG’s logo; navy-blue base with white and silver accents. And it’s hard to miss the two Aegis icons, intricately embroidered into the backrest. A visual reminder that OG are the only Dota 2 team in the world to have secured back-to-back victories at TI. 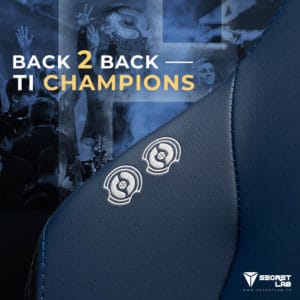 “Secretlab, as a gaming product leader, has always been at the forefront in helping gamers perform better.” Said N0tail, commenting on how the company have put their heart and soul into creating chairs for every gamer. According to him, this commitment was part of what resonated so deeply with the team. And why Secretlab were ‘the perfect partner’ for OG.

The new Secretlab #DreamOG edition chair incorporates the latest tech and upgrades from the company’s 2020 Series, engineered with professional gamers in mind. Available in two models, the OMEGA and the TITAN. The special edition seat can be pre-ordered through Secretlab’s website.