Melee Vs. ranged heroes is a heated topic in the Dota 2 community, so why not join us as we compare the pros and cons of both. The hero pool in Dota 2 has dozens of playable characters who can shape decisive battles in the game. These heroes are mainly categorized into melee and ranged heroes. If you’re new to Dota 2, finding out the different aspects of these heroes can make an impact on your gaming.

Why choose melee heroes in Dota 2

Melee heroes can use their weapons as extensions of themselves. Most of the heroes that have melee attacks can pierce through the armor of their enemies, slow their movement speed, or disable them in battle.

Durability is an added advantage for melee heroes. Players who prefer tanking damage from opponents can choose melee heroes to absorb much of the attacks from incoming spells. These heroes usually have higher HP than ranged heroes and can survive longer during team fights.

A few items in the game grant bonus damage and unique abilities to melee heroes. If you like playing melee heroes, Echo Sabre and Battle Fury are items that can make it easier to level up and farm. Passive abilities of items, such as Echo Strike and Cleave, can give melee heroes a tactical advantage on the map.

The latest 7.31D update for Dota 2 was released in June 2022. It made several changes to the game mechanics, and hero stats, and rescaled many aspects of hero abilities. Take a look at the top melee heroes you can choose in the game. 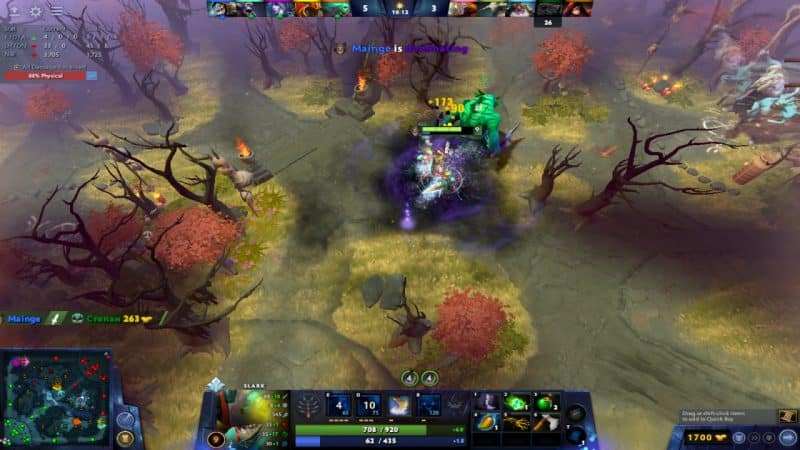 Slark is a melee hero with skills that allow players to play the carry role in Dota 2. The agility hero has increased base attack damage in 7.31D.  His ability, Pounce, lets him grab on to enemies and keep them from running away from battles. Dark Pact lets him debuff spells and stuns in a matter of seconds.

The impressive attack speed of Slark can be used to slice away at his opponents with physical attacks. A fury of attacks can be unleashed on enemies that can drain them of their stats due to Essence Shift. Shadow Dance, the ultimate ability of Slark, helps him heal quickly after life-threatening skirmishes.

Legion Commander is a Strength hero who is capable of taking out multiple enemies in team fights. The melee hero can become a mighty adversary in battle as she slits through the health of her foes to recover her own.

She can use the strength of her enemies against them when she is outnumbered with Overwhelming Odds. Her ability, Press The Attack, gives Legion Commander bonus attack speed and health regeneration to sustain attacks during battles. Duel, the ultimate ability of Legion Commander, grants her permanent damage gain from each successful encounter. Items, such as Overwhelming Blink and Blade Mail, can make her unstoppable in the game. 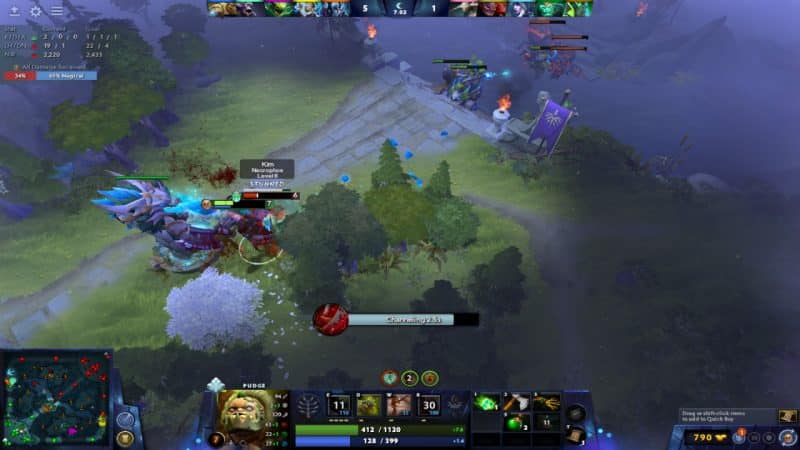 Pudge is a terror to Dota 2 players on the map. The melee hero gains health with every hero he kills. He can easily disable his enemies and hold them in place to let his team destroy opponents during team fights. Pudge has a base health of 700 HP from the start of the game, making him a mighty tank hero in Dota 2.

He can pull enemies towards him using Meat Hook, a useful ability that can clench melee and ranged heroes from a vast distance of 1300. Getting an Aether Lens for Pudge can extend the range of his skills further, enabling him to hook enemies from hidden locations. Pudge can separate foes from team fights, allowing his team to ambush them at any time.

Why choose ranged heroes in Dota 2

Ranged heroes can hit their enemies from a distance and stay away from melee heroes during the game. These heroes can use the distance from their enemies to their advantage by using spells and attacks that can derail them. Ranged heroes are equipped with abilities that let them hunt heroes and escape tough fights with ease.

You can use certain items to increase the range of your attacks. Dragon Lance is an item that you can purchase to extend the range of your heroes by 140. Ranged heroes, such as Sniper, have an exceptional range to their physical attacks that let them deal massive amounts of damage without being hit. Buying Dragon Lance for Sniper and other ranged heroes can give them the edge they need to stay safe during team fights.

It is also easier to heal from items for ranged heroes. The regeneration from items that include Clarity, Tranquil Boots, and Urn of Shadows can be harder to disengage when you are a ranged hero in Dota 2.

Ranged heroes can be safer to fight with for beginners to the game. A majority of the ranged heroes in Dota 2 have less complex abilities that can be fun to perform during battle. Ranged attacks will allow players to kill creeps and neutrals without losing their health. Take a look at the top ranged heroes you can choose in the game. 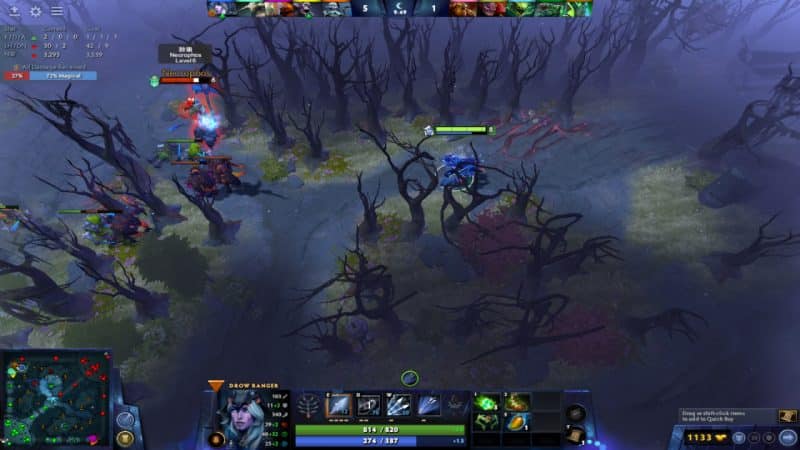 Drow Ranger is an Agility hero who can use her attacks to slow her enemies in Dota 2. She has an attack range of 625. Her ability, Frost Arrows, lets her use physical attacks to make her opponents crawl in battle. Drow Ranger gains additional damage from her Agility stats from her ultimate ability, Marksmanship. Ranged heroes in her team also get bonus damage when they are near her.

You can farm faster in lanes due to Marksmanship. Her ultimate ability gives Drow Ranger a 40% chance to instantly kill creeps from her physical attacks. She can also deal damage to several enemies at once using Multishot.

Sniper is an all-out carry hero in Dota 2. He has 550 base range on his physical attacks. His ability, Take Aim, grants him 400 attack range after leveling up. You can also activate Take Aim to get a 100% chance of landing a Headshot for 3 seconds.

His ultimate ability, Assassinate, has a 3000 distance cast range. It deals 700 damage to enemies and stuns them for 1.5 seconds. You can buy items, such as Maelstrom and Butterfly, to increase the attack speed of Sniper. New players in the game can choose Sniper to dominate the game from a distance without getting killed by melee heroes. 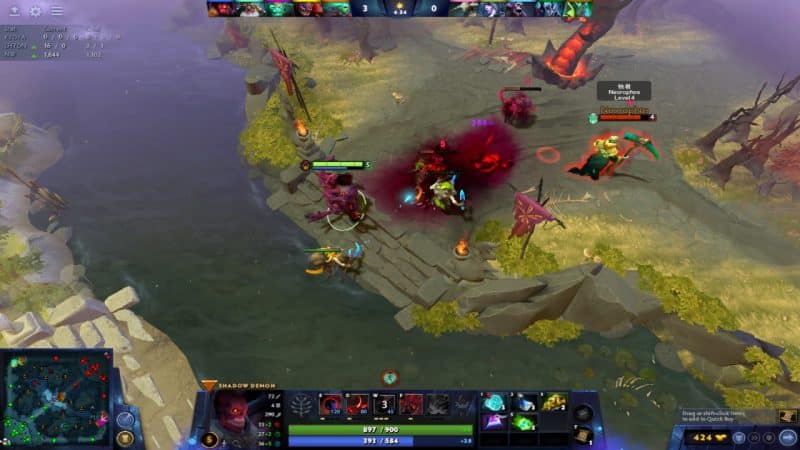 Shadow Demon is an Intelligence hero who can nuke his enemies early using his spells. Shadow Poison is a spell that can be cast multiple times to stack damage on enemies. You can release the damage stacked from Shadow Poison at any given moment in the game to obliterate opponents during team fights.

Melee heroes who are fast on their feet can be banished in a second using Disruption. Shadow Demon will also gain control of illusions of the banished heroes for up to 14 seconds. His ultimate ability, Demonic Purge, can slow his opponents and deal damage to them from a distance.