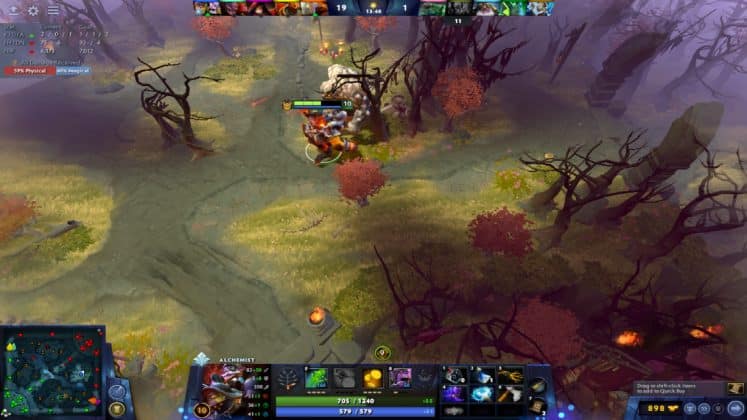 You can increase your GPM with the Alchemist by using a number of precious items to turn the hero into a money-making machine.

Dota 2 has a few basic concepts that players need to keep in mind while playing the game. The gold per minute (GPM) is an important statistic in the strategy game and players with higher GPM can purchase their items faster. Alchemist is a strong carry hero who can make more than 600 GPM with the right inventory. Here’s how you can increase your GPM with Alchemist in Dota 2.

Alchemist is known for his skills of farming fast in lanes. He has an outstanding set of skills that can turn waves of creeps to gold within seconds. The melee hero has a higher attack rate compared to other Strength heroes in the game.

You’ll need to increase the attack speed of the Alchemist to give him adequate accuracy to farm for his core items. Besides being able to farm items quickly on the map, the Alchemist can also make and deliver Aghanim’s Scepter upgrades for his teammates.

Greevil’s Greed is a passive ability that grants additional gold to the Alchemist from creep kills, neutrals, heroes, and bounties. Each successive kill can provide the Alchemist up to 24 gold, drastically increasing the GPM you can make within the game.

Best Lanes to Farm for The Alchemist The melee hero has quite a few strategies that can be used to help the Alchemist make his gold. The mid lane is the best lane for the Alchemist and lets you easily kill 3 – 4 creeps per wave. If you’re going mid with the Alchemist, make sure you level up Acid Spray along with Greevil’s Greed to earn more gold.

The mid lane gives the Alchemist a better chance to pick up Bounty runes from the river and from the forest. A maxed out Greevil’s Greed can triple the gold you get from Bounty runes. You can buy a Bottle to replenish your health and mana after collecting runes from the mid lane. A Bottle will also provide the mana you need to use Acid Spray plenty of times while farming.

The first 15 minutes of the game can be crucial for the Alchemist. Depending on the lane you choose to play, you can buy early game items that will enable the Alchemist to increase his GPM. Quelling Blade can be bought at the beginning of the game. It provides 8 attack damage to the Alchemist. Taking last hits can be smoother with a Quelling Blade. You can destroy the ranged creep in the lane early before focusing on the melee creeps in each wave.

The early game item has an active ability that lets you chop trees. It can come in handy to chop trees while pulling creeps and getting out of spells like Sprout.

Phase Boots is a reliable early game item for the Alchemist. It gives the melee hero 45 movement speed, 4 armor, and 18 attack damage. Buying Phase Boots can help the Alchemist deal damage to enemy heroes and creeps while farming. It can also be faster to reach enemy heroes while using his ability Unstable Concoction.

Hand of Midas gives Alchemist 40 attack speed. You can use the additional attack speed to slash creeps in the lane. It also has the active ability, Transmute, that lets players instantly kill creeps and high-level neutrals for bonus gold and experience.

How to Farm with Maelstrom Maelstrom is an excellent weapon for the Alchemist. The item provides 24 attack damage to the Strength hero. Maelstrom has a passive ability, Chain Lightning, that gives the Alchemist a 30% chance to release a bolt of lightning that deals 160 damage to multiple enemies in a 650 radius.

It has a minimal cooldown on its passive ability, allowing the Alchemist to farm in lanes and jungles. If you’re going mid with the Alchemist, you can directly purchase Maelstrom to give him the attack damage he needs to farm and take out towers.

You can upgrade Maelstrom into Gleipnir and Mjollnir later in the game. Gleipnir adds attack damage and stats to the Alchemist, making him indomitable in battle. It also provides an active ability, Eternal Chains, that can root enemies in a 450 radius for 2 seconds and deals 220 damage to them.

Placing Static Charge on the Alchemist has a 20% chance to release a lightning bolt that deals 225 magical damage to his enemies. Static Charge can last up to 15 seconds, making it hard to counter his physical attacks. You can also cast Static Charge on your allies to protect them from any incoming damage.

How to Farm with Battle Fury

Battle Fury can do wonders for the Alchemist. You can gain 60 attack damage by purchasing Battle Fury. It can be a lethal weapon for melee heroes that need to farm in Dota 2. Battle Fury has a passive ability that deals 70% of the attack damage to surrounding enemy creeps and heroes.

How to Farm with Radiance Radiance can increase the GPM of any hero in the game. The Alchemist can add 60 attack damage from physical attacks and 60 magical damage per second from Radiance. You can make more than 500 GPM by taking on multiple waves of creeps in lane with the Alchemist.

If you run out of creeps on a lane, carry a Town Portal Scroll to move fast on the map. Buying a Boots of Travel along with Radiance will let you farm gold at an unprecedented rate. You have a higher chance of reaching 600 GPM using Radiance with the Alchemist than most other items in the game.

The Burn ability of Radiance provides a 10% chance that your enemies can miss their attacks while striking the Alchemist. Walking around the forest with Radiance will lure neutral creeps toward the Alchemist, saving players time while farming away from the lane.

If you’re running low on your health while farming in the jungles or fighting ancient creeps, you can turn on Chemical Rage to amplify your attack time and health regeneration for 30 seconds.