Dota 2: Battle Pass 2022 – How to Unlock Juggernaut in Cavern Crawl You can use these strategies to unlock Juggernaut in Cavern Crawl during Battle Pass 2022.

Battle Pass 2022 is attracting millions of Dota 2 players to put their skills to the test. You can participate in the ongoing Part 1 of Battle Pass between September 1 – November 2, 2022. A small portion of every purchase that you make during Battle Pass 2022 will go towards The International 2022 prize pool, making it one of the biggest events in gaming this year.

The assets bundled with the Battle Pass 2022 include Immortals treasures, Silkwing Spotters Observer and Sentry Wards, Pouches Courier, adorable Sprays, and in-game consumables. The Battle Pass 2022 also sees the return of Cavern Crawl, a fun and adventurous set of heroes that you can play to unlock mind-blowing skins for Juggernaut, Crystal Maiden, and Slardar.

Isle of Dragons Set for Juggernaut 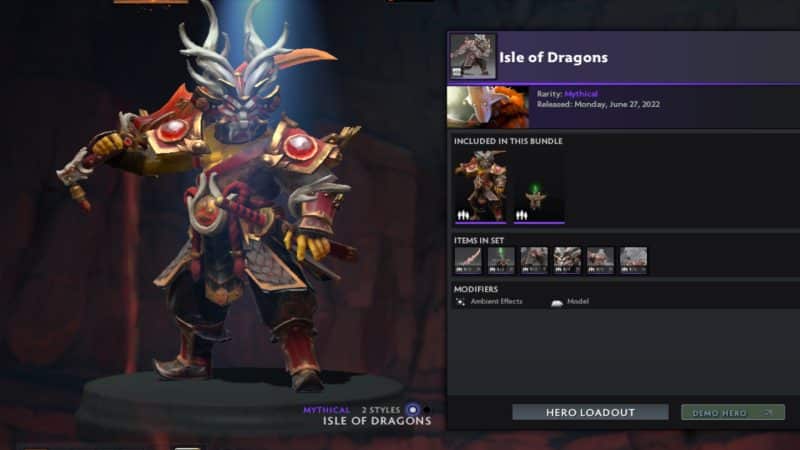 Juggernaut is an Agility hero with the ability to wipe out hordes of enemy units and heroes with his sword. The melee hero has a staggering 34 Agility at the start of the game and attack damage of 50 – 54. He can push lanes, take down towers, ambush enemy heroes, and escape life-threatening battles with his advanced skill sets.

You can play the carry heroes to unlock the illustrious Isle of Dragons set for the Juggernaut. These designated heroes are sorted at the top of the Cavern Crawl and require players with quick hands to be able to unlock the achievement in Dota 2.

The Headpiece of the Isle of Dragons skin has a set of grey antlers that stick out of the mask to terrify his opponents in battle. Juggernaut’s sword has razor-sharp edges that are crimson red. The handle of his sword has a miniature dragon head attached to it with a yellow bell hanging from its mouth.

The Back piece of the Mythical set has the tail of a dragon strapped to it. The Legs of the Isle of Dragon skin are inspired by martial arts and have a sturdy style that strengthens with each step that the Juggernaut takes in the game. The Healing Ward of the Isle of Dragons skin has 2 dragon heads protecting the lantern on either side. You can notice that the eyes of the Headpiece glow with a blue flame when the Transmuted style for the Isle of Dragons set is activated. Juggernaut’s sword is also covered by an electric aqua blue current, making it hard to keep your eyes off the Agility hero during the game. The Healing Ward of the Transmuted style also has an aqua blue appeal that gives it an iconic look for the Juggernaut.

Best heroes to unlock the Juggernaut in Cavern Crawl

You’ll need to prepare yourself to win matches with carry heroes to unlock the Juggernaut in Cavern Crawl. Carry heroes have to farm in lanes and the forest to craft items that can help them dominate opponents later on in the game. These heroes are particularly good at hunting enemies during mid game and taking control of lanes to avoid losing barracks.

Take a look at the best heroes you can choose to unlock the Isle of Dragons set for the Juggernaut in Cavern Crawl using the Battle Pass 2022. Clinz is a ranged hero with attacks that can strike enemies and slay them from hidden locations on the map. The Agility hero has a base movement speed of 290 and base armor of 3.7. He has an attack range of 600 and attack damage of 37 – 43. Clinz gains 2.5 Agility every time he levels up in the game.

The Agility hero can significantly increase his attack damage by using Searing Arrows in battle. Searing Arrows can provide an added 60 damage as a bonus to his physical attacks. Each attack with Searing Arrow enabled consumes 10 mana. You can buy items such as Void Stone, Orchid Malevolence, and Bloodthorn to increase the mana regeneration rate of Clinz in Dota 2.

Clinz can use Searing Arrows with Burning Barrage to shoot up to 6 arrows within 2 seconds. Burning Barrage has an 18 second cooldown and costs 90 mana to cast. It can also be used to hit multiple enemies in a row to take out opponents easily in battle. Items like Daedalus and Monkey King Bar can drastically increase the damage dealt to enemies.

Skeleton Walk is an active ability that can turn Clinz invisible for 40 seconds. It also provides 60% boost to his movement speed. Invisibility can break by using a spell or hitting enemies with a physical attack. Skeleton Walk has a reduced cooldown of 17 seconds and requires 80 mana. It can be quite useful to survive battles while going through the Cavern Crawl.

His ultimate ability, Death Pact, can be used on high-level neutral creeps to regain health in the game. Death Pact provides 80% of the health of the creep consumed and grants 12% of their attack damage for 65 seconds. You can use Death Pact right before entering a battle. Being invisible with Skeleton Walk after using Death Pact can help you catch enemy heroes off guard and eliminate them with quick strikes.

Troll Warlord is a ferocious beast in battle. The Agility hero can switch between melee and ranged attacks at any time in the game. His fast attacks make it hard to ignore the Troll Warlord during team fights. With a little time and a lot of farming, Troll Warlord can destroy his enemies without breaking a sweat.

Berserker’s Rage can be used to turn Troll Warlord into a melee hero. It grants him a bonus 45 movement speed and 7 armor, while Berserker’s Rage is activated. Troll Warlord has a 20% chance to ensnare enemies for 2 seconds. It also reduces the base attack time of his melee hits to 1.4 seconds.

If you’re playing Troll Warlord in Cavern Crawl, you should take at least one level of Fervor during the early game. Fervor is a passive ability that provides 15 attack speed for every successive physical attack. A maxed-out Fervor can grant up to 30 attack speed per hit, giving you a higher chance of ensnaring enemies and preventing them from fleeing fights.

You can obtain 80% bonus Lifesteal on his physical attacks and an additional 200 attack speed by using Battle Trance. His ultimate ability, Battle Trance, also provides up to 35% bonus movement speed while it is active. Battle Trance has a 70-second cooldown and requires 150 mana to be used. Troll Warlord cannot be killed while using Battle Trance.

The melee hero can drain the mana of his enemies with each physical attack. He can also use his physical attacks to slow down enemies who have their mana pool depleted. People having a tough time completing the challenges of Cavern Crawl can pick Anti-Mage to freely roam the map without getting killed.

He can use Blink to get in and out of battles at will. Blink has a maximum range of 1200, has a cooldown of 6 seconds, and consumes 45 mana. Anti-Mage can redirect magical spells back to enemy heroes using Counterspell.

Mana Void, his ultimate ability, lets the Anti-Mage deal 1.1 damage for every missing mana point. It affects all enemy units in a 500 radius, consumes 300 mana, and has a 70 second cooldown. You can reduce the cooldown of Mana Void by 50 seconds at level 25 through the Talent Tree.