You can put these strategies into play to Win with a Female Carry Hero in Cavern Crawl during Battle Pass 2022.

Millions of players are competing against each other to earn more battle points during the Battle Pass 2022 in Dota 2. People can get their hands on exquisite treasures, arcanas, emoticons, and other in-game effects by participating in the Battle Pass 2022 that has taken the world by storm.

You can play through the Cavern Crawl map with the Battle Pass 2022 to unlock Mythical sets for Juggernaut, Crystal Maiden, and Slardar. Cavern Crawl features Agility, Strength, and Intelligence heroes that you have to win with to get access to the Mythical sets.

You can complete the hero challenges in Cavern Crawl to earn treasure chests that provide bonus battle points to help you level up faster as you progress through the map. Here are the heroes you can pick to Win with a Female Carry Hero in Cavern Crawl during Battle Pass 2022. 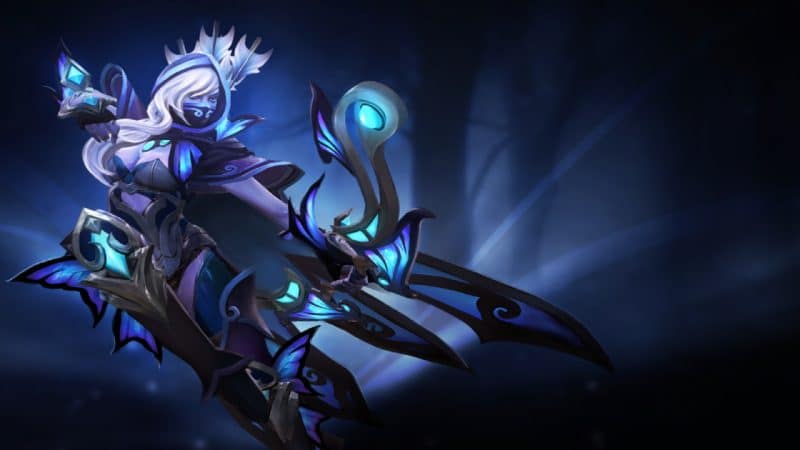 Drow Ranger is a ranged carry hero who can slow her enemies and shred them with her frost arrows. The Agility hero has base stats of 20 Agility, 16 Strength, and 15 Intelligence. She gains 2.9 Agility per level.

The recent changes made to Drow Ranger with the release of 7.32c has increased her base movement speed from 295 to 300. The movement speed boost will definitely help her chase enemies and reach her allies faster to win the game.

Drow Ranger can attack her enemies from a distance of 625. The off-lane is a good choice for the Drow Ranger as it helps her get more last hits while her opponents stack neutral creep camps near the Tier 1 tower.

You can place an Observer Ward near the Secret Shop to avoid getting killed early in the game. The Observer Ward in the off-lane will let the ranged hero level up and farm gold without getting ambushed by enemy heroes.

Dota 2 players can take at least one level of Gust before the game hits the 5-minute mark. You can use Gust to silence enemies for 3 seconds and knock them back for a distance of 450. A fully leveled-up Gust will silence enemies for up to 6 seconds.

You can hit enemies with Frost Arrows after using Gust to make them flee from battle. Gust has a cooldown of 13 seconds and needs 70 mana to be cast in Dota 2. You can reach level 15 to unlock the ability for Gust that enables it to reveal invisible units.

You can use Multishot to release 3 waves of arrows that deal bonus damage to multiple enemies in front of you. Multishot slows enemy heroes for 3.5 seconds. Drow Ranger can release a total of 6 waves of Multishot at level 25 through the Talent Tree. Multishot has a cooldown of 20 seconds and consumes 110 mana.

Marksmanship, Drow Ranger’s ulti, provides a 40% chance to pierce the enemy units with attacks that penetrate their armor. You will also gain an Agility bonus every time you level up Marksmanship.

Once Drow Ranger has learned Marksmanship, she can freely roam the map. Her ulti lets the Agility hero farm in the forest and decimate enemies with her physical attacks. You can upgrade Marksmanship with an Aghanim’s Scepter to hit nearby enemies with each attack.

You can buy a Dragon Lance within 10 minutes of the game to increase the attack range of Drow Ranger by 150. It will also provide 15 Agility, 12 Strength, and 240 health to the ranged hero.

Hand of Midas can be purchased for 2200 gold. Drow Ranger will gain 40 attack speed by equipping Hand of Midas in her inventory. She can also Transmute creeps every 90 seconds to gain bonus gold and experience.

Manta Style is an item that can help you Win with a Female Carry Hero in Cavern Crawl while playing Drow Ranger. The Agility hero can use Manta Style to create 2 images of herself to attack and annihilate enemy heroes in Dota 2. 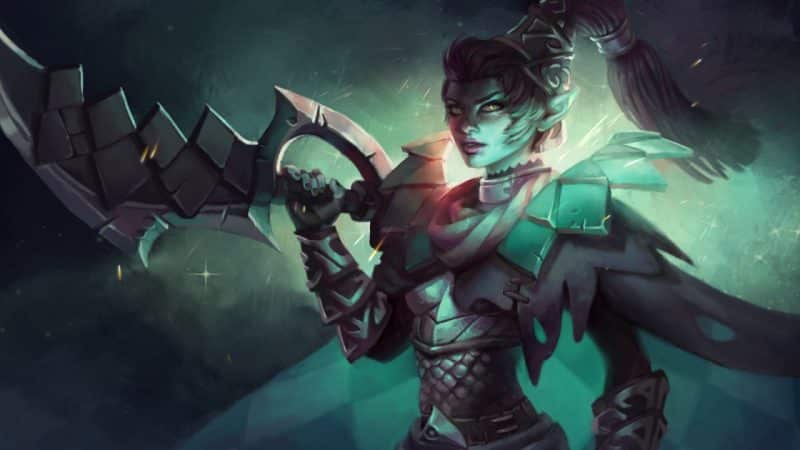 Phantom Assassin is a reliable carry hero. She can wipe out hordes of enemy units and slay multiple enemies after getting hold of her core items. Phantom Assassin has a base HP of 580 and base mana of 255. Her base stats include 23 Agility, 19 Strength, and 15 Intelligence. She gains 3.2 Agility per level, making her one of the fastest heroes in the game.

Her base movement speed of 305 can come in handy while pursuing enemy heroes on the map. Phantom Assassin can use Phantom Strike to move closer to an enemy unit in combat. Phantom Strike gives the Agility hero 170 bonus attack speed and 25% Lifesteal for 2 seconds. It has a reduced cooldown of 5 seconds and requires 65 mana.

Stifling Dagger can be used every 6 seconds to deal a portion of your attack damage to any enemy unit from a distance of 1150. It will also slow the movement speed of enemy units by 50% for 4 seconds. Stifling Dagger has a low mana cost of 30.

Phantom Assassin can evade incoming physical attacks by using Blur. Enemy heroes have a 50% chance to miss their attacks after you level up the Blur ability in the game. You can also use Blur to vanish out of sight during battles.

Her ulti, Coup De Grace, is a passive ability. It grants Phantom Assassin a 15% chance to deal up to 450% of her attack damage with her physical strikes. You can purchase items such as Desolator, Battle Fury, Monkey King Bar, and Daedalus to increase her attack damage and mitigate enemy heroes in a few nimble hits.

Desolator can be bought for 3500 gold in the game. It provides 50 attack damage and reduces the armor of enemy units by 6 for 7 seconds after getting attacked. You will also gain 2 damage for every enemy hero killed with reduced armor.

You can equip Monkey King Bar for Phantom Assassin to amplify the damage dealt in battles. Monkey King Bar costs 4975 gold in Dota 2. It provides 40 attack damage and 45 attack speed to its users. The item also grants a passive ability that gives an 80% chance to deal 70 bonus damage that can penetrate through evasion.

Daedalus is an item that can turn Phantom Assassin into a destructive force in Dota 2. The item grants 88 attack damage to the Agility hero and provides a 30% chance to deal 225% critical damage. Daedalus and Coup De Grace together can be used to decapitate enemy heroes before giving them a chance to strike.

Fan of Knives can disable the passive abilities of enemy units for up to 3 seconds. It also deals 16% of the enemy’s max health as damage during team fights. It has a cooldown of 15 seconds and consumes 50 mana.

Dota 2 has a large roaster of female heroes who are loved by its community of online gamers. You can choose Drow Ranger or Phantom Assassin to help your team gain an advantage by striking opponents with physical attacks that slow their movement and slit their health in seconds. These carry heroes can be frightening to deal with later in the game.

Make sure you pick Drow Ranger or Phantom Assassin to Win with a Female Carry Hero in Cavern Crawl during Battle Pass 2022. Finishing the challenge can also lead to treasure chests and Style Unlock Fragments for the Mythical sets that can be obtained in Cavern Crawl.