Get that much-needed rank boost with these easy tactics

As we have stated before, strat-calling isn’t just for the T-side as those playing at a lower level might think. Rushing certain points of the map while on the defense, using utility to make an aggressive move, or working together to hold an off-angle to catch an enemy by surprise are all parts of CT strategy. These are not just viable on every single map, but outright critical in certain situations and can easily turn the tide of a game.

After our foray into T-side strats for Mirage, which was preceded by CT-side strats for Inferno, we’re here with some creative ideas for defending on the most popular map in CSGO history. These are mostly easy to pull off/execute, so you can try them with your regular 5-stack or even some cooperative randoms. 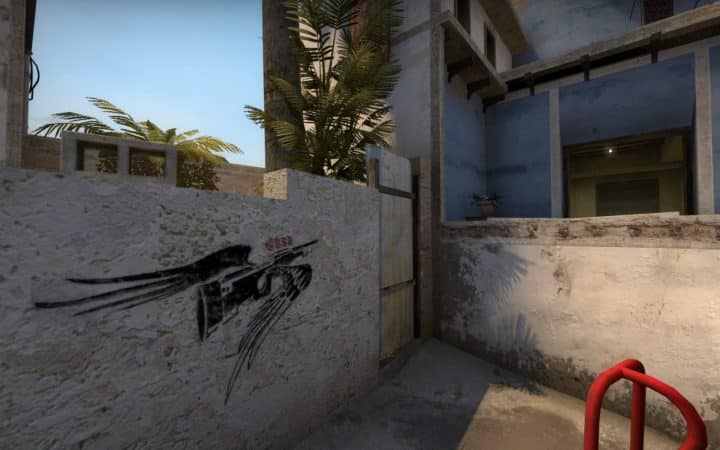 Mid, or any area designated as such is usually the most important part of the map it’s in. Mirage's own Mid, very similar to Dust 2's, is no different in this regard. Taking control of it gives a massive advantage to either side, and this is one of the most effective ways to do just that. You need two teammates – one to flash over the top of Connector and the other to flash and smoke the left side of Top Mid.

Meanwhile, you should head out of connector or Nest, but remember to dodge the first flash by walking backwards until it pops. Stick to the Catwalk wall until the smoke pops with both your connector and Nest teammates guarding you, and after the smoke is up, move forward and take up a position either in the small corner or behind the boxes. If you do the latter, make sure one of your teammates falls down to cover Underpass.

The A Ramp Rampage

Whether you call it Cave, Ramp, or A Main, it’s going to be one of the focal points of any Mirage offense, and unless the opponents are the cautious kind, there's a strong chance they will be pushing this position early. Even if they don’t push quickly, there’s a chance that at least one of them will be there ready to be traded out and with a lovely weapon equipped that’s just begging to be picked up. On Eco Rounds or half-buys, you can throw a couple of flashes (one above, one bounced off of the side wall) and push that position with up to 4 people. We say four because one person should hide in B in case they want to go for a fast plant seeing an A Ramp push. Alternatively, if the opponent is exploiting the area for fast pushes into A, you can do the same thing with a couple of HE grenades alongside the wall-bounced flashbang.

The Sneaky A Hold

Remember that sneaky B strat? This is similar, but in A. The reason we say it’s similar but not the same is because it involves proper weapons — although it can also be done on the Pistol Round. This one involves a little more contact play as there aren’t enough safe hiding spots in A, but it can be just as devastating if it works out — just make sure your aim is absolutely on point.

Have one person in Ninja, one person under Palace, and one more hiding behind Triple. The other two can be in Nest and B as usual. When the T-side executes into A, don’t get out and don’t fight. Wait for them to start fighting the player under Palace (if they Molly there, the player should smoke it out and cause the T-side to be paranoid about the area. When they’re busy, have the player in Nest throw a flash towards Tetris, and get out together and mow down as many as you can.

The underpass pass rush is pretty common — to the point where most people expect something along those lines. However, what’s less common is tricking the opponents into thinking that no one dropped down when someone did. This might not be extremely effective, but it’s certainly a good way to disrupt the round, grab a weapon or two, do some economic damage, and maybe even eke out a win. Have a player get down there (or do it yourself) and hide in the shallow cubby to the left. Next, throw a smoke near them from inside Nest. Any Terrorists pushing into Underpass early will assume someone’s on the other side and spam their hearts out only to hit nothing. Once the smoke clears, they’ll see that there’s no one there. As soon as it’s gone, throw a pop flash behind your hidden teammate, and voila. The good thing about this strat is, even if no one comes to Underpass from B Halls, the player down there can fall back and help Mid out.

Every T-side player with half a brain expects a push into Palace from the CTs from time to time, but what they don’t expect is a totem. The reason this is quite effective is that there will almost never be more than one or two Terrorists in Palace, so you’re likely to find a good trade and some solid map control. This can be done in the Pistol Round, Eco Rounds or a Buy Round, but it’s preferable that you have something long-range.

Have a teammate rush Palace with you, but remember that one of you must get there using the boxes while the other uses the ladder. When you’re both up, crouch-peek and hold the typical Palace rush angle, but have your teammate on your head for double the firepower. If you do manage to get a kill or two, clear out the rest of Palace but don’t just stay there because the T’s take advantage of a lighter B Site. Oh and, always make sure someone uses an Incendiary on A Ramp and then smokes it off, because otherwise you’re both potentially as dead as disco.

The B Stack Sacrifice

B Site stacks on Mirage are nothing new — they’ve existed in many shapes and forms since the days when the map was known as cpl_strike. However, this one involves giving your opponents the false impression that they’ve cleared the site. To begin, you need four players in B and one in A. The player in A needs to have two flashbangs, and must flash A Ramp above and below to give off the impression that an A rush might be taking place. Meanwhile, most players in B must hide; one near the van but hugged up against the B Plat wall, one behind Bench, and one boosted inside the site. The person boosting must then hold Apts from a usual CT-side B angle. If everything goes as planned, the Terrorists will push into B, kill the bait, and fall right into the jaws of the campers — just make sure you don’t peek too early, because you need to sell the idea that the site is empty. When you do fight, fight together.

Join us again for more cool strats next time, when we cover the polarizing map that is de_nuke.