Valorant has been out for a while now but with every balance patch comes a slight shift in the gun meta.

Riot Games pride themselves on creating an environment where any player can shine — especially if you’re skilled enough with certain weapons. However, some guns are just so superior compared to others you may not require an elite level skill to wield them effectively. In this guide, we discuss the hierarchy of Valorant’s guns within a tier list format.

Before getting into the tier list itself, let’s break down the analysis behind where some guns fall in the tier list and why. Understanding the tier list is very simple; the higher a gun is on the list, the more powerful it is across all skill brackets. This tier list does not necessarily account for variables such as agents, map, round or level of play. The categories used relate to the average level of play and how much bang for your buck a gun can provide in most situations.

It is also important to note that using certain weapons that are lower on the tier list isn’t necessarily a bad thing. The tier list is a resource to help you level up your knowledge of the game’s weaponry and shouldn’t dictate what guns you should use exclusively.

S-tier: The best of the best within the game. S-tier category guns are versatile for most situations and have the highest damage values in every range.

A-tier: Cost-effective variants of the S-tier category guns. What they lack in raw power is made up for cheaper costs and high damage within medium range.

B-tier: Guns within the B-tier are niche weapons that are typically only useful within a small handful of situations. These weapons suffer severely at long range or extended fights.

C-tier: In the average battle, C-tier weapons are going to lose out to similarly priced weaponry. With enough skill and perfect conditions, these guns can still be useful.

D-tier: D-tier guns aren’t useful for a variety of factors including nicheness, damage values and credit cost. There are many weapons that are better for a similar price.

E-tier: Slightly better than F-tier. E-tier weapons are only useful when you just need to spray and pray a short angle. Outside of that situation, these guns aren’t very effective.

F-tier: In a gunfight, guns within the F-tier category should be completely avoided if possible. 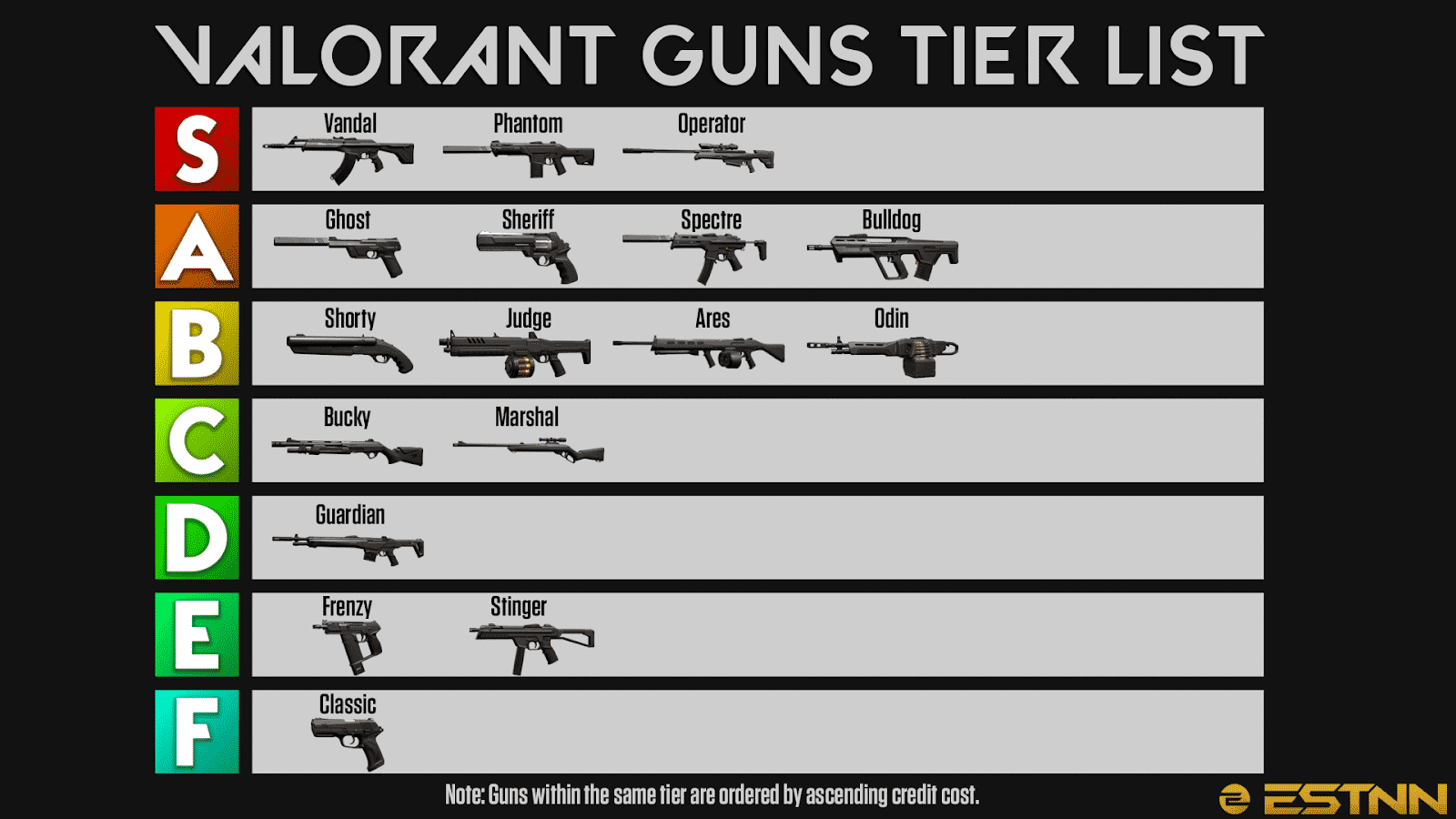 Unsurprisingly, the top of the tier list is dominated by the Vandal, Phantom and Operator. These guns are staples in the game and are useful in nearly every possible situation thus making them S-tier. They are incredibly cost-effective and reward you with tons of power after purchasing them. This trio of weapons should be your goal to hit during the game.

Falling just below S-tier, the Ghost, Sheriff, Spectre and Bulldog are the younger cousins of Vandal, Phantom and Operator. In all levels of play, players can find success with these guns with relative ease. There are many different situations where these guns can thrive just as well as S-tier competitors and can even be debated to become S-tier themselves. We feel more comfortable labeling these weapons as A-tier because in a standard fight, they’re most likely going to be outclassed by the S-tier guns.

B-tier weaponry is among the most niche, yet surprisingly useful guns in the game. The Shorty, Ares, Judge and Odin populate this category as the off-meta weapons that can find success in some aspects. But they also have a critical flaw — they all suck outside of medium range. With poor damage values and accuracy, your best bet when using these guns are to hide behind a corner and hold a close angle to maximize effectiveness.

Moving onto the C-tier, the Bucky and Marshal find themselves right in the middle of the pack. Both of these guns fall into a weird limbo category where they’re exceptional for their cost in skilled hands and perfect situations. Yet outside of those two variables, they tend to be pretty lackluster in general play or find mixed results at best. Even on an “eco” round (where you try to save as many credits as you can), there are much better weapons for less or just a few more credits.

The lone weapon that sadly finds itself within the D-tier is the Guardian. Now the Guardian may seem like a great weapon in the hands of a marksman. But its cons far outweigh its few pros. For 200 credits more, you can essentially get an automatic Guardian with the purchase of a Vandal or a Phantom. You’ll also get just over double the magazine capacity as an added bonus. Even if they know you for your one-taps, spend the extra credits and buy a weapon that will actually help you win a prolonged gunfight.

At the bottom of the tier list is the Classic. Although a pretty well-rounded weapon, there’s a reason it’s a free pistol and it’s balanced accordingly. Outside of pistol rounds, the Classic struggles severely at longer ranges and against armored targets. You can find some success with the alternate fire at shorter ranges but avoiding the Classic is best, when you're able.

Please note that this tier list is current for Patch 1.05.